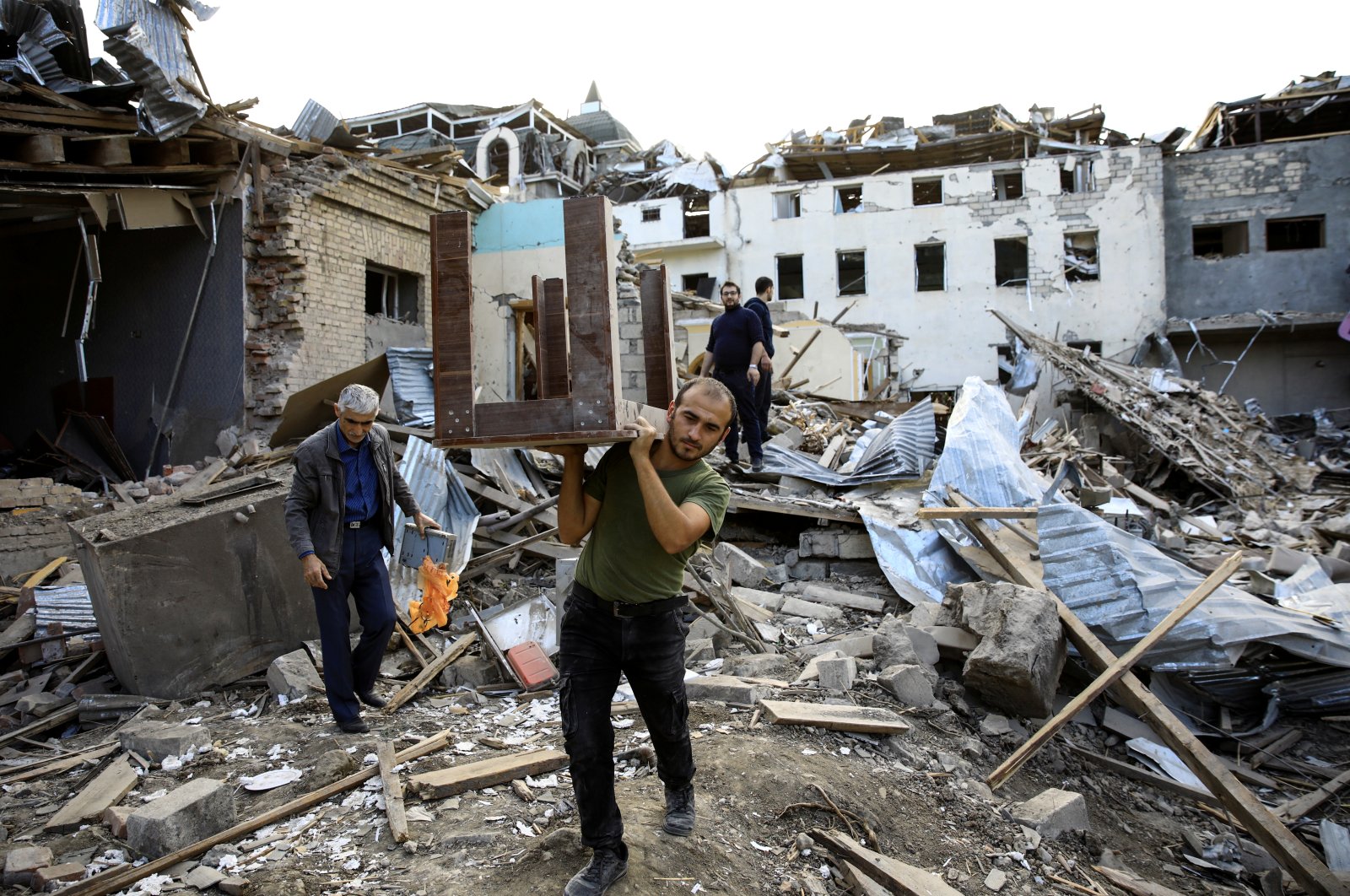 A man carries a table away from ruins at a blast site hit by a rocket during the fighting over the breakaway region of Nagorno-Karabakh in the city of Ganja, Azerbaijan on Oct. 11, 2020. (Reuters Photo)
by DAILY SABAH WITH AGENCIES Oct 12, 2020 1:21 pm
RECOMMENDED

The Azerbaijani military thwarted Armenian attacks, conducted in violation of a cease-fire, aimed at recapturing the former's military positions, the Defense Ministry of Azerbaijan said in a statement Monday.

Small groups of Armenian forces carried out the attacks in the direction of Aghdara, Tartar, Fuzuli and Jabrayil, according to the statement.

Azerbaijan killed many Armenian soldiers and destroyed a T-72 battle tank and three Grad missile as Armenian artillery units withdrew and some of its personnel fled after leaving military vehicles behind, the ministry also noted.

Armenia opened fire on Azerbaijani civilian settlements in Agdam, Tartar and Goranboy provinces, the ministry said in a separate statement.

The ministry added that three Armenian drones were downed by Azerbaijani forces, two in the direction of the Tovuz region near the borderline and another one around the Agdam region on Monday morning.

It added that Armenia was spreading false information by saying Azerbaijan continued military build-ups to gain control of Hadrut, where intense clashes were allegedly taking place. This region had already been liberated by Azerbaijani forces, it said.

The Azerbaijani army acts in compliance with the cease-fire and does not actively hold any war activities, it stressed.

Despite Azerbaijan's strong resistance, Armenia continues to target civilian settlements. An Agence France-Presse (AFP) correspondent in the Azerbaijani town of Barda, not far from the front line, confirmed by saying they heard thumping echoes of shelling Monday morning.

The cease-fire between Azerbaijan and Armenia did not survive a full day, as Yerevan launched an attack on Azerbaijan's second-largest city, Ganja on Sunday.

Taking place in less than 24 hours from the cease-fire deal, Armenian missiles hit civilian settlements in Ganja, where search and rescue work continued among the wreckage.

Although Yerevan immediately denied the attack, footage from the area confirmed Azerbaijani statements, with a Reuters photographer in Ganja witnessing rescue workers carrying one dead person from the ruins of a large apartment building on Sunday morning. The structure was almost leveled, the photographer confirmed, as excavators cleared the debris. Buildings and cars in the immediate vicinity had also been severely damaged, the photographer added.

Azerbaijan's public chief prosecutor's office announced Monday that 41 civilians were killed while 207 others have been injured in these attacks. Some 1,185 houses, 148 civilian facilitates and 57 apartments have also been destroyed in the attacks.

A cease-fire between the warring parties was agreed on to start at noon on Oct. 10 and was announced following 10 hours of talks in Moscow. The talks between the foreign ministers of Armenia and Azerbaijan were held upon the invitation of Russian President Vladimir Putin, who brokered the cease-fire in a series of calls with President Ilham Aliyev of Azerbaijan and Armenia's Prime Minister Nikol Pashinian.

Armenia said it was open to a cease-fire, while Azerbaijan previously made a potential truce conditional on the Armenian forces' withdrawal from Nagorno-Karabakh, arguing that the failure of international efforts to negotiate a political settlement left it no choice but to resort to force.

As a response to the attacks, Aliyev said Sunday that the Armenian administration is responsible for "all these crimes," adding that Azerbaijan has no reservations reiterating the statement for all.

"The attacks are a disrespect to the negotiations mediated by Russia and yet another reflection of the Armenian fascism," the president continued and highlighted that the attacks will not break the will power of the Azerbaijani people.

The violation of the cease-fire caused a reaction among the international community as well. The mediator of the cease-fire, Russia, warned Armenia on Monday that the country was not complying with the deal.

Similarly, the spokesperson of the Iranian Foreign Ministry Saeed Khatibzadeh said Monday that Iran is concerned about the violation of the cease-fire in the region while condemning the targeting of civilians. He called on both Armenia and Azerbaijan to stick with international law and respect each others' territorial integrity.

The European Union's diplomatic chief on Sunday expressed his deep concern over reports of violations of a cease-fire by Armenia.

"We note with extreme concern the reports of continued military activities, including against civilian targets, as well as civilian casualties," EU foreign policy chief Josep Borrell, said in a statement.

The EU's 27 member states "urge the sides to ensure full respect of the agreement on the ground," Borrell added.

Borrell pushed the sides "to engage in substantive negotiations without delay under the auspices of the so-called 'Minsk Group.'"

While the fragility of the cease-fire worried the international community, Azerbaijan is still welcoming dialogue with Armenia in order to establish peace in the region.

Speaking on the issue on Monday, Aliyev expressed that he does not know when talks with Armenia would start. However, he added, he wants Turkey to participate in the negotiation process as well.

Aliyev said the Minsk group, formed to mediate the conflict and led by France, Russia and the United States, was biased, and that Turkey, which he described as a global power due to its involvement in Syria, Libya, and other international conflicts, must be involved in the solution process.

"Turkey is also a member of the Minsk group, why shouldn't it be among the co-chairs? Even if many Western countries do not want to accept it, Turkey's word is big, it's fully independent," he said.

Turkey's involvement in the peace process voiced by others as well as Luxembourg's Foreign Minister Jean Asselborn said Monday that Turkey must push for a cease-fire in Nagorno-Karabakh.

"I think the message from Luxembourg will be a call on Turkey, a NATO member, to help arrange a cease-fire quickly," he said ahead of a meeting with his EU counterparts.

Ankara, on the other hand, although not participating in the conflict actively, expresses support for Azerbaijan at every opportunity possible.

"Azerbaijan and Turkey are brothers," said Turkish Defense Minister Hukusi Akar on Monday, adding that Ankara will continue to do whatever is necessary to protect Azerbaijan's rights and establish peace.

"We need to ask: For 30 years, Azerbaijan waited for dialogue with Armenia. What have you done so far to this aim?" he asked, addressing particularly the Minsk Group and its incapabilities in establishing peace.