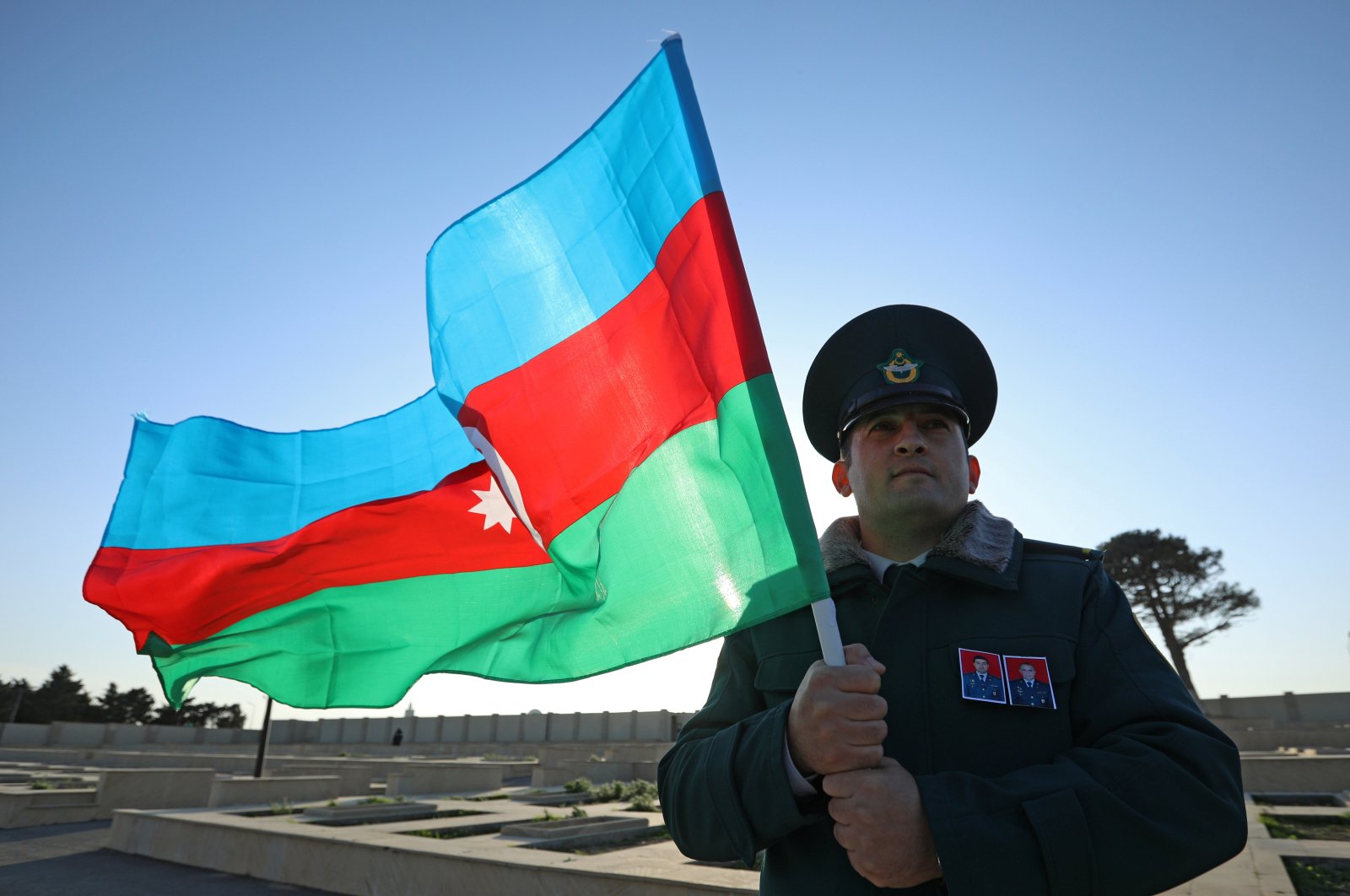 A service member holds the Azerbaijani national flag during a funeral service for servicemen killed in the crash of an Azerbaijani military helicopter, in Baku, Azerbaijan, Dec. 1, 2021. (Reuters Photo)
by DAILY SABAH WITH AGENCIES Dec 05, 2021 11:59 am
RECOMMENDED

Azerbaijan handed over 10 Armenian soldiers captured last month during clashes between the Caucasus arch-foes in exchange for maps showing the locations of landmines in the Karabakh region as part of an exchange mediated by Russia, Baku’s State Security Service said on Saturday.

After Russia-mediated talks, "Azerbaijan handed over 10 Armenian soldiers to the Armenian side," the Azerbaijani security services said in a statement, without giving a date for their release.

Armenia in exchange passed on maps of minefields it had planted in territory that Azerbaijan seized from it last year in the war for the Nagorno-Karabakh region, it said.

In a statement, the agency said the soldiers were detained while attempting a provocation in the border region on Nov. 16.

Armenia's Armenpress media outlet confirmed late on Saturday the names of 10 Armenian prisoners of war who had been handed over after being captured on Nov. 16.

It is the first concrete sign of a decrease in tensions between both sides since last month's fighting, which killed 13 people.

Those were the worst clashes along the shared border since a six-week war last year over Nagorno-Karabakh that claimed more than 6,500 lives.

Armenia and Azerbaijan agreed to a cease-fire at their border on Nov. 16 after Russia urged them to step back from confrontation following the deadliest clash since the war last year.

Armenia had asked Moscow to help defend it after the worst fighting since a 44-day war last year.

Earlier, Armenia gave Azerbaijan maps of 92,000 mines laid in Fuzuli and Zangilan provinces, and 97,000 mines in Aghdam, in exchange for the release of 30 Armenian nationals held in Azerbaijan.

Baku and Yerevan were involved in a 44-day conflict on Karabakh – a region that lies within Azerbaijan but was under the occupation of Armenia – last year, which ended with a Russia-brokered cease-fire on Nov. 10, 2020.

During the faceoff, Azerbaijan liberated several cities and 300 settlements and villages that were occupied by Armenia for nearly three decades. The cease-fire is celebrated as a triumph in Azerbaijan.