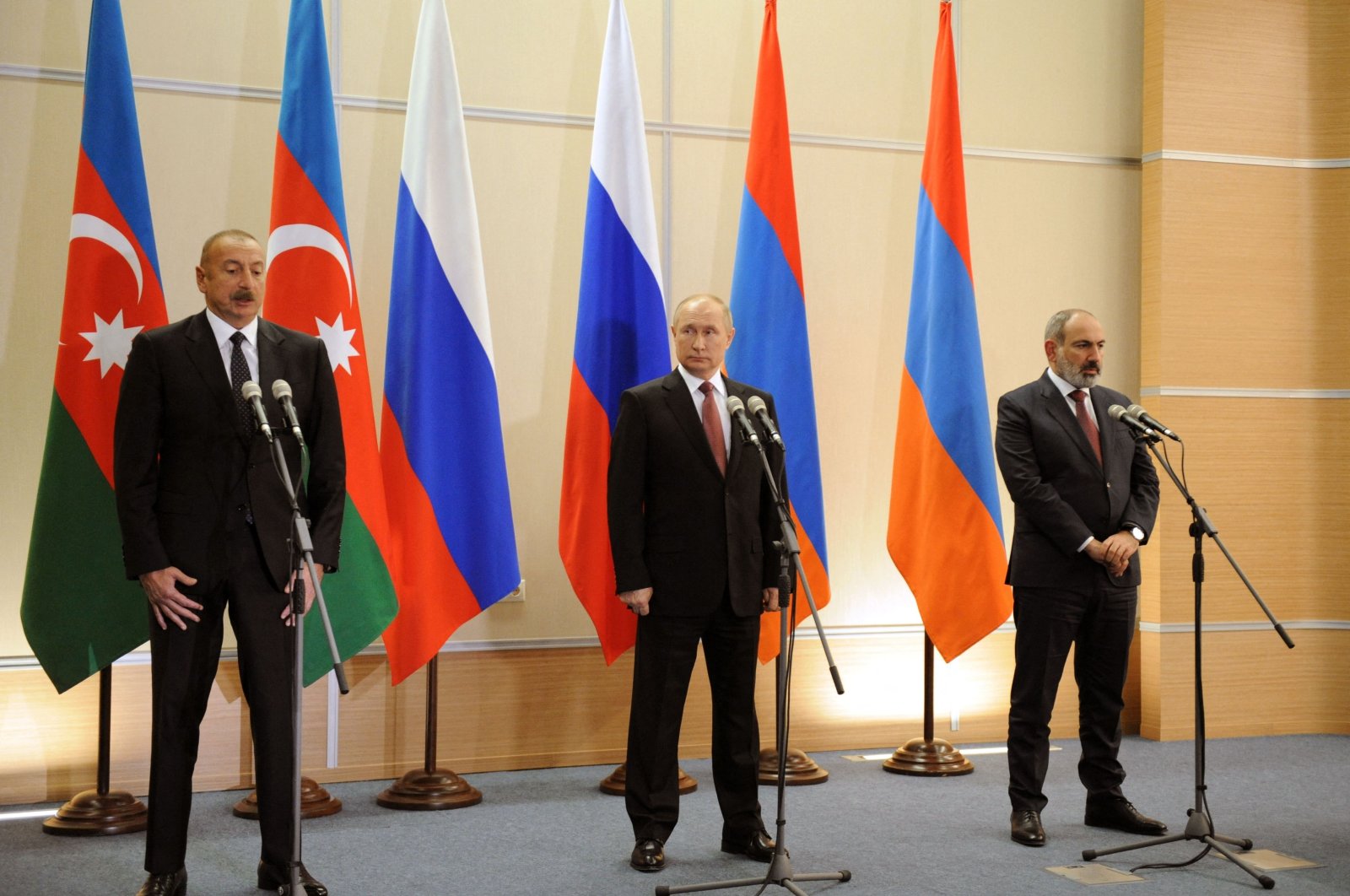 The leaders of Azerbaijan, Russia and Armenia said the recent meeting was constructive and produced a series of agreements on key issues as the South Caucasus region will soon be the scene of new projects and transport links

Azerbaijan called for the start of the delimitation process between Baku and Yerevan, the country’s foreign ministry said Saturday, following a tripartite meeting a day earlier.

The meeting between Russian President Vladimir Putin, Armenian Prime Minister Nikol Pashinian and Azerbaijan’s President Ilham Aliyev in the city of Sochi lasted about three hours and marked the first anniversary of a Moscow-brokered peace deal that ended fighting in the region of Nagorno-Karabakh.

“In the post-conflict period, Azerbaijan called for the full implementation of trilateral statements, the opening of all communications in the region, the start of the delimitation process between the two countries and spoke from the position of normalization of relations based on international law,” the foreign ministry said in a written statement, adding that the Azerbaijani side will continue to take appropriate steps to implement the Nov. 26 statement.

Azerbaijan welcomed the talks, while Russia similarly said the meeting passed in a “constructive” atmosphere.

In remarks after the meeting, Putin said the three leaders “reached agreement on a whole range of issues,” which he considers “key.”

Both Aliyev and Pashinian echoed Putin’s positive assessment. The Azerbaijani president said the conversation was “open” and “genuine,” and the Armenian prime minister called it “positive.”

Putin also held two separate bilateral meetings with Aliyev and Pashinian on Friday, before and after the three-way talks. "We were part of a united state for centuries, we have deep historical links," Putin told the pair after holding separate talks with each of them.

"We should aim to rebuild them and nurture them in the future," he said.

He pressed the pair – who last met in January – to hold more direct contacts.

"The more contacts, including direct ones, the better," Putin said.

Putin welcomed the foes' planned meeting in Brussels on Dec. 15, saying he had discussed the matter with European Council President Charles Michel.

Opening the meeting with Pashinian and Aliyev on Friday, Putin said that Armenia, Azerbaijan and Russia “achieved a lot” in the year that passed since the peace deal was signed. There is no large-scale fighting, some 53,000 refugees have returned to their homes and Russian peacekeepers have been ensuring the safety of the Nagorno-Karabakh residents, he said.

In their opening remarks, both Aliyev and Pashinian said they were prepared to start the work on delimitation and demarcation of the border.

After the meeting, Putin said that the three leaders agreed to create, before the end of the year, mechanisms for delimitation and demarcation of the border between the two countries.

Armenia’s prime minister also said the issue of prisoners of war, hostages and other persons held in captivity remained unresolved.

Aliyev, in turn, said that Azerbaijani authorities have publicly offered to start working out a proper peace treaty with Armenia “to put an end to the confrontation, to recognize each other’s territorial integrity, sovereignty and live as neighbors in the future, (or) learn to live as neighbors all over again.”

He also said Friday that Azerbaijan has handed over more than 100 prisoners of war to Armenia since last year’s fighting in Nagorno-Karabakh.

Armenia and Azerbaijan have been locked in a decades-old dispute over Nagorno-Karabakh, a region that lies within Azerbaijan but was under the control of ethnic Armenian forces backed by Armenia since a war there ended in 1994.

The Azerbaijani military routed the Armenian forces in 44 days of fierce fighting in the fall of 2020, which ended with a Russia-brokered peace deal that saw Azerbaijan gain control of a significant part of Nagorno-Karabakh.

The 2020 deal envisaged a transport corridor via Armenia that would link Azerbaijan with its exclave of Nakhchivan – a plan resented by the Armenian opposition, which also fears that Armenian interests could be compromised by the planned demarcation of the border.

They also discussed “unblocking of the transport corridors, which includes both the railways and the roads,” and made “significant progress” on unspecified “humanitarian issues,” Putin said.

"Everyone – including Russia as a neighbor – is interested in establishing the (transport) links," he said in comments before the talks.

Baku and Ankara have pressed actively for the reopening of a historic land link uniting Azerbaijan with its exclave of Nakhchivan and further on to Turkey via Armenia's Syunik province, as stipulated in last November's cease-fire agreement.

Russia has supported plans to reopen land communications but shares Armenia's rejection of the corridor.

Zangezur was part of Azerbaijan, but in the 1920s, the Soviets gave the region to Armenia. After this move, Azerbaijan lost its link with Nakhchivan and some parts of the railway between the two countries were destroyed.

Furthermore, Ankara has made frequent calls for a six-nation platform comprising of Turkey, Russia, Iran, Azerbaijan, Georgia and Armenia for permanent peace, stability and cooperation in the region, saying it would be a win-win initiative for all regional actors in the Caucasus.

Meanwhile, Turkey vowed to stand by Azerbaijan on Sunday.

President Recep Tayyip Erdoğan underlined during the 15th meeting of the Economic Cooperation Organization (ECO) that Azerbaijan regaining its occupied territories opened the doors for permanent stability and peace in the region.

"The projects that Azerbaijan has implemented one after another to increase the prosperity in the region are commendable. These steps will support the normalization efforts in the region. As Turkey, we will continue to stand by Azerbaijan in this process.”