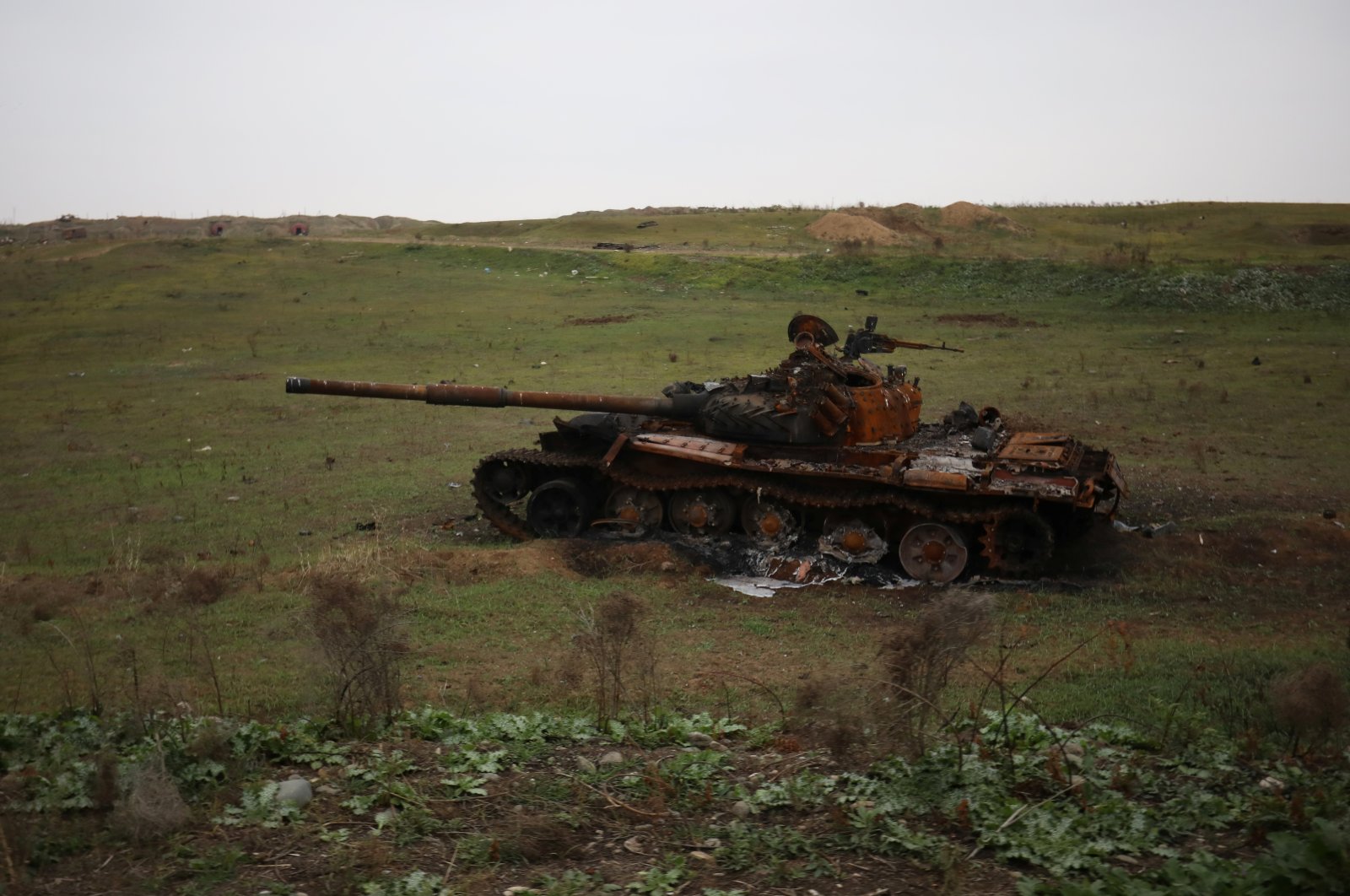 A view shows a destroyed tank in the recently liberated Fuzuli district in the region of Nagorno-Karabakh, Nov. 18, 2020. (Reuters Photo)
by DAILY SABAH WITH AGENCIES Nov 19, 2020 11:12 am
RECOMMENDED

Azerbaijan fought on its soil and restored its territorial integrity in line with international law, Azerbaijani President Ilham Aliyev said on Wednesday.

Releasing a series of tweets regarding the recent clashes between Azerbaijan and Armenia over the Nagorno-Karabakh region, Aliyev said: “Azerbaijan has fought on its soil and restored its territorial integrity. And this has been in line with the U.N. Security Council resolutions and the document initialed by Azerbaijan and the European Union.”

He also added that Azerbaijani refugees and internally displaced persons that have been waiting for this day for 30 years are now celebrating this tremendous military and political victory.

“They are looking forward impatiently to a timetable for their return,” he added.

He reiterated that Armenia will be held accountable in international courts for the crimes it committed on Azerbaijani lands.

Earlier this week, Aliyev and first lady Mehriban Aliyeva, who is also the country's vice president, visited the recently liberated Fuzuli and Jabrayil districts to monitor the area freed after three decades of Armenian occupation.

Aliyev noted that all buildings have been destroyed and looted in the area, adding that the goal of Armenian forces was for Azerbaijanis to never live there again.

"We will live here! We will live forever! We will restore all these buildings, all of them. Notice what is left of them. Has any international organization raised this issue in 30 years? Has any monitoring been carried out here? The whole world will see now what they have done to the city of Jabrayil," he said as quoted by the Anadolu Agency (AA).

"They did not leave behind a single safe building," he said, adding that besides a military unit Armenians built for themselves, all other infrastructure, houses, buildings, schools and public facilities have been destroyed.

"They will be held accountable for this. They will answer in international courts," he said.

On Nov. 10, the two countries signed a Russian-brokered agreement to end the fighting and work toward a comprehensive solution.

A key part of the peace deal includes Armenia's return of Kalbajar, as well as the Aghdam district and the Lachin district by Dec. 1, which have been occupied by Armenians since the devastating 1990s war which claimed 30,000 lives.

While the deal angers most Armenians, Armenia's prime minister presented a 15-point “road map” on the same day aimed at “ensuring democratic stability” in what appeared to be a bid to resolve a political crisis over the deal he signed with Azerbaijan to halt the fighting over the region of Nagorno-Karabakh.

Thousands of people are protesting in Armenia's capital, Yerevan, demanding Prime Minister Nikol Pashinian's ouster. Pashinian brushed off calls to quit, but two of his ministers resigned this week amid the unrest, and Armenian President Armen Sarkissian called for a snap election.

About 7,000 protesters gathered Wednesday in the capital's Freedom Square. Separately, Pashinian made a brief speech to a rally of about 3,000 supporters, most of them dressed in military gear.

“I promise I will not betray the people,” he said according to the Associated Press (AP).

In a Facebook statement presenting his "road map" for “ensuring democratic stability in Armenia,” Pashinian once again said that he considers himself "responsible for the situation."

“I also bear the responsibility for overcoming the situation and ensuring stability and security in the country,” the prime minister said, adding that he was “fully engaged in this work.”

Pashinian's plan calls for resuming the negotiation process over Nagorno-Karabakh under the auspices of the Minsk Group, which was set up by the Organization for Security and Co-operation in Europe (OSCE) in the 1990s to mediate the conflict between Armenia and Azerbaijan over the Nagorno-Karabakh region.

Fresh clashes erupted on Sept. 27, and the Armenian Army continued its attacks on civilians and Azerbaijani forces for 44 days, even violating humanitarian cease-fire agreements.

Baku liberated several cities and nearly 300 of its settlements and villages from the Armenian occupation during the fighting.

Most recently, the Turkish Parliament on Tuesday overwhelmingly approved the deployment of Turkish troops to Azerbaijan for a peacekeeping mission to monitor the cease-fire deal that aims to end the conflict in the Nagorno-Karabakh region.

The mandate will allow Turkish troops to be stationed at a peacekeeping center for one year as part of an accord between Ankara and Moscow to monitor the implementation of the cease-fire, which locked in territorial gains by Azerbaijan. Some 2,000 Russian peacekeeping troops have been also deployed to the region.