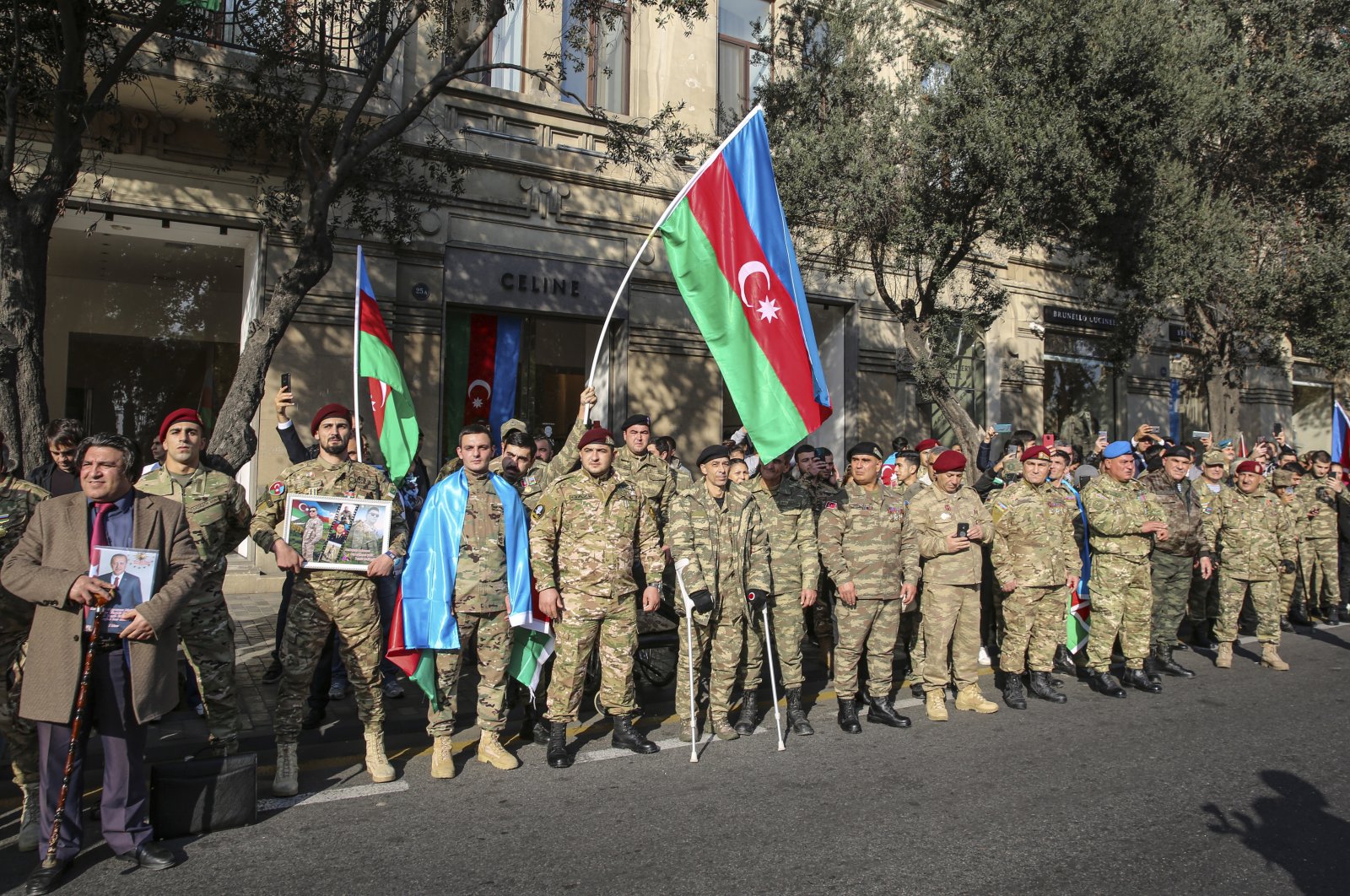 Azerbaijani soldiers attend a parade on the anniversary of the end of the 2020 war over the Nagorno-Karabakh region between Azerbaijan and Armenia, in downtown Baku, Azerbaijan, 08 November 2021. (EPA Photo)
by DAILY SABAH WITH AA Nov 10, 2021 10:35 am
RECOMMENDED

Karapetyan's visit was "deliberately held" ahead of the anniversary of the trilateral agreement signed by Azerbaijan, Russia and Armenia on Nov. 10 last year, the ministry said.

His "unauthorized entry ... into the territory of Azerbaijan, holding meetings with illegal Armenian formations, and expressing views on their combat readiness is a military-political provocation," it added.

"The political and military leadership of Armenia, grossly violating the provisions of the trilateral statement, attempts to destabilize the situation in the region and overshadow the activities of Russian peacekeepers," read the statement.

"Instead of drawing conclusions from the complete defeat in the 44-day war in Karabakh, adapting to the new geopolitical situation in the region, and strengthening peace and security, the military leadership of Armenia tries bad military adventurism."

The ministry said Karapetyan's visit "once again demonstrates that Armenia continues to directly support irregular Armenian military units, aggressive separatism and terrorist acts on the territory of the Republic of Azerbaijan."

It warned that Azerbaijan will take "necessary measures ... to prevent aggressive separatism and terrorist acts" if Armenia fails to cease such actions.

Tens of thousands marched across Azerbaijan's capital on Monday to mark the one-year anniversary of the country's victory in the six-week battle over Nagorno-Karabakh.

“We have restored our dignity,” Aliyev said. “We will live forever as a victorious country and a victorious nation. If any force in Armenia looks askance at us or engages in revanchist tendencies, it will see our fist.”

Armenia should consider the hand extended by President Recep Tayyip Erdoğan and his Azerbaijani counterpart Aliyev for peace as an opportunity to be seized, Turkish Defense Minister Hulusi Akar also said Tuesday.

During the conflict, Azerbaijan liberated several cities and 300 settlements and villages that were occupied by Armenia for almost 30 years. Prior to that, about 20% of Azerbaijan's territory was under illegal occupation.

On Nov. 8, Azerbaijan celebrated Victory Day on the first anniversary of the liberation of Shusha, the pearl of Karabakh, which played a crucial role in the fate of the war, officially labeled as The Patriotic War, leading to the defeat of Armenian forces.

Azerbaijani forces entered Shusha, surrounded by mountainous terrain and located on the top of a rock, with light weapons only and destroyed the Armenian army in a close-range battle.