Turkey calls on Armenia to use opportunity for regional peace 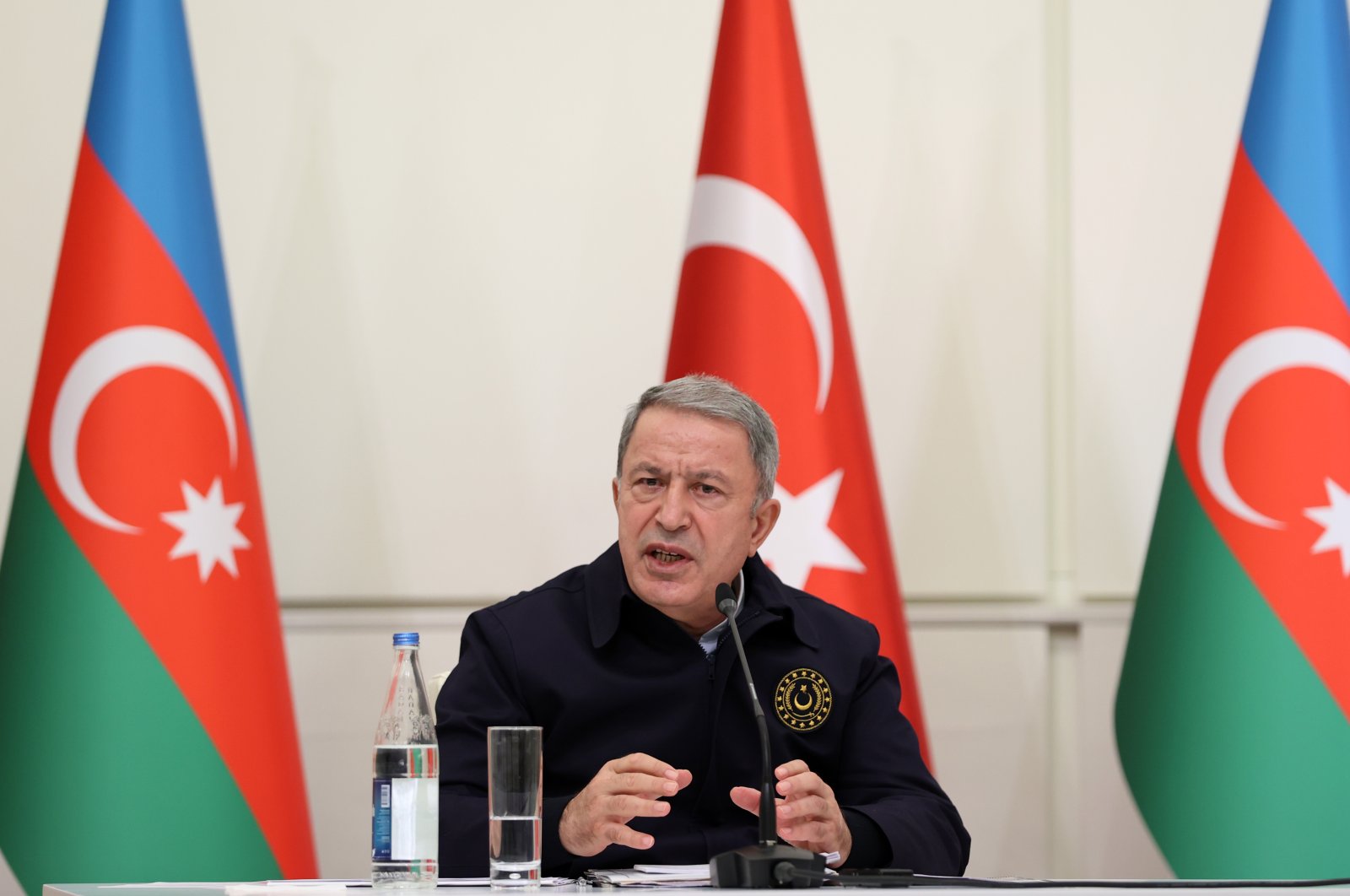 Armenia should consider the hand extended by President Recep Tayyip Erdoğan and his Azerbaijani counterpart Ilham Aliyev for peace as an opportunity to be seized, Defense Minister Hulusi Akar said Tuesday.

Akar addressed Azerbaijani reporters during his visit to Azerbaijan to attend the Victory Day celebrations to mark the country's victory in last year's Karabakh war to liberate the Armenian-occupied territories of the region.

Stating that as a result of the 44-day operation, Azerbaijan liberated the lands under the occupation of Armenia and gained the independence and freedom of its own territory, Akar said: "Now a new struggle has begun, an economic struggle. It is a struggle for the people there to return to their lands and live in peace, tranquility and security. As the Turkish Armed Forces (TSK), we work day and night to eliminate all kinds of threats and dangers, especially handmade explosives and mines, which were treacherously placed there and threaten the lives of innocent people, by working with our Azerbaijani brothers. Thankfully, the lands cleared there are being reintroduced to the economy,"

Reiterating that Erdoğan and Aliyev have made statements about what can be done in terms of the security, rights and interests of the parties, Akar said: "We want Armenia to consider and use the hand of peace extended by the president of Azerbaijan, Mr. Ilham Aliyev, and President Mr. Recep Tayyip Erdoğan, as an opportunity. Therefore, here, Azerbaijan, Armenia, Turkey, Georgia, Russia and Iran, should provide stability by talking together. There are various regions in the world where there are conflicts and troubles. Those who talk and find political solutions in these regions have come to much safer and more prosperous conclusions. This needs to be recognized. Of course, the key factor here is that Armenia understands this. If it understands this and makes the necessary contributions, acts and shows the necessary reactions, very serious progress can be made in terms of both security and welfare."

When asked about the activities of the joint center where Turkish-Russian soldiers are stationed, Akar said: "The duties and boundaries of the joint center are clear. Although there are some different initiatives from time to time, my dear brother, Azerbaijani Defense Minister Gen. Zakir Hasanov, makes the necessary corrections and puts forward ideas on these issues. Every effort is made to make that center work within the framework determined, ensuring the continuity of the cease-fire and bringing stability to the region with the cease-fire. We have demonstrated our seriousness, sincerity and friendship on this issue.

"Not only Russia and Turkey but also Azerbaijan are working diligently in administrative and security duties and in the execution of activities there. As a result of this, we observe with great pleasure that the cease-fire has continued significantly, violations have decreased significantly and we have taken important steps towards stability. The members of the Turkish Armed Forces there fulfill their duties with great love and awareness knowing that they are doing an important duty. Although there are some minor problems, we continue to progress by solving them through negotiations."

Akar also touched on the importance of the Shusha Declaration signed between Turkey and Azerbaijan. Describing the Shusha Declaration as "a documenting the feelings and thoughts they have," Akar said: "It is a document in which both our president, Mr. Recep Tayyip Erdoğan, and the president of Azerbaijan, Mr. Ilham Aliyev, put forward the perspective and vision they see for our countries."

On June 15, Turkey and Azerbaijan signed the Shusha Declaration, a pact that focuses on defense cooperation and establishing new transportation routes. Erdoğan and Aliyev met in the historic city of Shusha, which was liberated last fall from nearly 30 years of Armenian occupation. The declaration affirms joint efforts by the two armies in the face of foreign threats and the restructuring and modernization of their armed forces.

Noting that they continue to work in this context, Akar said: "While we continue to work on restructuring, modernization, training of our personnel and Azerbaijan's heroic personnel, and to maximize the level of preparation for the operation; on the other hand, we continue to meet the needs of the defense industry for equipping of these heroic and devoted personnel. We are working on the procurement of war weapons, tools and equipment. In this context, we continue our work in close cooperation with one fist and one heart."

In response to the statement that "there are some activities aimed at escalating the situation in the region," he said: "There was a just, necessary and internationally legitimate struggle. In this struggle, the land of another country was not occupied in any way, the right of any person, group or nation was not usurped. We have made efforts to save Azerbaijan's own lands from occupation. Therefore, everyone should understand that in the next period, we will not get anywhere with these hostilities. We have to look to the future."

Speaking at the Presidential Complex in the capital Ankara after a Cabinet meeting, Erdoğan marked Azerbaijan's first Victory Day, marking a key day at the end of the illegal Armenian occupation. Those who remained silent on the three-decade occupation of Azerbaijan's Nagorno-Karabakh region are responsible for the tragedies and the bloodshed that took place there, he said.

Tens of thousands marched across Azerbaijan's capital on Monday to mark the one-year anniversary of the country's victory in the six-week battle over Nagorno-Karabakh.

“We have restored our dignity,” Aliyev said. “We will live forever as a victorious country and a victorious nation. If any force in Armenia looks askance at us or engages in revanchist tendencies, it will see our fist.”

As part of Monday's celebrations, demonstrators and military cadets carried a huge 440-meter (1,444-foot) national flag across the capital of Baku.

During the conflict, Azerbaijan liberated several cities and 300 settlements and villages that were occupied by Armenia for almost 30 years. Prior to that, about 20% of Azerbaijan's territory was under illegal occupation.

On Nov. 8, Azerbaijan celebrated Victory Day on the first anniversary of the liberation of Shusha, the pearl of Karabakh, which played a crucial role in the fate of the Patriotic War, leading to the defeat of Armenian forces.

Azerbaijani forces entered Shusha, surrounded by a mountainous terrain and located on the top of a rock, with light weapons only and destroyed the Armenian army in a close-range battle.