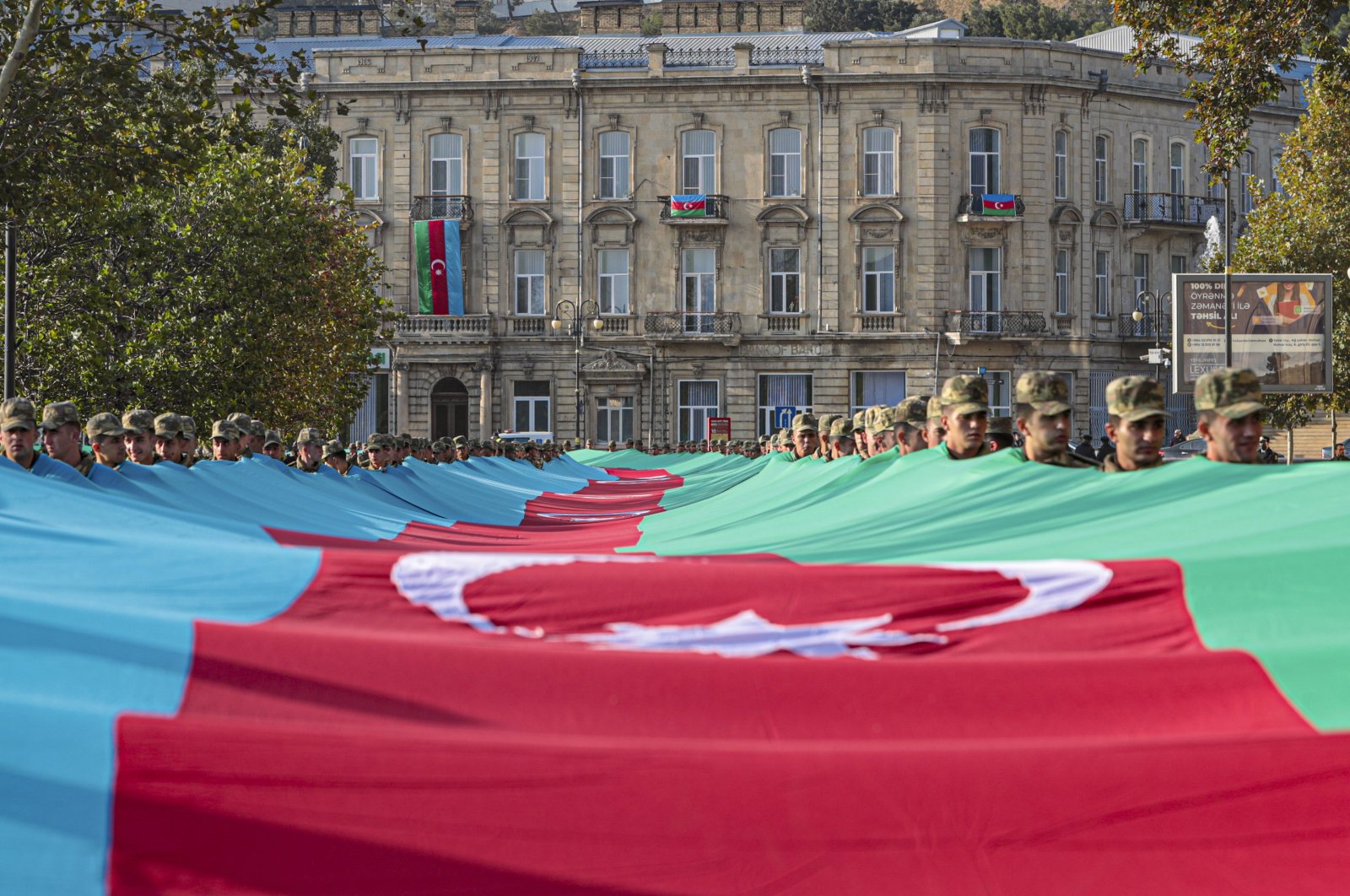 Azerbaijani soldiers carry a large-scale national flag on the anniversary of the end of the 2020 war over the Nagorno-Karabakh region between Azerbaijan and Armenia, in Baku, Azerbaijan, Nov. 8, 2021. (EPA Photo)
by DAILY SABAH WITH AA Nov 09, 2021 10:42 am
RECOMMENDED

Azerbaijan's ambassador to Turkey on Monday praised Ankara's support to Baku during its battle to liberate the occupied territories of Karabakh last year.

A panel in Turkey's capital Ankara on Monday marked the first anniversary of the liberation of Azerbaijani territories occupied by Armenia. Titled "The Process from the Shusha Victory to the Shusha Declaration and the Geopolitical Effects of the Victory," it was co-organized by the Turkish-Azerbaijani Friendship Cooperation and Solidarity Foundation (TADIV), the Turkish Radio and Television Corporation (TRT), TÜRKSOY, the Azerbaijani Embassy in Turkey and the State Committee on Work with the Diaspora of the Republic of Azerbaijan at Azerbaijan House in Ankara.

On June 15, Turkey and Azerbaijan signed the Shusha Declaration, a pact that focuses on defense cooperation and establishing new transportation routes.

The declaration affirms joint efforts by the two armies in the face of foreign threats and the restructuring and modernization of their armed forces.

In his opening speech, Azerbaijani Ambassador to Turkey Rashad Mammadov said that this week the Turkish people are celebrating Azerbaijan's victory as they were praying for this for the past 30 years with their Azerbaijani brothers and sisters.

"As our hearts beat together during the war, we are together in the victory as well," he said.

"We were not alone in this war. Turkey was with us. It wasn't necessary for the Turkish army to come and fight with us. Azerbaijan modernized its army in the past three decades modeling Turkey. We needed moral support, and we got that from our Turkish brothers and sisters," said Mammadov.

Mammadov said that during the 44-day war, President Erdoğan and Foreign Minister Mevlüt Çavuşoğlu spoke about Azerbaijan on every platform, adding it is important not to forget such a thing.

"This victory is a victory for Turkey as well as for Azerbaijan. This (Azerbaijani) flag is also our flag," he said.

Mammadov said there are several countries around the world that share a language, culture and the same bloodline but none of them have the relationship that Turkey and Azerbaijan have.

Speaking at the panel, Turkish lawmaker Zeynep Yıldız said the Shusha Declaration is an example of a strategic partnership with a deep share of emotions as well.

It is a manifestation of deep friendship, cooperation and brotherhood, she added.

Ibrahim Ethem Atnur, a professor at the National Defense University, spoke about the historical background of the declaration and said the victory took lots of work and development.

The Karabakh Victory Concert was also held Monday in the Turkish capital Ankara on the occasion of Azerbaijan's Victory Day, the first anniversary of the liberation of Azerbaijani territories from nearly three decades of occupation by Armenian forces.

A short film was shown describing the main aspects of the 44-day Second Karabakh War, also known as the Patriotic War, in which Azerbaijan liberated some 300 settlements from Armenian occupation.

The concert program included songs performed by the TRT Ankara Radio Polyphonic Choir as well as a number of artists from Turkey, Azerbaijan, Kazakhstan, Turkmenistan and Kyrgyzstan, and a folk dance group.

The national anthems of Turkey and Azerbaijan were also sung by the choir at the beginning of the concert.

During the event, the participants had a chance to sample Azerbaijan's traditional cuisine.

Speaking at the event, professor Aygün Attar, the head of TADIV and a member of the Presidential Security and Foreign Policy Committee, said the celebration of Victory Day in Turkey, which "shares the happiness and sorrow of Azerbaijan," has a special meaning.

Thousands of soldiers died in one of the world's most ferocious battles in the Gallipoli campaign in the Ottoman Empire during World War I. The battle took place between April 25, 1915 and Jan. 9, 1916.

Mammadov speaking at the event noted that Victory Day is being celebrated with hundreds of events in different parts of the world.

"Our Turkish brothers and sisters, who shared the sorrow of the clashes, who remembered us in prayers, are also sharing our happiness today here with us," he said.

"During the 44-day Patriotic War, the Azerbaijani army gave us the joy of victory by liberating our lands from the occupation at the cost of their lives," he said and added that Victory Day is a "very important day" for the Turkic world.

"I wish Allah's mercy to all my brothers who were martyred for the sake of the homeland, who enabled us to witness this blessed victory, and wish a fast recovery to our veterans, and I bow before them with respect," said Kaseinov.

Şamil Ayrım, a Turkish lawmaker who chairs the Turkey-Azerbaijan Parliamentary Friendship Group, said the events organized worldwide aim to explain the "just cause of Azerbaijan" on the first anniversary of the victory.

Speaking on the Shusha Declaration, he said they "proved to the world" that Azerbaijan and Turkey's relations are at the "level of alliance" besides the relations of brotherhood and friendship.

Hasan Öymez, deputy general manager of TRT, stressed that as TRT they made all efforts to announce the "just cause" of Azerbaijan to both Turkey and world public opinion from the first day until the last day of the conflict, as well as showing Armenia's attacks on civilians to the whole world.

During the 44-day conflict, Azerbaijan liberated several cities and 300 settlements and villages that were occupied by Armenia for almost 30 years. Prior to that, about 20% of Azerbaijan's territory was under illegal occupation.

On Nov. 8, Azerbaijan celebrated Victory Day on the first anniversary of the liberation of Shusha, the pearl of Karabakh, which played a crucial role in the fate of the Patriotic War, leading to the defeat of Armenian forces.

Azerbaijani forces entered Shusha, surrounded by a mountainous terrain and located on the top of a rock, with light weapons only and destroyed the Armenian army in a close-up battle.

A joint Turkish-Russian center was also established to monitor the postwar truce.