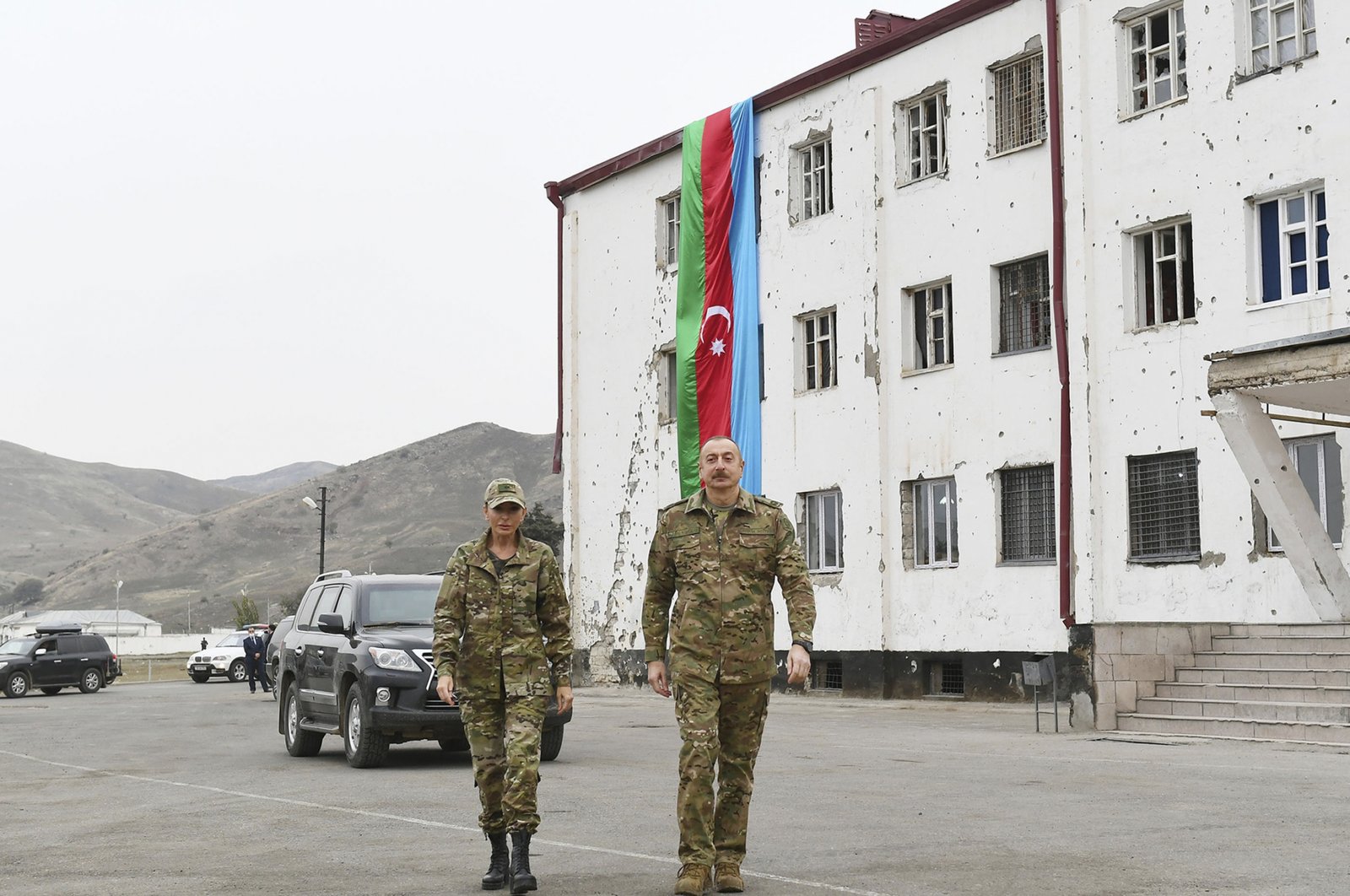 Azerbaijan's president and first lady on Monday visited territories recently liberated from nearly three decades of Armenian occupation, according to the Azerbaijani Presidency.

Aliyeva shared several short video clips on her Instagram page of the president driving a car in the liberated territories, mainly near the border with Iran and the Aras River.

"President Ilham Aliyev and First Lady Mehriban Aliyeva are in the center of Jabrayil after liberation. Everything razed to the ground. Magnitude of Armenia's vandalism is beyond any imagination. President Ilham Aliyev emphasized that all-out reconstruction work will be conducted," he said.

Pointing to homes destroyed by Armenia, President Aliyev said he understands the magnitude of Armenia's ferocity when he sees the destruction.

"Nov. 16 will remain as a significant day in my life," Aliyev said.

"Behind you see the center of Jabrayil. The enemy destroyed the entire infrastructure. They will answer for this in international courts," Aliyev said in a video posted by state media.

The two countries have exchanged 200 bodies of those killed in fighting over the disputed Nagorno-Karabakh region, Russian state media reported Tuesday, citing the Red Cross.

The bodies were exchanged in the presence of Russian peacekeeping troops, the head of the International Committee of the Red Cross, Peter Maurer, was quoted as saying.

A Red Cross spokesperson dealing with the Nagorno-Karabakh conflict did not confirm the number of bodies that were exchanged, but said the process began last week.

More than 1,000 people have been reported killed in the six-week flare-up between Azerbaijan and neighboring Armenia over the Nagorno-Karabakh region.

New clashes erupted on Sept. 27 and the Armenian army continued its attacks on civilian and Azerbaijani forces for 44 days, even violating three humanitarian cease-fire agreements. Azerbaijan liberated several cities and nearly 300 of its settlements and villages from Armenian occupation in the past few weeks.

Following the Russian-brokered peace deal signed between Yerevan and Baku, Armenian residents in the occupied areas had until Nov. 15 to leave the area, but that date was extended by another 10 days on humanitarian grounds.

The motion said the establishment of a “Joint Center” in the Azerbaijani territories to observe the cease-fire was agreed on. Turkey and Russia will jointly take part in this center as per Azerbaijan’s request.

The deployment “will be for the benefit and welfare of the people in the region,” the motion said, adding the move will also be in Turkey’s national interests. It followed two days of talks in the capital Ankara with Russian officials about how the two regional powers intend to jointly implement a Russian-brokered cease-fire signed last week.

Turkey and Russia continue to work on the Nagorno-Karabakh peace agreement, Defense Minister Hulusi Akar said in a meeting with ministry officials and commanders on Tuesday, ahead of the approval for the deployment of the troops. Akar spoke at the videoconference meeting attended by deputy defense ministers Yunus Emre Karaosmanoğlu and Alparslan Kavaklıoğlu, Chief of General Staff Gen. Yaşar Güler and commanders-in-chief of the Turkish military.

Referring to the recently signed peace deal, Akar said the framework needs properly defined terms. Akar also criticized Armenians for destroying homes and forests as they leave the occupied lands to allow Azerbaijani owners to return after about three decades.Turkey, which threw its weight behind its ally Azerbaijan in the conflict, has been engaged in talks with Russia for a role in monitoring the cease-fire that ended six weeks of intense fighting between Azerbaijan and Armenia over the Nagorno-Karabakh region.

The Russian-brokered agreement states that a “peacekeeping center is being deployed to control the cease-fire” but does not specify its formal role.