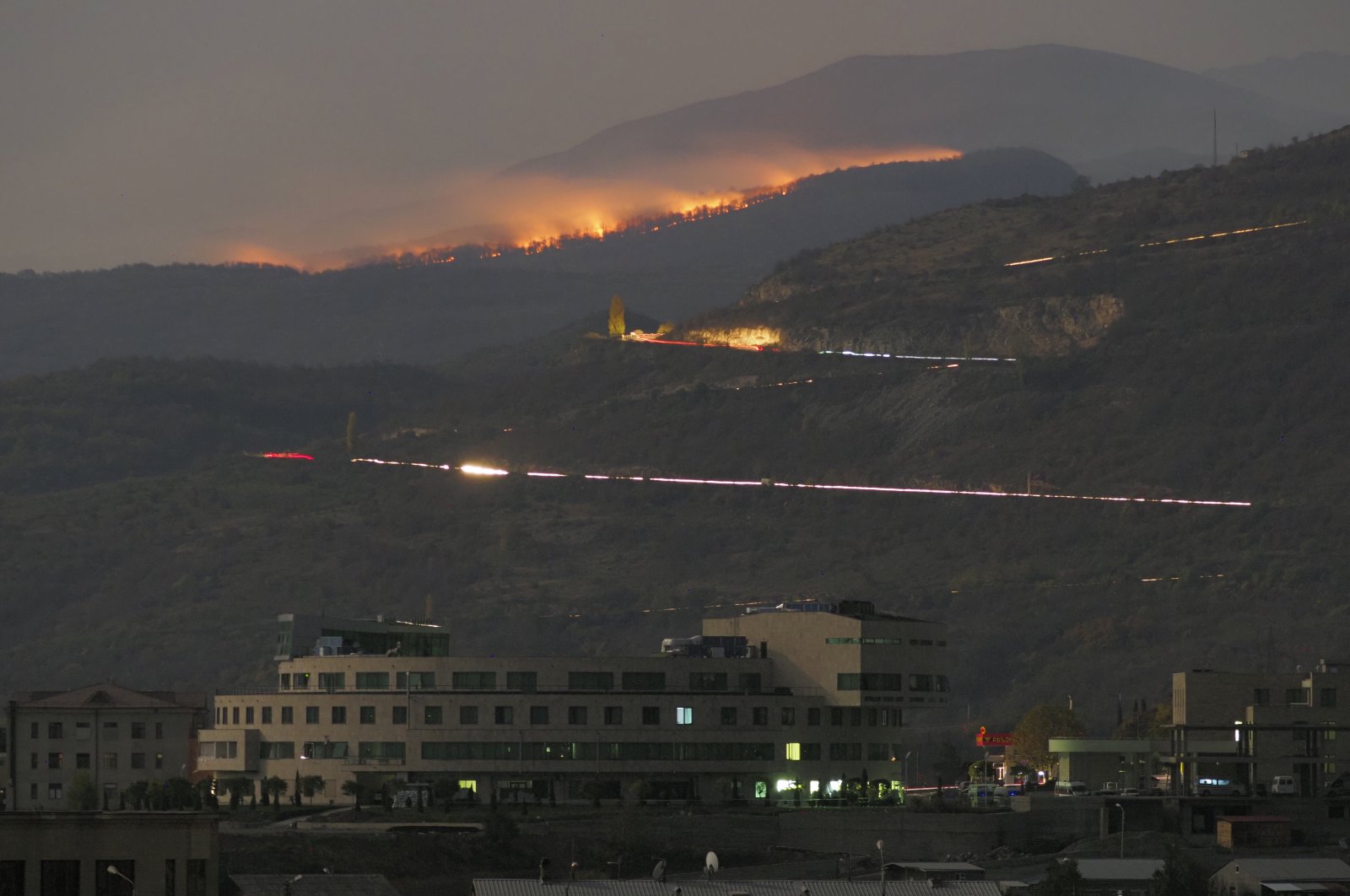 Forest burns in the mountains during a military conflict outside Stepanakert (Khankendi), the Armenian-occupied region of Nagorno-Karabakh, Oct. 30, 2020. (AP Photo)
by Daily Sabah with AFP Oct 15, 2021 11:38 am
RECOMMENDED

Armenian forces killed an Azerbaijani soldier on Thursday, officials in Baku said, in the latest incident between the Caucasus's archenemies since their war last year over the Armenian-occupied Nagorno-Karabakh region.

Azerbaijan's Defense Ministry said in a statement one of its soldiers was killed Thursday evening by "sniper fire from illegal Armenian forces in Azerbaijani territory."

The statement said the Armenian troops were located in territory temporarily under the control of Russian peacekeepers, and that it had called on a joint Russian-Turkish monitoring mission to investigate.

That observer mission, based in Azerbaijan, was tasked last year with overseeing a Moscow-brokered cease-fire that brought to an end six weeks of fighting in November between the ex-Soviet countries.

News of the incident came as Armenia and Azerbaijan's foreign ministers were holding talks with Russia in Belarus on Thursday aimed at mending ties.

Azerbaijan is ready to normalize its relations with Armenia under the scope of international law principles, sovereignty and territorial integrity, Foreign Minister Jeyhun Bayramov said Thursday.

“Azerbaijan is ready to normalize relations with Armenia in line with international law, especially sovereignty, territorial integrity, despite all difficulties,” Bayramov said, speaking at the Commonwealth of Independent States (CIS) Council of Foreign Ministers in Minsk.

He noted that Azerbaijan was able to ensure its territorial integrity after three decades by liberating Nagorno-Karabakh from Armenian occupation, as he highlighted that Armenia has destroyed Azerbaijan’s cultural, historical and religious heritage.

Bayramov met with Russian Foreign Minister Sergey Lavrov on the sidelines of the meeting and discussed bilateral relations, as well as the implementation of the cease-fire declaration.

On the other hand, both Azerbaijan and Armenia have now taken their conflict to the International Court of Justice in The Hague.

The case is to be heard next week. It is not yet known when the court will rule.

Prisoners of war have been tortured and executed and bodies of killed soldiers have been desecrated. Prisoners of war were not released despite international obligations, and cultural and religious sites were destroyed, the rights representatives said.

The background to the legal dispute is the war over the Nagorno-Karabakh region, which had been occupied for decades.

Azerbaijan had finally recaptured large parts of the territory lost in the early 1990s with the help of Turkey, with which it shares cultural and religious links. Armenia meanwhile sees Russia as its protecting power for similar reasons.