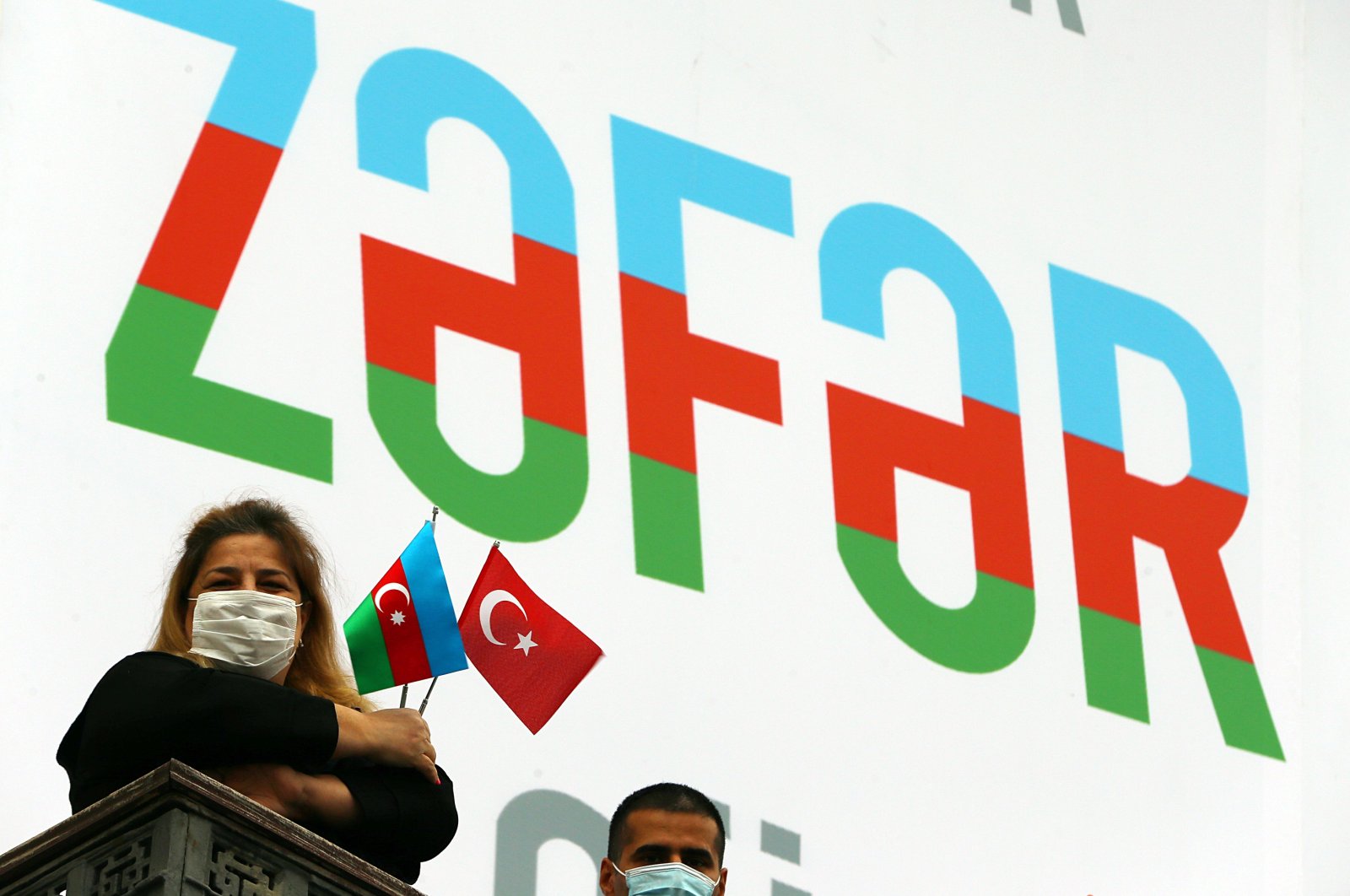 Citizens holding Azerbaijani and Turkish flags stand in front of a poster that reads "Zafar" ("Victory") amid preparations for the victory parade in the capital Baku, Azerbaijan, Dec. 8, 2020. (AA Photo)
by daily sabah Dec 08, 2020 4:11 pm
RECOMMENDED

The Azerbaijani people are looking forward to Turkish President Recep Tayyip Erdoğan’s attendance at the upcoming military victory parade to celebrate the liberation of Nagorno-Karabakh from three decades of Armenian occupation.

Erdoğan will travel to Baku Wednesday for an official two-day visit. He is expected to attend the victory parade on Dec. 10, visit the grave of former President Haydar Aliyev and pay his respects at the martyrs’ cemetery in Baku.

Erdoğan will also hold a meeting with President Ilham Aliyev to discuss the latest situation in Nagorno-Karabakh, the Turkish-Russian agreement for an observation center to monitor the cease-fire, bilateral ties, economic relations and cooperation in the energy and defense sectors.

According to Anadolu Agency (AA), Azerbaijanis see Erdoğan’s participation as a clear display of the fraternity and solidarity between the two countries.

The streets of Baku have been adorned with Turkish and Azerbaijani flags to celebrate the victory, while other preparations are underway for the parade.

Azerbaijani citizen Abulfet Guliyev told AA that he is proud of Erdoğan and that his visit would show the whole world that Turks support each other.

“We are proud of Erdoğan. His supporting actions are priceless,” he said.

Another Baku resident, Sevinç Jaferova, highlighted that Turkey has politically and militarily supported Azerbaijan, and they are grateful for the support.

“Erdoğan is more than welcome. The Turkish army should also come to Karabakh so things can recover faster,” Nermine Müslümova said.

Other Azerbaijani citizens also expressed their appreciation of Turkish support, as they hailed the brotherhood between the two countries.

Meanwhile, Akif Aşırlı, editor-in-chief of Azerbaijan's Şark daily, said Turkey has contributed to the Azerbaijani victory in Nagorno-Karabakh by always standing beside Baku in its efforts to liberate occupied territories.

“Erdoğan will visit his own homeland. His visit is a feast for Azerbaijan,” he said.

The editor-in-chief of Azerbaijan's Turkistan daily also said Erdoğan’s and the Turkish government’s presence in the celebrations is a “source of pride.”

About 20% of Azerbaijan's territory had been under illegal Armenian occupation for nearly three decades. In the most recent conflict that began on Sept. 27, Azerbaijan retook much of the land in and around the Nagorno-Karabakh enclave that it lost in a 1991-1994 war that killed an estimated 30,000 people and forced many more from their homes.

Aliyev had expressed multiple times during the most recent conflict that if there was to be peace, Baku wanted to see Ankara at the negotiating table as well. Following the Nov. 10 signing of a Russia-brokered agreement to end the fighting and work toward a comprehensive resolution, Turkey agreed with Russia that its troops would also monitor the cease-fire. On Tuesday, Ankara and Moscow signed an agreement to establish a joint observation center in Nagorno-Karabakh as soon as possible.