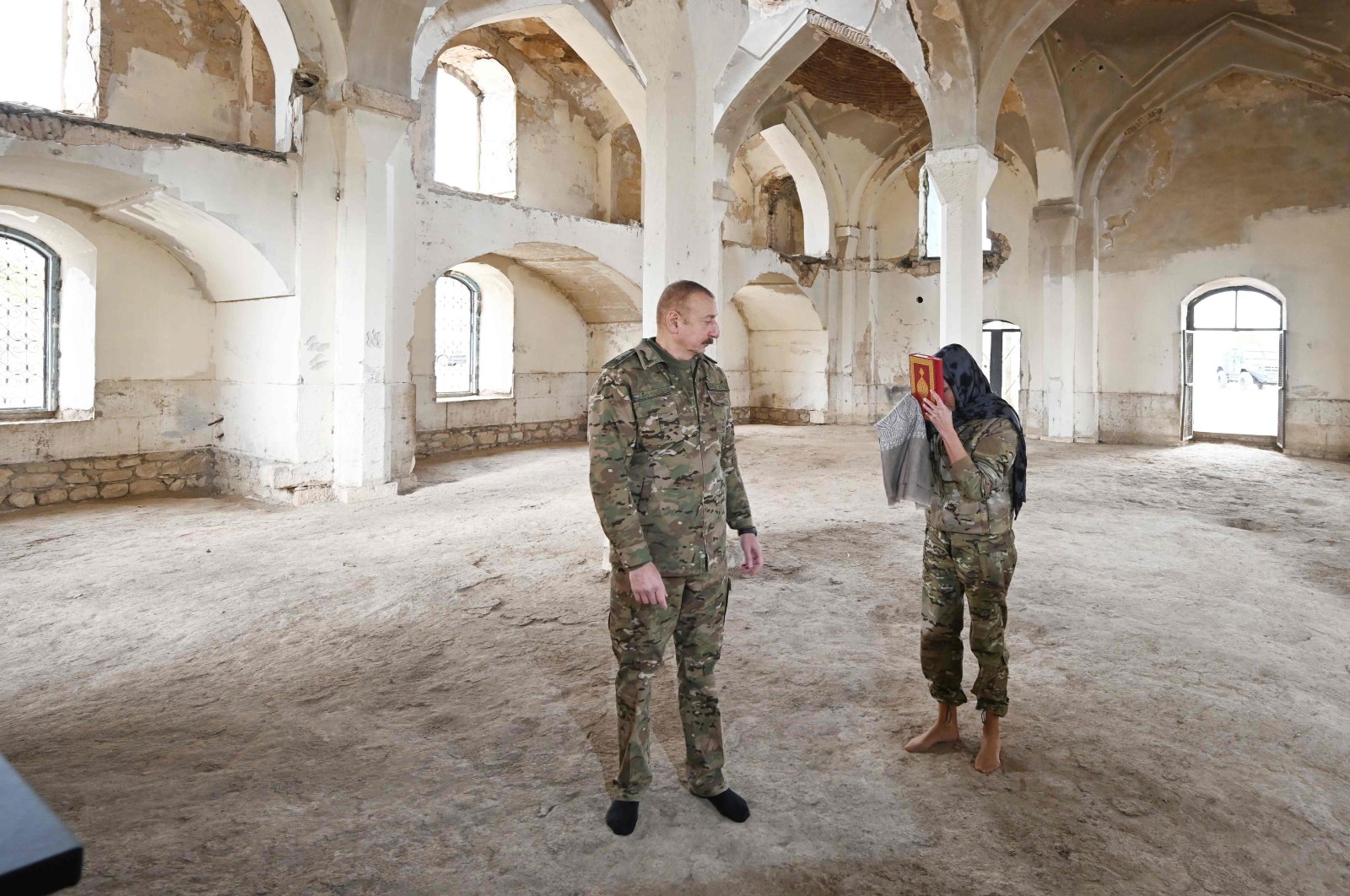 Azerbaijan's leader on Monday criticized the leaders of some Western countries who "remained silent" after Armenian forces destroyed Azerbaijani cultural and religious monuments in the occupied territories.

President Ilham Aliyev visited territories recently liberated from Armenian occupation and addressed the nation in front of Aghdam Mosque in Nagorno-Karabakh. He said after the end of the war with Armenia, some "leaders from Western circles" have been raising the question of what will happen to Christian temples in the liberated lands under the control of Azerbaijan.

"They express these concerns both during conversations with me and in their official statements. No one should worry, especially the leaders of Western countries that ignite Islamophobic sentiments, those who have turned a blind eye to the insults on Islam and even justified those who are insulting it. They have no right to talk about it," Aliyev said.

He stressed that all the temples in the territory of Azerbaijan are "historical assets" of the country.

"Who can criticize us? Those who shut down mosques? Can those throwing the heads of killed pigs into Muslim mosques teach us a lesson and express concern? They do not need to express any concerns. All our historical sites are protected by the state."

Islamophobic cases of insulting Muslim foundations, mosques and places of worship have repeatedly taken place in certain European countries over the years.

"The savage enemy kept cows and pigs in this mosque. These pictures are available on the internet. They kept pigs in the liberated Zangilan mosque, in the Jabrayil mosque," Aliyev said.

He reiterated his country's close partnership with UNESCO but stressed that those willing to come and visit the Christian temples should come to Azerbaijani liberated territories and see what "the wild Armenians" have done there.

Aliyev highlighted that a few years ago, the ambassadors of Minsk Group co-chair countries visited Aghdam Mosque and conducted fact-finding missions twice, adding they informed him about their visit.

"Why didn't they raise this issue? Why didn't certain Western leaders express their concern? Does this mean that Muslim mosques can be insulted, cows and pigs can be kept and destroyed? If so, let them say so, let them deal with the problems in their countries and not interfere in our work. Let no one interfere in our work. We have come here ourselves. We have come here in spite of the efforts of all those countries. We have come in spite of all the provocations. We have shed blood and we are standing on our land. Let everyone mind their own business."

In his speech, Aliyev also thanked the Turkish nation and leader for moral support during the clashes with Armenia.

"It was the Republic of Turkey that supported us morally and politically for 44 days. My brother President Recep Tayyip Erdoğan and the leaders of several other Muslim and non-Muslim countries. We have achieved this victory through unity, determination, resolve and strength," he said.

Armenian forces left Aghdam on Nov. 20, in line with the latest Russia-brokered agreement signed between Baku and Yerevan. Along with Armenian forces, the Armenian population who settled in the region during the occupation also left.

New clashes erupted on Sept. 27 and the Armenian Army continued its attacks on civilians and Azerbaijani forces and violating humanitarian cease-fire agreements for 44 days.

During his visit to the city of Aghdam, which was liberated from Armenian occupation after 27 years, Aliyev and first lady Mehriban Aliyeva visited Aghdam Mosque, which was savagely destroyed during the nearly three-decade-long occupation. A religious symbol of the city with its two minarets, it became a place of refuge for the survivors of the Khojaly genocide in 1992.

On Feb. 26, 1992, during a two-hour Armenian offensive, 613 Azerbaijanis were killed, including 106 women, 63 children and 70 elderly people, and 487 others were critically injured, according to Azerbaijani statistics.

The first couple entered the mosque building barefoot with no carpets, inspected the religious monument and offered prayers inside.

Aliyev presented a Holy Quran he brought from Mecca to the mosque.

"Today, in front of the mosque destroyed by vandals, I am saying that I am a happy man. I thank God again for hearing my prayers and giving me this strength.

"I am happy to have visited Mecca four times, once with my late father (Heydar Aliyev) and three times as president. I am happy that I prayed with my family inside the Holy Kaaba. I have the same feelings in my heart as everyone else. My first prayer was for the liberation of our lands from occupation. I asked God to give me the strength to liberate our lands from the occupiers, to give us this happiness and to return to the land of our ancestors," he added.