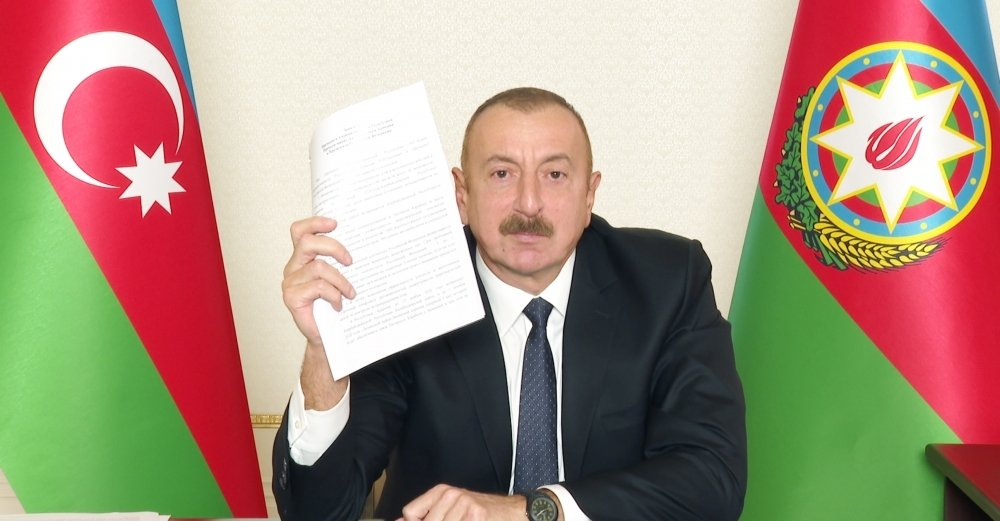 Azerbaijani President Ilham Aliyev hailed the Nagorno-Karabakh peace deal as a victory for his country, as he said Baku's military success has enabled it to gain the upper hand to end the three-decadelong occupation of its territory.

"Our country has put an end to the Nagorno-Karabakh dispute and I believe the agreement will mark the beginning of a new era," Aliyev said in an address to the nation.

He noted that the agreement was signed via videoconference, but the Armenian Prime Minister Nikol Pashinian refrained from signing it during the ceremony.

"An iron hand forced him to sign this document," Aliyev said and added: "This is essentially a capitulation."

"This is why it was signed by myself and Russian President Vladimir Putin," Aliyev said, adding that Pashinian would sign the deal "in a place away from cameras and in a cowardly manner."

Calling the deal "historic," Aliyev said it ends the decadeslong Armenian occupation in the Azerbaijani territory and is a "glorious victory" for the Azerbaijani people.

Aliyev congratulated the Azerbaijani people for their victory, as he said the deal will pave way for many displaced Azerbaijanis to return to their homes after years of conflict.

"They have told me that they wish to return to their homelands," he said, adding that they can now safely do so.

"Azerbaijan is ensuring its territorial integrity again. What could be greater happiness for a nation?" Aliyev said, adding that Azerbaijan's military success has enabled it to achieve the political victory in Nagorno-Karabakh.

The Azerbaijani president continued by saying that the Azerbaijani people will live in their lands forever and nobody will be able to drive them out of their homes from now on.