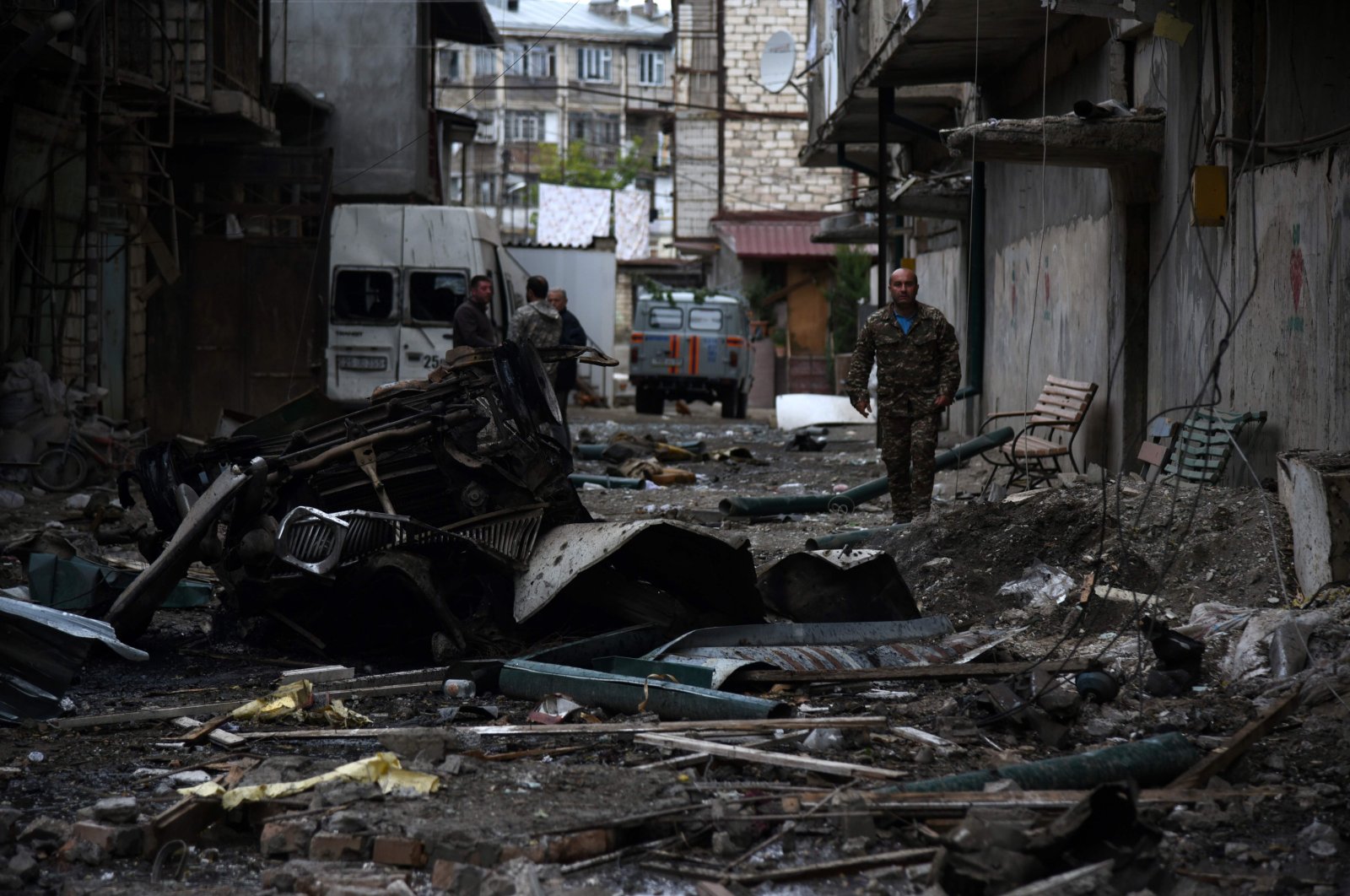 A view shows the aftermath of recent shelling during the ongoing fighting between Armenia and Azerbaijan over the occupied Nagorno-Karabakh region, Oct. 4, 2020. (AFP)
by DAILY SABAH WITH AA Oct 05, 2020 12:59 pm
RECOMMENDED

"Iran is on the transition route to Armenia. We are committed to our pledge that this route will only be used for the transition of the humanitarian products that will be delivered to Armenian people and authorities within the scope of good, neighborly ties. The transition of military vehicles is not allowed in any circumstances," he said, responding to a question of an Anadolu Agency (AA) reporter.

Khatibzadeh further underlined that the road will not be used for any purposes other than humanitarian efforts since it would not be suitable for Iran's "principal policy."

Calling on Armenia to put an end to its occupation in Nagorno-Karabakh, the spokesperson said that Iran demands a sustainable solution to the crisis, not a temporary one.

"A sustainable solution to this decades-long problem depends on respecting Azerbaijan's territorial integrity and withdrawing from the occupation," he said, adding that political negotiations should also start as soon as possible.

Khatibzadeh also signaled that Iran was preparing a project for a possible sustainable solution to the crisis.

"We all should escalate efforts to put an end to this fire and prevent further civilians from burning in this fire," he added.

Last Thursday, ethnic Azerbaijanis, who constitute a large portion of the population in northwestern Iranian cities like Ardabil, Tabriz and Urmia, poured onto the streets in support of Baku.

The protesting groups demanded Iranian authorities close the country’s border with Armenia and the Norduz border gate, through which military equipment has reportedly been transferred to Armenia.

Earlier Wednesday, Iranian authorities arrested at least 11 pro-Azerbaijan protesters, according to the Iranian Human Rights Activists News Agency. It said police forces used tear gas to disperse activists, who had gathered at a park in Ardabil in solidarity with Azerbaijan in the wake of Armenian attacks.

Azerbaijani Turks constitute at least a third of Iran’s 81.8 million population, according to different estimates. It was approximately 30 million according to Unrepresented Nations and Peoples Organization's (UNPO) 2017 data. They constitute the majority in northwestern provinces of Ardabil, East Azerbaijan, West Azerbaijan – bordering Azerbaijan – and Zanjan, in addition to a significant population in adjacent provinces and the capital, Tehran.