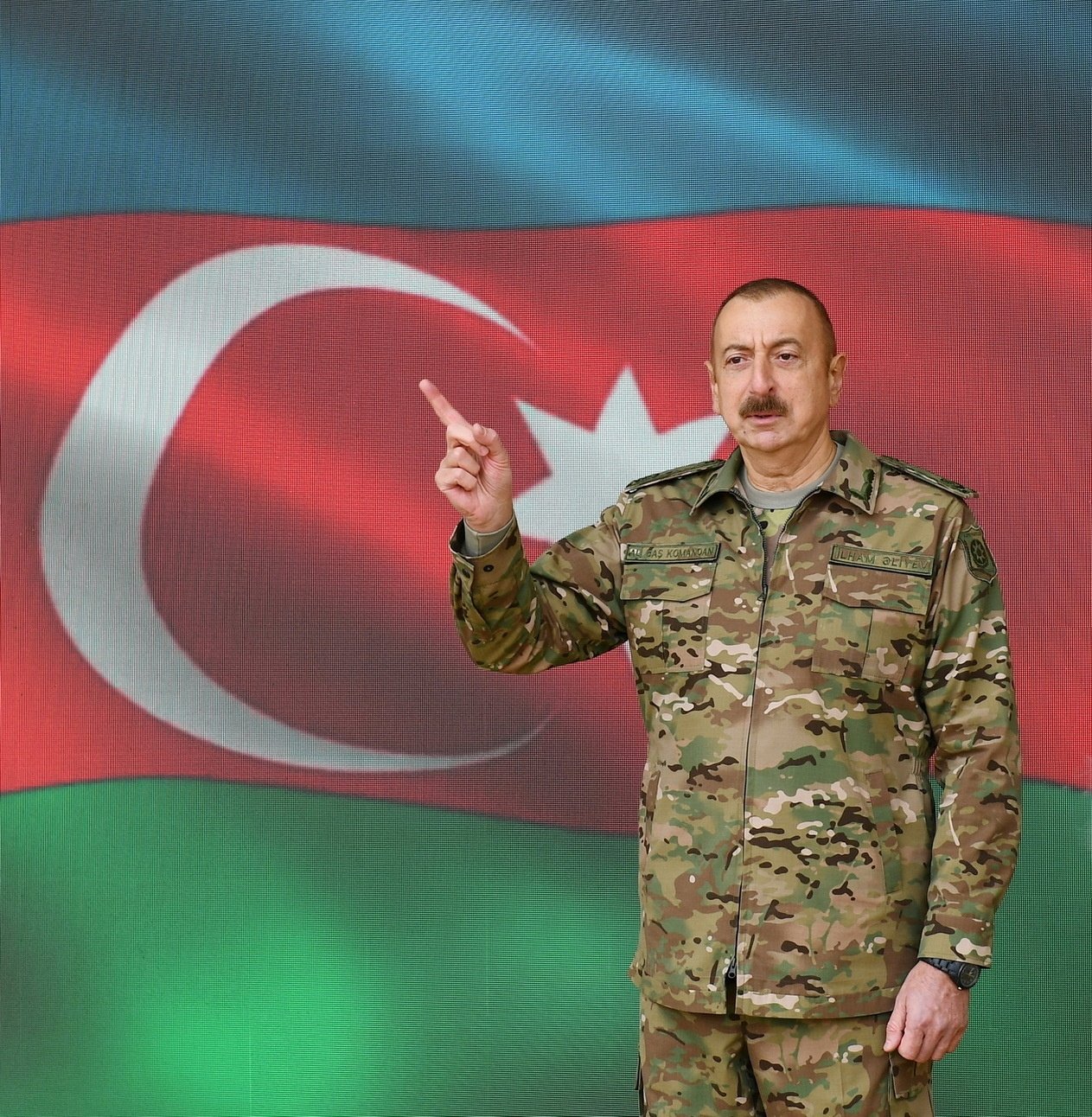 Azerbaijan's President Ilham Aliyev gestures as he addresses the nation during his visit to the Alley of Martyrs in Baku, Azerbaijan on Nov. 8, 2020. (Reuters Photo)
by DAILY SABAH Nov 09, 2020 11:35 am
RECOMMENDED

Azerbaijani President Ilham Aliyev said he will invite Turkish troops to Azerbaijan if any country threatens Baku, amid the ongoing conflict in the Armenian-occupied Nagorno-Karabakh region.

“We have urged all countries, including our neighbors and non-neighbors, to stay away from this conflict,” Aliyev said, adding that Azerbaijan is fighting against Armenia on internationally recognized Azerbaijani lands.

Aliyev said he does not think Turkish assistance will be necessary, but there is an agreement with Turkey, which was signed years ago, foreseeing military assistance in times of aggression.

“If Azerbaijan faces aggression and needs military support from the Turkish army, we can use this option and invite them over,” Aliyev was quoted as saying.

Aliyev's statement came a day after the Azerbaijani military liberated the strategic city of Shusha after 28 years of occupation by Armenia.

Shusha holds critical importance in the overall liberation of the occupied Nagorno-Karabakh region.

The town has a significant military value since it is located on strategic heights about 10 kilometers (6 miles) south of the region’s capital over Khankendi (Stepanakert) and on the road linking the city with Armenian territory.

About 20% of Azerbaijan's territory – including Nagorno-Karabakh and seven adjacent regions – have been under Armenian occupation for nearly three decades.

While world powers have called for a sustainable cease-fire, Turkey has supported Baku's right to self-defense and demanded the withdrawal of Armenia's occupying forces.

Multiple U.N. resolutions also call for the unconditional withdrawal of the invading forces.

Azerbaijan and Armenia have been locked in a bitter conflict over Nagorno-Karabakh since Armenian separatists backed by Yerevan seized control of the mountainous province in a 1990s war that left 30,000 people dead.

Nagorno-Karabakh's self-declared independence has not been recognized internationally, even by Armenia, and it remains a part of Azerbaijan under international law.

It has been the heaviest fighting since a 1994 cease-fire erupted on Sept. 27 and has persisted despite intense diplomatic efforts to bring it to a halt.

The two sides have three times agreed to for a cease-fire – the latest in a U.S.-brokered deal over the weekend, but the truces have all quickly fallen apart.

The fighting has intensified in recent days with renewed shelling and rocket attacks on civilian areas.