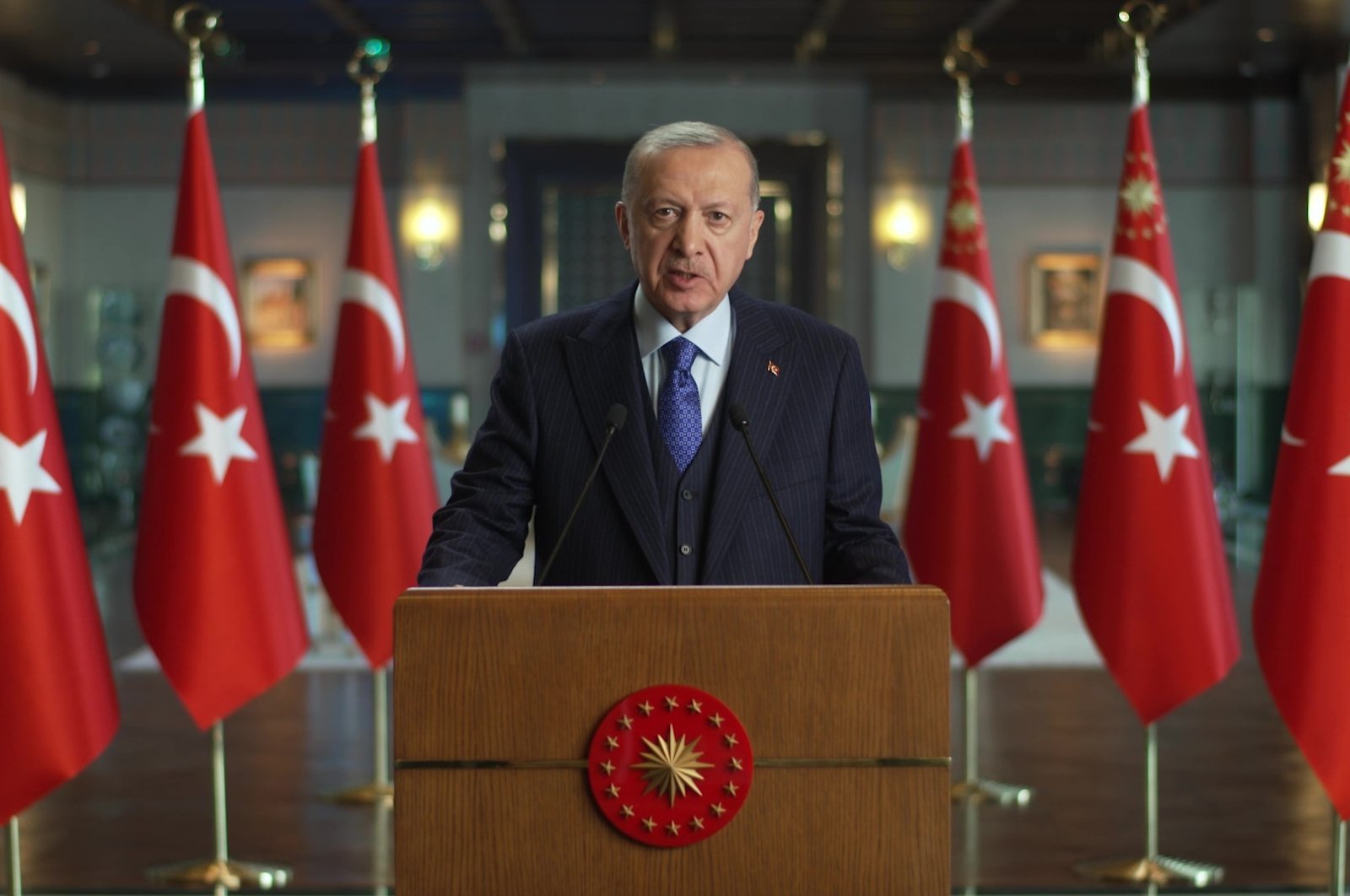 President Recep Tayyip Erdoğan gave the opening speech of the 5th TRT World Forum, which will be held on Oct. 19-20 with the theme “Power and Paradox: Understanding Grand Strategy in the 21st Century” as the guest of honor. Erdoğan, who addressed the participants via video call, started his speech with the words: “I pray to Allah that the TRT World Forum 2021 will lead to auspicious results for our world, region and country. I sincerely congratulate the TRT administration, as well as the institutions and organizations who made a contribution to this remarkable event.”

'Institutions have failed in world peace'

Erdoğan stated that the influence of the COVID-19 pandemic, which has left its mark on the past two years, has waned but the aftershocks are still being felt and underlined that it will take time to get back to normal life after such a massive crisis. Erdoğan said, “What happened throughout this period revealed that nothing in the world will ever be the same again,” and continued as:

“The contradictions and paradoxes of the global system have been brought to the surface as never before. It has been seen how vulnerable the health and social assistance infrastructures of states are, particularly those at the top of the world's welfare rankings. In the face of this crisis, which threatens the future of all humanity, the institutions in charge of ensuring peace and justice in the world have failed once again. While underdeveloped countries and poor segments of society have been left to their fate, and protectionism in trade has intensified, supply chains have been disrupted. With the economic difficulties, hate crimes in Western countries have reached a terrifying level.”

Erdoğan, who underlined that the concept of the social state has been gravely harmed due to pandemics, stated that income disparities, animosity toward Islam and anti-immigrant sentiments have surged once again.

“Rather than confronting the animosity toward Islam, which has penetrated society like cancer, European politicians are calculating how to exploit it, turn it into political rent and win votes. As a politician who has been drawing attention to these threats for many years, our concerns have grown further as a result of what we have witnessed. To be honest, we are disappointed to see that a historic opportunity to ensure global peace and justice has been squandered. Unfortunately, we were unable to properly capitalize on the coronavirus pandemic in terms of cooperation and solidarity, although it reminded us once again that we are one big family. It would be a simplistic and flawed approach to attribute up to 5 million fatalities globally to the virus or poor health care. The existing system, which defends the powerful over the vulnerable, supports exploitation over-sharing and encourages greed, selfishness and avarice over contentment, is the most crucial reason for the emergence of this picture.”

"The need for reform in the United Nations and other international organizations can no longer be disregarded,” he said.

Erdoğan emphasized that the system after the world wars has failed to produce justice and stability for a long time and continued:

“This system, whose foundations were laid following World War I, and solidified after World War II, has failed to produce justice and stability for a long time. It is impossible for this system to continue in its current structure, in which the Islamic world has no say, the demands of Africa, Latin America and South Asia are ignored, and only the interests of the five most powerful countries are taken into account. The need for reform in the United Nations and other international organizations can no longer be disregarded.”

'A fairer world is possible'

Erdoğan, pointing out once again that Turkey has been voicing the need for reform for many years with the motto “the world is bigger than five,” added: “We have recently shared our tangible proposals on this with our nation and the rest of the world, declaring that "a fairer world is possible." Instead of simply criticizing, we have proposed a principled, comprehensive, strategic and applicable model for the United Nations that will ensure equal representation and abolish the veto privilege. During our talks at the 76th session of the United Nations General Assembly, we were especially pleased to learn that our country's efforts had been reciprocated. We are determined to take this struggle, which we are waging on behalf of all oppressed people and victims, to a much higher level. We will continue to support this struggle until a global order is established, which puts people in the center, prioritizes justice and equity, and in which rightfulness is powerful rather than the powerful being right.

Erdoğan concluded his speech by saying: “I believe that the discussions at the TRT World Forum, which will be held under the theme 'Power and Paradox: Understanding Grand Strategy in the 21st Century,' will open up new horizons for us. As I conclude my remarks with these thoughts, I wish the forum success and express my appreciation in advance to everyone who has contributed.”