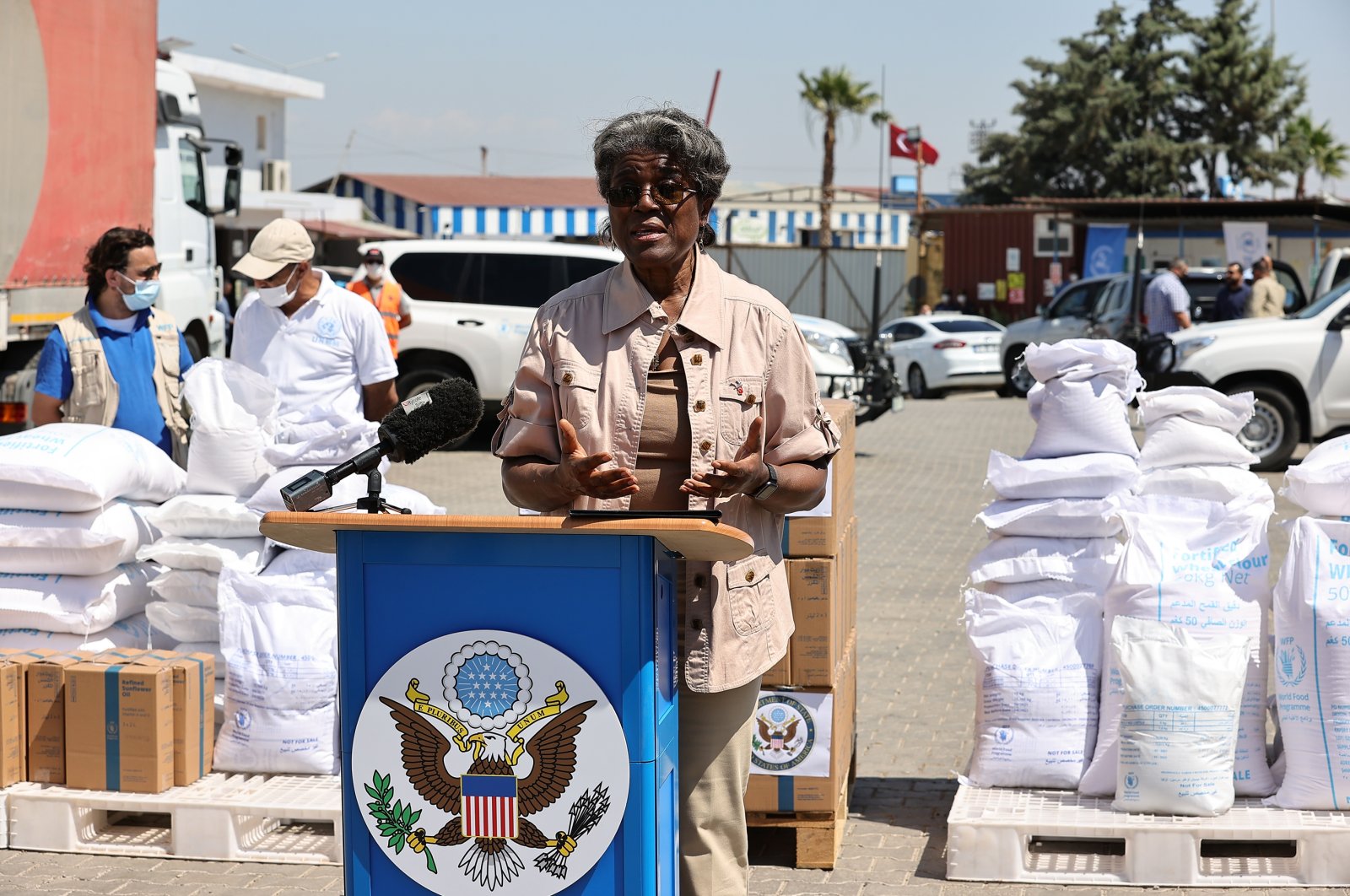 U.S. Ambassador to the U.N. Linda Thomas-Greenfield came together with humanitarian aid workers providing care for Syrians during her official visit to Turkey as she urged the U.N. Security Council to do more

Speaking in Hatay’s Reyhanlı district, Thomas-Greenfield warned of the grave outcomes should the border gate close.

The 15-member Security Council first authorized a cross-border aid operation into Syria in 2014 at four points. Last year, it reduced that access to one crossing point from Turkey to Syria's opposition-held northwest at the insistence of Russia, the Syrian regime's closest ally.

Another showdown is likely over the renewal of the mandate for the operation, which expires on July 10. A resolution to extend council approval needs nine votes in favor and no veto from any of the five permanent members Russia, China, the United States, France and Britain.

Several council members, including the United States, are pushing to expand the cross-border operation and increase the number of cross-border aid access points.

The U.N. envoy came together with Mark Cutts, deputy regional humanitarian coordinator for the Syria crisis and humanitarian aid agency workers. Cutts explained that refugees on the border with Turkey and Iraq have been living in tents for years, unable to meet their basic humanitarian needs.

“15,000 Syrians take part in humanitarian aid efforts and help their own community. I have worked in countries such as Afghanistan, Eritrea, South Sudan but never seen people that are so dedicated to their own society as here,” Cutts said.

Underlining that aid is still not at the expected level, Cutts continued: "The world’s biggest humanitarian aid operation takes place in Syria. But it is still not where it should be. There is a financing crisis.”

He urged Thomas-Greenfield to voice the issue at the U.N. Security Council.

Thomas-Greenfield announced that the U.S. was ready to allocate an additional $200 million (TL 1.73 billion) of financing for Syrians.

Highlighting that more than 13 million Syrians are in need of humanitarian aid due to the conflict in their country, Thomas-Greenfield said that “this number is the total of the populations of Los Angeles, New York and Washington.”

She noted that four out of every five people living in northern Syria are in need of humanitarian aid and said: “This aid is vital for millions of civilians in Idlib.” She voiced regret that the U.N. Security Council closed border gates to Syria. “Cilvegözü is one of the border gates that remains open.”

Most recently, a fragile truce was brokered between Moscow and Ankara in March 2020 in response to months of fighting by the Russia-backed regime. Almost a million people have fled the Bashar Assad regime’s offensive yet the regime still frequently carries out attacks on civilians, hindering most from returning to their homes and forcing them to stay in makeshift camps.

The envoy further stated that the U.S. is in talks with the Security Council, Turkey and Russia to open border gates for humanitarian aid.

On the other side, Thomas-Greenfield stated Wednesday that Turkey is a valued strategic partner and NATO ally.

Kalın highlighted the necessity of supporting Constitutional Committee efforts to achieve a political solution in Syria and ensuring a free and fair atmosphere for elections. He also touched upon the importance of joint cooperation against terrorist groups in the region.

Regarding the issue of migration, Kalın noted that another migration wave would create greater humanitarian crises and instability in the region, especially in Idlib.

Ten years after the Syrian conflict broke out, the situation for refugees and host communities is more difficult than before. Of the country’s pre-war population of 23 million, 13 million Syrians were forced to flee their homes with over 6.7 million of them fleeing across the country’s borders, the U.N. refugee agency's statistics show.