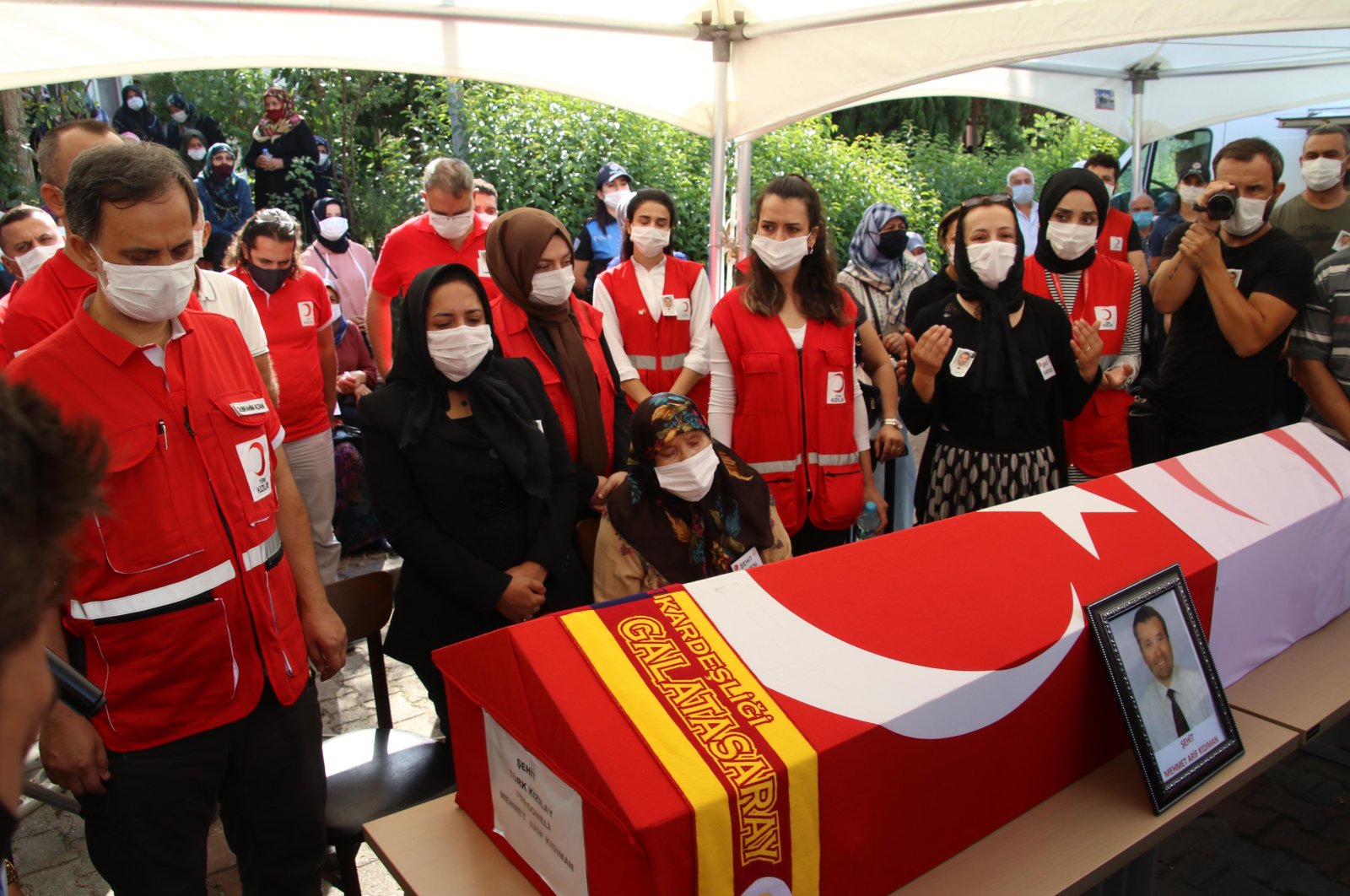 The funeral of the Turkish Red Crescent worker Mehmet Arif Kıdıman took place in his hometown Düzce with the participation of his colleagues, northwestern Turkey, Sept. 15, 2020. (DHA)
by DAILY SABAH WITH AA Sep 15, 2020 11:29 am
RECOMMENDED

Foreign diplomatic missions in Turkey on Monday condemned an armed attack on a Turkish Red Crescent (Kızılay) vehicle in northwestern Syria which killed one aid worker and injured another.

In a statement, the charity group said the vehicle,with three personnel on board, traveling from the border towns of al-Bab, Syria to al-Rai, Turkey, was caught in the crossfire by people wearing masks and camouflage fatigues Monday. The injured staffer was brought to Turkey for treatment.

The U.S. Embassy in Ankara on Twitter condemned the attack, saying: "We extend our sincere condolences to the family of the victim, and wish a full recovery for the wounded. Humanitarian workers are #NotATarget."

The head of the EU Delegation to Turkey also posted a condolence message on Twitter: "Ambassador Meyer-Landrut offers the EU Delegation's heartfelt condolences for the loss of a Turkish Red Crescent humanitarian worker in Syria's Al Bab. Attacks on humanitarian workers are unacceptable and threaten the delivery of urgently needed aid to those in need."

The British Embassy in Ankara also decried the attack, saying on Twitter: "We condemn the attack on the vehicle of the Turkish Red Crescent in Syria. Deliberate targeting of aid workers is a clear violation of International Humanitarian Law. Our condolences to the family and friends of the aid worker who lost his life and we wish immediate recovery to the wounded."

The region where the attack took place lies within the area liberated from the Daesh terrorist group by the Turkish Armed Forces (TSK) and the Free Syrian Army (FSA) during the Operation Euphrates Shield conducted between August 2016 and March 2017. Since then, Turkish government agencies and nongovernmental organizations (NGOs) have conducted extensive efforts in the region to rebuild infrastructure, resume government services and allow the safe return of refugees.

Head of the Turkish Red Crescent Kerem Kınık condemned the attack and reportedly traveled to the province to further inspect the incident.

During a press conference at Gaziantep airport where he landed before moving to Syria, Kınık said that the organization's activities in Syria will continue. "Both to protect civilians in the region and to provide aid to these people, we will continue our struggle," he said, adding that the organization's representatives in Brussels, Geneva and the United Nations are currently engaging in work to involve the international community in the effort.

Later in the day, the name of the employee who was killed was revealed as Mehmet Arif Kıdıman. Turkish flags have been draped along the street where Kıdıman's house is located in northwestern Düzce province of Turkey. His funeral took place in Düzce on Tuesday morning with the participation of his fellow Turkish Red Crescent colleagues.