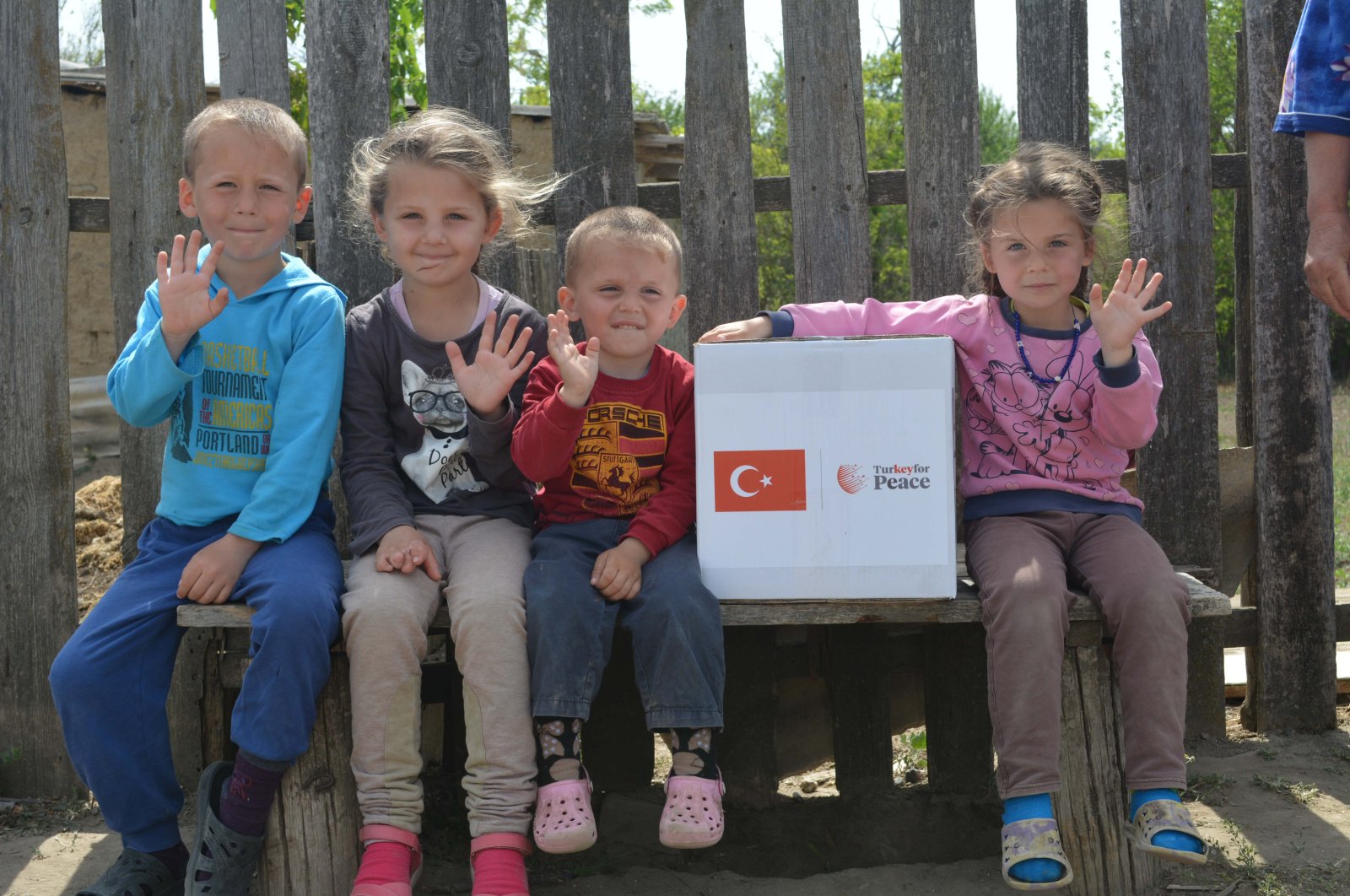 The Turkish Cooperation and Coordination Agency (TIKA) has sent support packages to various regions of Ukraine, May 22, 2020 (AA Photo)
by Dilara Aslan May 26, 2020 1:02 pm
Edited By Dilara Aslan

As the pandemic spreads across the globe, international cooperation and coordination have been of high importance. With that in mind, several ambassadors expressed their intent to expand partnerships with Turkey in various ways

Turkey has become a model example in the fight against the coronavirus pandemic, ambassadors said, underlining that cooperation and coordination with Ankara have been of utmost value during this period. Emphasizing that a global response is what the world needs right now to fight the common threat, ambassadors talking to Daily Sabah praised Turkey’s efforts of sending medical aid and protection equipment to a large number of countries, including those hit hardest by the COVID-19 pandemic.

“During the peak of the pandemic in Italy, Turkey transferred much-needed health equipment to our country. I see such a display of support as another example of the intensity and vitality of our bilateral relations,” Italian Ambassador Massimo Gaiani stated. “This is, in my opinion, the biggest lesson we are learning from this tragedy: The only viable answer to such a global threat is cooperation, both in its bilateral and multilateral dimension.”

The global pandemic that originated in China’s Wuhan in December, has been spreading around the world and has brought everyday life almost to a halt, affecting the economy, politics and social life. The United States and Europe have been especially hit hard while the new epicenter has shifted to Latin America, according to the World Health Organization’s (WHO) statement last week.

“Turkey’s efforts to deal with the COVID-19 pandemic – both domestically as well as internationally – are indeed an example for others to emulate. Turkey has, moreover, been at the forefront of the global efforts to fight the COVID-19 pandemic by sending critical medical aid and personal protection equipment to dozens of countries across the globe. This is indeed an example of Turkey’s global leadership on the issue,” Pakistani Ambassador to Ankara Syrus Sajjad Qazi indicated.

Caught unprepared by the pandemic, countries worldwide struggled to respond to the crisis it created in the health sector and the demand for medical equipment, masks, protective overalls and disinfectants. As many countries were focused on addressing their domestic problems in this process, Turkey has been showing solidarity by sending equipment to the worst-hit countries. Two-thirds of the world has asked Turkey for help while the requests of 81 countries have been met so far.

On the other side, Spain’s Charge d’Affairs Eduardo Ibanez Lopez-Doriga said, “Spain thanks our friend and ally Turkey for its generous aid on medical supply during the outbreak of the coronavirus in Spain, which was of great help to better fight against COVID-19.”

Underlining that Ukraine carefully follows the example of other countries in combating COVID-19, Ukrainian Ambassador Andrii Sybiha said, “I am convinced that the Turkish model in the fight against COVID-19 can become very useful and effective for many foreign countries, including Ukraine. The positive tendencies in lowering numbers of confirmed cases and rising numbers in recoveries prove that the prompt and strict measures are justified. The Turkish people obediently follow the quarantine rules, therefore it became possible to reach desirable results and lower the risks for the population.”

In a recent interview with Daily Sabah, the head of the delegation of the European Union to Turkey, Ambassador Christian Berger similarly said “What we see today in international relations or in relations with our immediate neighbors and candidate countries like Turkey is that we need to stand together.”

He also underlined that closer and better cooperation with Turkey in many aspects could be established, including in the field of research while making sure that trade between Turkey and the European Union keeps flowing and medical equipment can be produced and purchased.

Having taken early measures against the virus and enhanced them after the WHO’s designation of the virus as a pandemic, Turkey has been fairly successful in containing the virus as around 75% of all COVID-19 patients have recovered, according to the Health Ministry’s latest numbers.

“Also in this time of crisis, Turkey has proved to be a true friend and a valuable partner for Italy. We are highly grateful for the solidarity we have been shown time and time again by the Turkish people and institutions. We have received several private donations, and many Turkish health care professionals have declared their readiness to come to Italy to lend a hand to our doctors, battling in the trenches like their Turkish colleagues,” Gaiani added.

Italy, the first country outside of Asia to be overrun by the coronavirus, went into national lockdown on March 10. The country's infection curve has been flattening since then, and the country took a step toward a return to post-virus normality with the resumption of most commercial activities as shops, hair salons, cafes, restaurants and several museums reopened with precautionary measures still in place.

After battling the virus for months, many countries are now shifting to the second phase by gradual normalization procedures and living with the virus by taking the necessary hygiene and social distancing measures.

Saying that Pakistan is grateful for the support provided by Turkey including 20,000 masks, 50,000 protective suits and 100,000 face shields, Qazi also thanked Ankara for helping repatriate Pakistani citizens stranded in Turkey.

“On its part, Pakistan has provided all possible facilitation to the Turkish nationals stranded in Pakistan. We have also sent one million tablets of chloroquine to Turkey at the request of the Turkish government to help support Turkey’s fight against the pandemic,” the Pakistani envoy said, aiming for further cooperation between the two countries.

Qazi explained that the improvement of Pakistan’s health care infrastructure was one of the country’s priorities even before the pandemic and that he hopes to further strengthen cooperation in the health sector with Turkey. Pointing out that the long-term socioeconomic impacts of the pandemic need addressing as much as the immediate health challenges, Qazi added that the international community faces the threat of poverty, unemployment and social unrest in the wake of this pandemic.

Accordingly, Prime Minister of Pakistan Imran Khan has called for international cooperation on a “Global Initiative on Debt Relief” that aims to seek urgent debt relief for low-income and middle-income countries.

“In global perspectives, regretfully, we are still far from the end of the pandemic,” Sybiha pointed out, “The world is still developing measures to counteract the virus challenge and exist in the new reality. Both for Ukraine and Turkey one of the priorities in this situation was to take care and ensure the return home of their citizens from abroad.”

Turkey recently brought back nine Ukrainian citizens from Argentina along with Turkish expatriates as part of its relief operations during the coronavirus pandemic. The Turkish government has also repatriated around 60,000 of its nationals from various countries since the start of the outbreak.

“Moreover, I would like to emphasize Turkey’s support in organizing the Ukrainian side return of our citizens by the ferry from Karasu (Turkey) – Chornomorsk (Ukraine),” the Ukrainian envoy added.

COVID-19 coordination at top of agenda

Saying that coordination efforts in fighting COVID-19 became Ukraine and Turkey’s top priority as well as the dialogue of both countries’ presidents, Sybiha said: “Thus, the negotiations between the authorities of Ukraine and Turkey helped to minimize the negative consequences of pandemics in trade between our countries, adopt an algorithm of crossing the Turkish border for the Ukrainian carriers and of course, the ways of possible export of the Turkish products needed by Ukraine in the fight against COVID-19.”

Another problem in combating the pandemic lies in the fact that the virus has been spreading and affecting different countries and regions differently, making a common answer or policy a difficult task. The strict level and implementation methods countries have taken as part of the fight against COVID-19 affected the rate of the spread of the virus, despite their population. Thus social security and health care systems have been the main point of focus of many countries.

“Let’s turn this difficult challenge into an opportunity for our nations, our societies, our economies, working together to conceive and shape a post-COVID world based on solidarity and partnership,” Gaiani urged, highlighting that cooperation is not only needed for the areas of scientific research, diagnostics and therapeutics of the disease, where Italy and Turkey are closely working together but also in all sectors gravely affected by the virus.

Accenting that Turkey is one of the brightest examples to follow in fighting COVID-19, Sybiha further stressed that it is very important that the government supported the research on vaccines by the Turkish institutes and medical centers, as well as established local production of lung ventilator machines. Sybiha also praised Ankara’s large-scale aid package, Shield of Economic Stability, as well as the distribution of free masks, disinfectants, free treatment for all categories of citizens in both public and private hospitals along with providing the medical workers with all necessary needs, so that they perform their duties properly.

“I was impressed with the level of self-organization of the Turkish people when they applauded the medical workers with appreciation from the balconies of their homes every night. This was incredible," Sybiha said.

The number of global coronavirus cases surpassed 5.5 million on Tuesday, according to a running tally by U.S.-based Johns Hopkins University. The university's data showed worldwide deaths crossed 346,600, while the number of people who recovered stands at 2.24 million. Overall, the virus has spread to 188 countries since it first emerged in China in December.