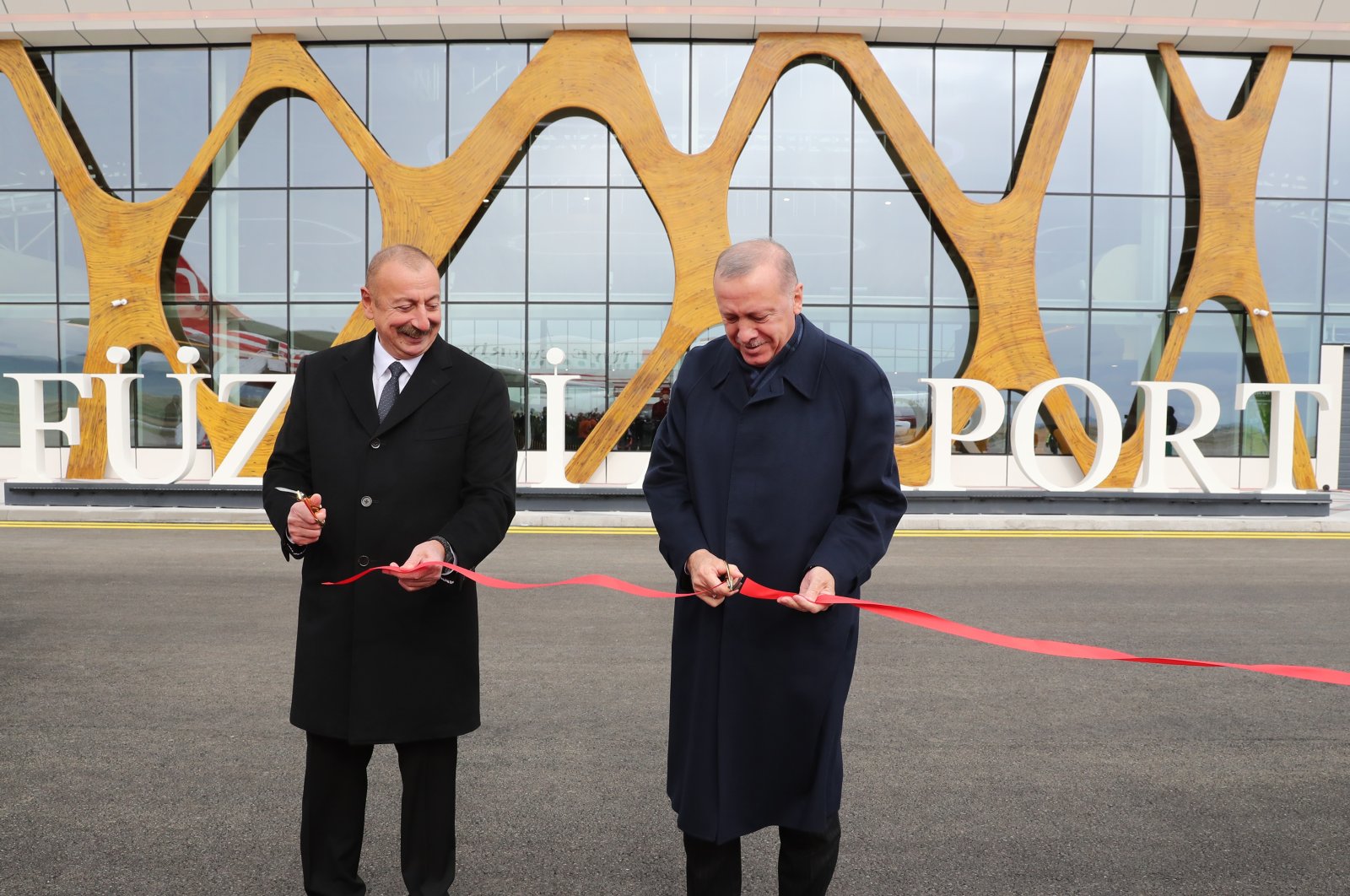 The international airport in Azerbaijan's city of Fuzuli, which was completed in eight months, is the first airport built by Azerbaijan in the area liberated from the Armenian occupation last year. Erdoğan became the first head of state to land at Fuzuli International Airport.

Erdoğan and Aliyev, who jointly cut the opening ribbon of the new airport, then toured the airport building.

On Jan. 12, Aliyev laid the foundation stone of the airport, which managed to meet the highest international standards in eight months. The first test flight to the airport was carried out on Aug. 22.

The runway of the airport is 3,000 meters (9,843 feet) long and 60 meters wide. Its terminal can serve 200 passengers per hour. All wide-body aircraft, including large cargo aircraft, will be able to land and take off easily at the airport.

Turkish companies also took part in the construction of the airport, which is equipped with automatic systems and has a control tower in compliance with international civil aviation and transportation standards.

With the decree signed by Azerbaijani Prime Minister Ali Asadov on Oct. 16, the Fuzuli Airport was granted the status of an "international airport."

The International Air Transport Association (IATA) has included it on the list of international airports with the code of FZL. Thus, the airport will serve as Karabakh's gateway to the world.

The airport is expected to contribute to the development of tourism and trade in the region. Travelers going to Shusha, the symbolic city of Karabakh, will also be transported via this airport.

During one of his visits to the airport, Aliyev said: "The construction of the airport started this year. At that time, I said that Fuzuli International Airport will open this year. Perhaps no airport in the world has been built at this speed. The runway is ready. Final preparations are being made."

The Turkish leader traveled to Azerbaijan for a one-day working visit at Aliyev's invitation.

The Turkish president also attended the groundbreaking ceremonies of a highway in the region and the Smart Agriculture Campus, which will be built in Zangilan with Turkey's contributions.

During the visit, all aspects of the Turkey-Azerbaijan relations were reviewed and initiatives to further deepen bilateral cooperation were discussed.

Current regional and international developments were also expected to be discussed at the meetings.

Erdoğan headed to Azerbaijan Tuesday, his third visit since the liberation of the Karabakh region last November.

The Turkish leader visited Shusha in June, the country's cultural capital that was unlawfully occupied by Armenia for 28 years.

Erdoğan and Aliyev signed the Shusha Declaration during that trip, a pact focused on defense cooperation and establishing new transportation routes.

The Turkish president was also a guest of honor at a special parade held in December 2020 to celebrate Azerbaijan's Nagorno-Karabakh victory.

In his address at the event, Erdoğan reaffirmed Ankara's unwavering support for Baku's security and development goals, vowing that the two countries will make the region a "prosperous, developed and more livable place for our children."

During the 44-day conflict, Azerbaijan liberated several cities and some 300 settlements and villages that were occupied by Armenia for nearly three decades.