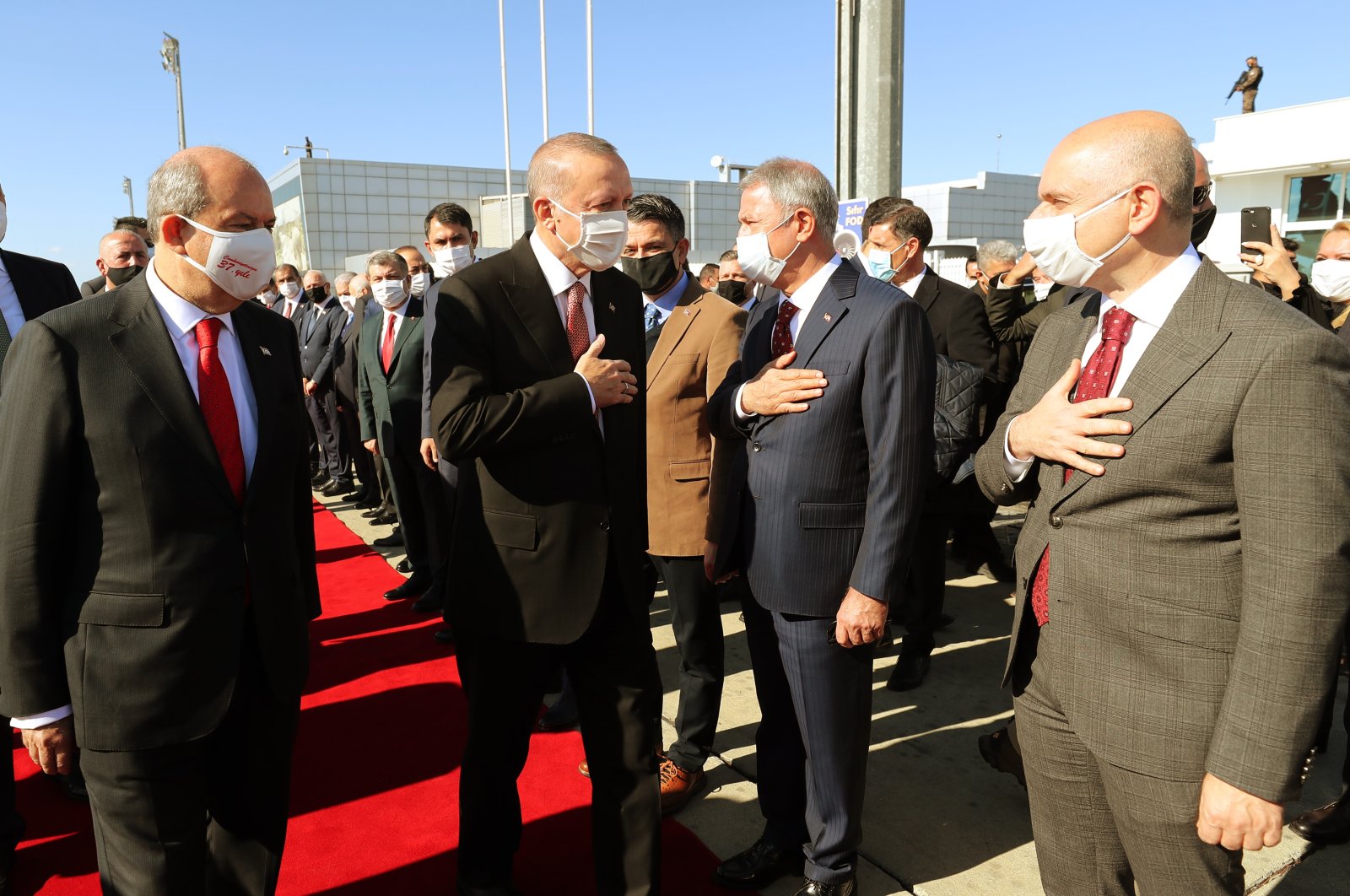 A solution based on the presence of two equal sovereign states should be negotiated on the island of Cyprus, President Recep Tayyip Erdoğan said Sunday. He added that both Turkey and the Turkish Republic of Northern Cyprus (TRNC) can no longer tolerate more "diplomacy games" regarding the hydrocarbon resources in the Eastern Mediterranean.

Speaking at an official ceremony to mark the TRNC's 37th anniversary of foundation in the capital Lefkoşa (Nicosia), Erdoğan said: "There are two peoples and two separate states in Cyprus."

Considering this situation, a two-state solution based on sovereign equality should be negotiated to resolve the Cyprus issue, he said and added that Turkey prioritizes a sustainable solution providing the legitimate rights and security of Turkish Cypriots.

The island of Cyprus has been divided into a Turkish Cypriot government in the north and a Greek Cypriot administration in the south since a 1974 military coup aimed at Cyprus' annexation by Greece. Turkey's military intervention stopped the yearslong persecution and violence against Turkish Cypriots by ultra-nationalist Greek Cypriots. The TRNC was established in 1983 on the northern tier of the island and is only recognized by Turkey. The country has faced an ongoing embargo on commerce, transportation and culture ever since.

The Cyprus issue has seen an on-and-off peace process in recent years, including a failed 2017 initiative in Switzerland under the auspices of guarantor countries Turkey, Greece and the U.K.

Regarding the Eastern Mediterranean disputes, Erdoğan reiterated that Ankara is determined to protect the rights and interests of both Turkey and the TRNC.

Stating that solving problems through dialogue is a priority for Turkey, Erdoğan added that both Turkey and the TRNC do not have any patience left for more diplomacy games.

"For years, we have argued that there should be a chance for cooperation regarding energy resources in the Eastern Mediterranean. However, we did not get results to our well-intentioned efforts," he said.

"A project to carry natural gas and electricity through underwater channels to Northern Cyprus is already underway," Erdoğan also said.

Erdoğan also said the aim of steps taken in the ghost town on Varosha (Maraş) is not to create new aggrievements but to eliminate the existing ones.

Last month, the TRNC partially opened public access in the town of Varosha, which had been abandoned for the past 46 years, in a move welcomed by Turkey and criticized by Greece.

Varosha was a famous resort region in Cyprus that boasted a capacity of 10,000 beds across more than 100 hotels; however, it has been closed since 1974. Varosha is located just north of the "Green Line," which is the present-day border between the two communities and was closed for settlement subsequent to a U.N. decision in 1974. The city is protected by a 1984 U.N. Security Council (UNSC) resolution, stating that the empty town can only be resettled by its original inhabitants.

Turkish Cypriot President Ersin Tatar said the TRNC is ready to return to the negotiating table if new solution models will be discussed.

“The two peoples and two states in Cyprus should cooperate based on existing realities,” he said.

He also reiterated his country’s support of Turkey’s guarantor status and determination to protect its rights in the Eastern Mediterranean.

The president arrived on Sunday in the TRNC, where he was scheduled to attend ceremonies on the country's 37th anniversary of foundation and visit the recently reopened ghost town of Varosha.

Following their arrival to the country, Erdoğan and first lady Emine Erdoğan were welcomed by Tatar with an official ceremony at the airport.

Then, Erdoğan and Tatar attended an official ceremony at the Mustafa Kemal Atatürk monument in the capital. Erdoğan placed a wreath on the monument.

During the meeting of two leaders, Erdoğan and Tatar will discuss the latest developments in the Eastern Mediterranean, along with steps to further strengthen the close cooperation between Turkey and the TRNC. They will also exchange views on the Cyprus issue. Also, Erdoğan will attend the official opening of Lefkoşa Emergency Hospital.

Erdoğan's visit comes nearly a month after former Prime Minister Tatar was elected the new president of the country. Erdoğan hailed Tatar's election as the start of a "new era" on the island of Cyprus. Last week, Erdoğan said his visit to the TRNC underlines solidarity with the "motherland."

Tatar was elected TRNC's fifth president after winning nearly 51.69% of the votes in the second round of elections on Oct. 18. He assumed office on Oct. 23. Last week, Tatar held his first informal meeting with Greek Cypriot leader Nicos Anastasiades. The face-to-face meeting took place at the residence of the head of the United Nations Peacekeeping Force in Cyprus, Elizabeth Spehar, in the buffer zone in Nicosia and lasted about two hours.