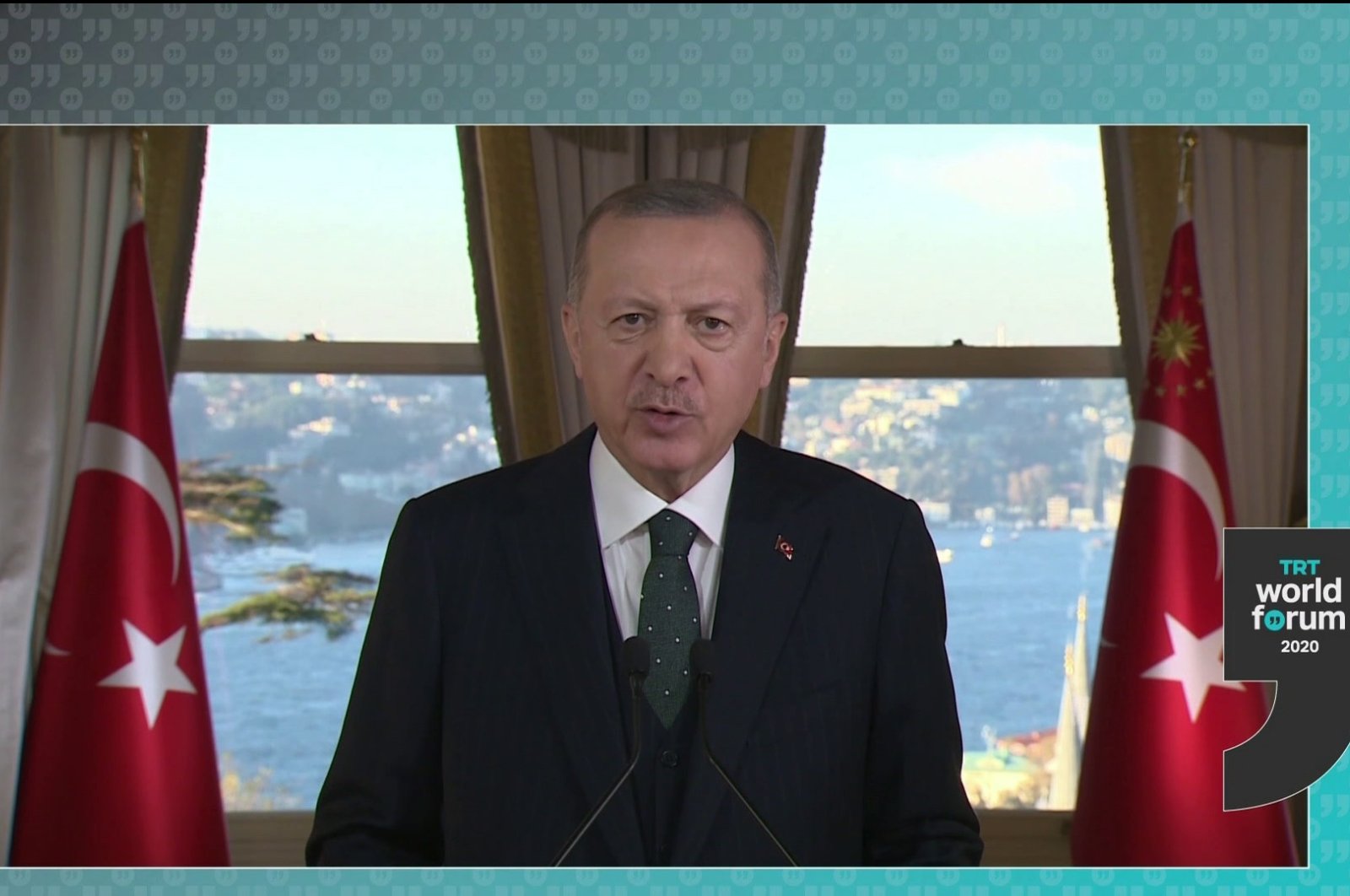 President Recep Tayyip Erdoğan on Tuesday accused the international media of keeping silent on France's blockade on the media and criticized its biased stance toward Turkey.

Speaking at the inauguration ceremony of the TRT World Forum, Erdoğan said international media acts hypocritically toward Turkey, trying to twist the realities of the country while overlooking many alarming practices in the European states like France.

"Especially since the 2013 Gezi Events, our country has faced a serious unfair stance and double standard. The ones who burned down the streets have been presented as peaceful protestors by the international media outlets who were broadcasting live for 24 hours," the president said.

He added that a similar stance is also valid for the terrorists who are killing hundreds of thousands of civilians in Syria and yet somehow found a place for themselves on the covers of the so-called "prestigious" Western magazines.

"However, when similar events take place in various European states, the ones who dared to give us a lesson on freedom of press play ostrich. They ignored the yellow vest protests that lasted for months at the center of Paris. They never mentioned French police officers' disproportionate intervention that blinded the protestors. They did not mention a word on French state institutions' blockade on the media," he underlined.

The French government has dropped a controversial bill that would have curbed the right to film police officers in action, the speaker of French President Emmanuel Macron's ruling party said Monday.

Last Tuesday, the lower house of parliament gave initial approval to a security bill that would restrict the publication of photos or videos of police officers' faces, although it still faces further legislative hurdles.

French activists feared that the proposed security law would have deprived them of a potent weapon against abuse – cellphone videos of police activity – threatening their efforts to document possible cases of police brutality, especially in impoverished immigrant neighborhoods.

Tens of thousands of people across France marched against the draft law Saturday.

The French government has been under growing pressure to address long-running accusations of excessive violence by police, particularly against minorities. Some Black Lives Matter protests broke out in Paris in June, a month following the death of George Floyd after a white police officer knelt on his neck in a street in the U.S. city of Minneapolis for nearly nine minutes in the course of arresting him.

The outrage generated by Floyd’s death has resonated in France, in particular in deprived city suburbs where police often clash with youth from ethnic minority backgrounds. The protests in Paris in June focused on unsolved cases of people dying during police operations, such as Adama Traore, who died in police detention near Paris in 2016. Young people in French working-class suburbs with a large immigrant population have long complained of police violence, with an upsurge in complaints during the first coronavirus lockdown earlier this year. Racist comments allegedly made by police officers in a Facebook group also sparked outrage.

The media’s tendency to turn a deliberate blind eye to the French government’s attempt to erode press freedoms has been one of Erdoğan’s main talking points recently.

Pointing at the fact that a similar double standard is also being imposed on “Israeli state terror toward Palestinians,” Erdoğan said in Tuesday's speech that the Western media never mentions the unfair suffering of the Palestinian children at the hands of Israel.

“Only a few days ago, an ambulance carrying a wounded Palestinian was stooped and they to take the person in custody. And no reaction has come from the international media,” he said. Erdoğan added that he himself is also the victim of “disgusting headlines” of this “biased” media.

“It is really embarrassing for media outlets to carry Islamophobic and xenophobic banners,” the president said.

Erdoğan also warned that if no one says “stop” to this trend in the international media, then “not only Europe but the whole of humanity will suffer from the consequences.”

Many pundits express that Islamophobia is deepening in Europe with the populist discourses and policies of politicians like Macron and Austrian Prime Minister Sebastian Kurz. The two are considered to have adopted the arguments of the far-right and implemented laws that restrict the fundamental rights of Muslims.

Islamophobia in France has become violent, as was exhibited in an incident where police treated four Muslim children, three of them Turkish, as terrorists, detaining the 12-year-old schoolchildren for 11 hours and opening an investigation into them over suspicions of “terrorist” propaganda. France has the largest Muslim minority in Western Europe, nearly 5 million.

Another major topic that the president mentioned heavily was the uncontrolled digitalization of media and its possible dangers.

“Digitalization will direct us to fascism if perceived as the area with no control, open to arbitrariness, outside of the law,” Erdoğan expressed, adding that under the premise of “limitless freedom,” new victims are emerging every day.

He referred to “cyberbullying” as one of the primary reasons for many psychological and social problems. “The victims cannot find any authority or any legal institution to claim their rights. A system where the one who commits the crime gets away with it cannot be labeled as freedom,” the president continued.

“With digitalization expanding the field of freedom, it should not lead to new inequalities, injustices, marginalization,” he said.

Criticizing the social media platforms for not even attempting to prevent the increasing injustices, Erdoğan expressed that when the states take steps to protect their citizens, they immediately face allegations of curbing freedoms.

“As Turkey, we have been mentioning the unfairnesses on this issue and highlight that no company is above the law,” he added.

In July, the parliament ratified the social media regulation bill, compelling platforms to comply with conditions or face fines and bandwidth reduction.

It defines real or legal entities that allow users to create, monitor, or share online content such as text, visual content, voice recordings and locations for social interaction as social network providers.

Under the bill, the foreign-based social network providers that have more than 1 million daily visitors in Turkey are expected to assign at least one representative in the country.

The representative are tasked with responding to individual requests to take down content violating privacy and personal rights within 48 hours or provide grounds for rejection. The company is held liable for damages if the content is not removed or blocked within 24 hours.

“Our wish is to see support from these companies that see themselves outside the law to respect our country’s well-intentioned attempts,” the president highlighted and continued: “Otherwise, Turkey will continue to protect the laws of its citizens under any circumstances.”

This year’s TRT World Forum, held by state broadcaster TRT’s English-language service, is being held under the theme “Shifting Dynamics: The International Order in a Post-Pandemic World.”

Noting that the two-day online forum will feature sessions on subjects from digitalization to technology, trade to Syria, and Yemen to clashes in Nagorno-Karabakh, Erdoğan wished the event all success in his finishing remarks.