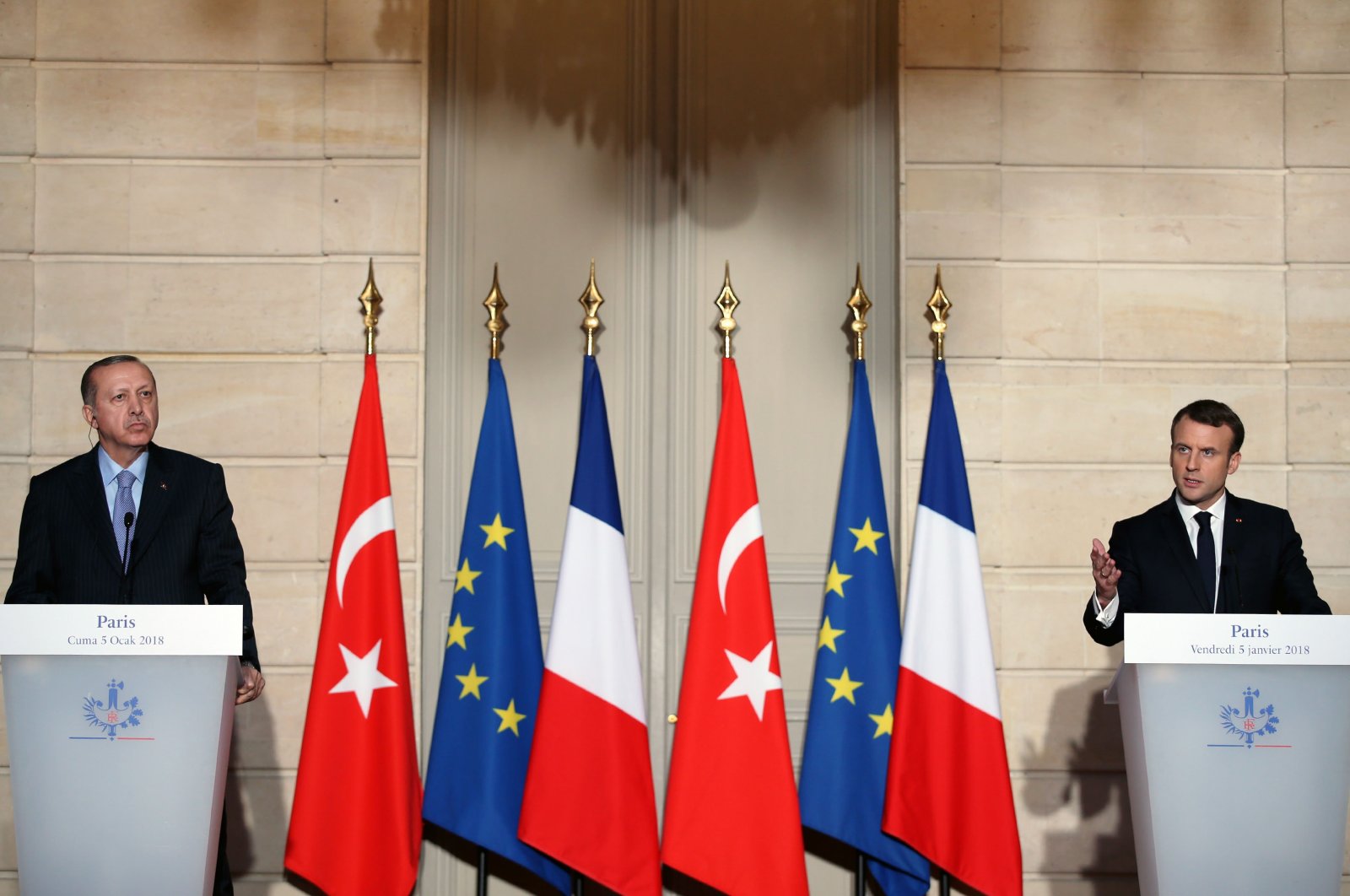 President Recep Tayyip Erdoğan speaks at a joint news conference with his French counterpart Emmanuel Macron in the capital Ankara, Turkey, May 13, 2020. (Courtesy of the Turkish Presidency)
by DAILY SABAH Sep 22, 2020 5:43 pm
RECOMMENDED

President Recep Tayyip Erdoğan and French President Emmanuel Macron held a phone call on Tuesday evening for the first time since tensions flared over disagreements in the Eastern Mediterranean. In a statement, Turkey's Communications Directorate said that Erdoğan told Macron that Turkey advocates dialogue and cooperation to solve problems.

In the phone call, Erdoğan said the reason for the tensions in the Eastern Mediterranean is that other actors ignore Turkey and Turkish Cypriots' legitimate rights in the region.

Erdoğan reiterated that Turkey does not have an eye on other countries' rights but will not allow anyone to ignore its rights either. He added that a solution can only come through dialogue and cooperation.

Erdoğan also told Macron that Turkey expects France to display a “responsible and constructive” approach and that channels for consultation and communication between the two countries should “continuously remain operational,” according to the statement from Ankara.

He added that it is important to see "constructive dialogue and cooperation" at next week's EU Leaders Summit for possible solutions to regional issues.

The meeting, originally set for this week, was postponed to Oct. 1-2 due to a coronavirus infection close to an EU official.

According to a statement issued by the Elysee Palace, Macron said his country was always ready for dialogue and attached importance to a solid relationship between the EU and Turkey.

The issues of Libya and Syria along with the Eastern Mediterranean were discussed in the conversation, which lasted more than an hour, it said.

The statement also underlined that Macron hailed the exploratory talks that will begin soon between Turkey and Greece.

Macron stressed that he wanted the talks to be held in good faith and with the concern of lowering the pressure in the region, the statement said, adding that the French leader also called for a similar dialogue to be conducted between Turkey and the Greek Cypriot administration.

It was stated that the two leaders decided to continue the dialogue on these issues at the presidential and ministerial levels.

In addition to the Eastern Mediterranean, the two leaders also discussed bilateral relations, Turkey-EU relations and other regional issues.

Before the call, a French presidential official said Macron would reaffirm the French position over the tensions between fellow NATO members Turkey and Greece after Ankara stepped up hydrocarbon research activities in the sea.

France in late August had also deployed military jets to the Greek side of the island of Cyprus under the pretext of holding a drill with Greece and Italy, which was criticized by Turkey for violating the 1960 treaties on Cyprus.

The phone call comes after Erdoğan earlier on the same day had a videoconference with German Chancellor Angela Merkel and European Council head Charles Michel over de-escalating tensions and fostering dialogue in the Eastern Mediterranean.