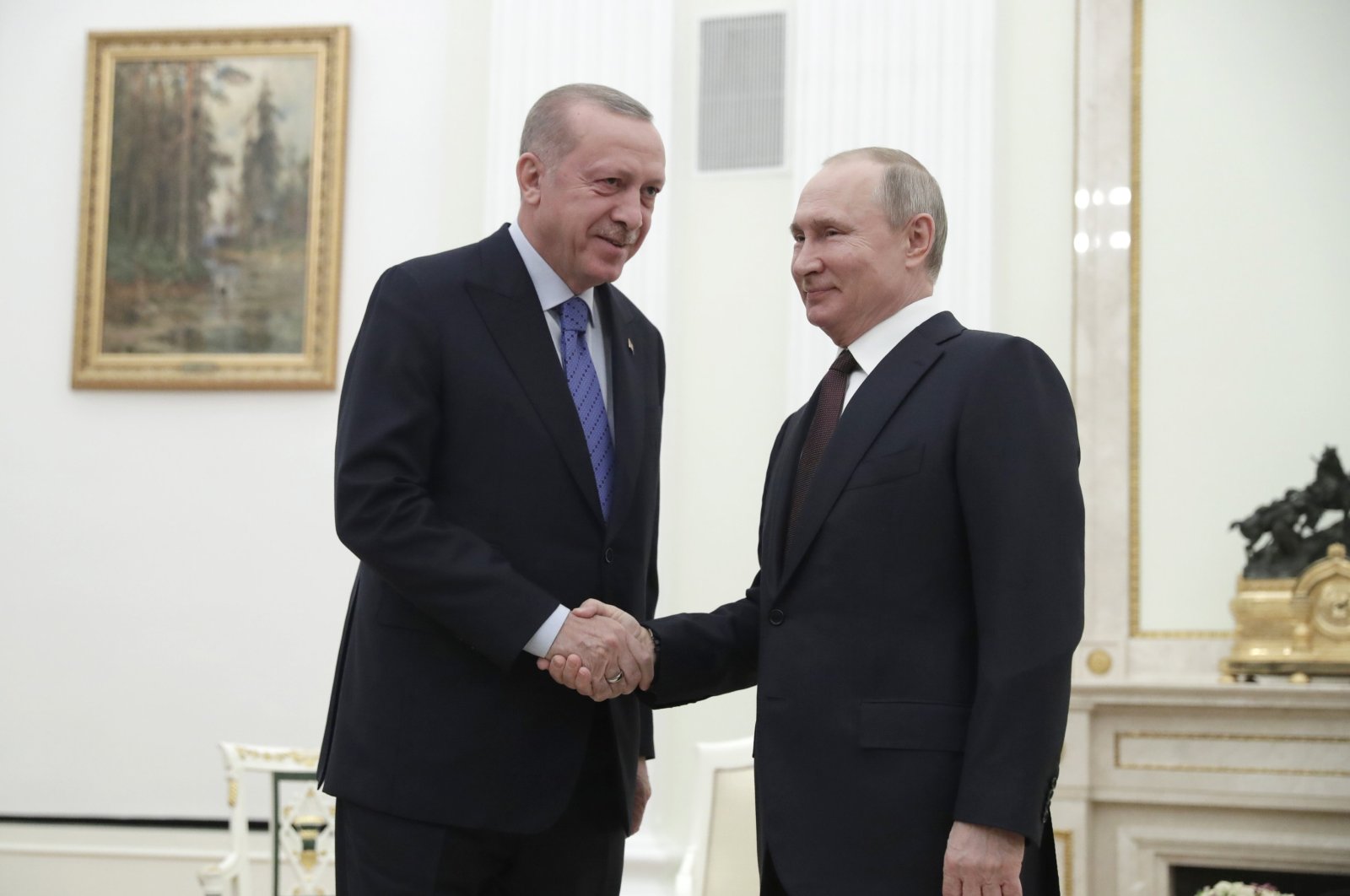 President Recep Tayyip Erdoğan (L) and Russian President Vladimir Putin shake hands prior to their talks at the Kremlin in Moscow, Russia, March 5, 2020. The Turkish and Russian leaders are set to hold talks in Moscow aimed at avoiding pitting their nations against each other, during hostilities in northwestern Syria. (AP Photo)
by DAILY SABAH Apr 09, 2021 5:26 pm
RECOMMENDED

Putin told Erdoğan that it is important to observe the current requirements of the Montreux Convention on Turkish straits amid reports on U.S. plans to bolster its presence in the Black Sea.

The United States notified Turkey two weeks ago that it planned to send two warships through the Turkish straits toward the Black Sea in line with the Montreux Convention, Turkish diplomatic sources shared Friday, adding that the vessels will remain in the Black Sea until May 4.

The move comes at a time that Russia has bulked up its military presence on Ukraine's eastern border. "A notice was sent to us 15 days ago via diplomatic channels that two U.S. warships would pass to the Black Sea in line with the Montreux Convention.

"The ships will remain in the Black Sea until May 4," Foreign Ministry sources said, adding that the ships are expected to arrive on April 14 and April 15, separately.

The announcement triggered an immediate reaction from Moscow, which expressed concern over the increased activity in the Black Sea, as IFAX reported Friday. "Any such movements must be in line with the Montreux Convention," Russia expressed

The 1936 Montreux accord gives Turkey control over the Bosporus and Dardanelles straits. It also limits access to naval warships and governs foreign cargo ships.

Following these statements, dozens of troop carriers and missile launchers were positioned on flatbed wagons lining tracks running through southern Russia, in a region bordering Ukraine. Tanks are parked in columns beside the railway, which runs parallel to the M4 highway. Military trucks rumble past, heading toward the southern city of Rostov-on-Don, close to the border.

"We are in contact with the Americans, this is happening at a high level," Russia's Deputy Foreign Minister Sergei Ryabkov was previously quoted as saying by Interfax news agency. He said Moscow had rejected as "unfounded" concerns raised by Washington over the situation. He accused Ukraine of failing to implement agreements over the region. "If our American colleagues were concerned about this, it would really help stabilize the situation," he was quoted as saying.