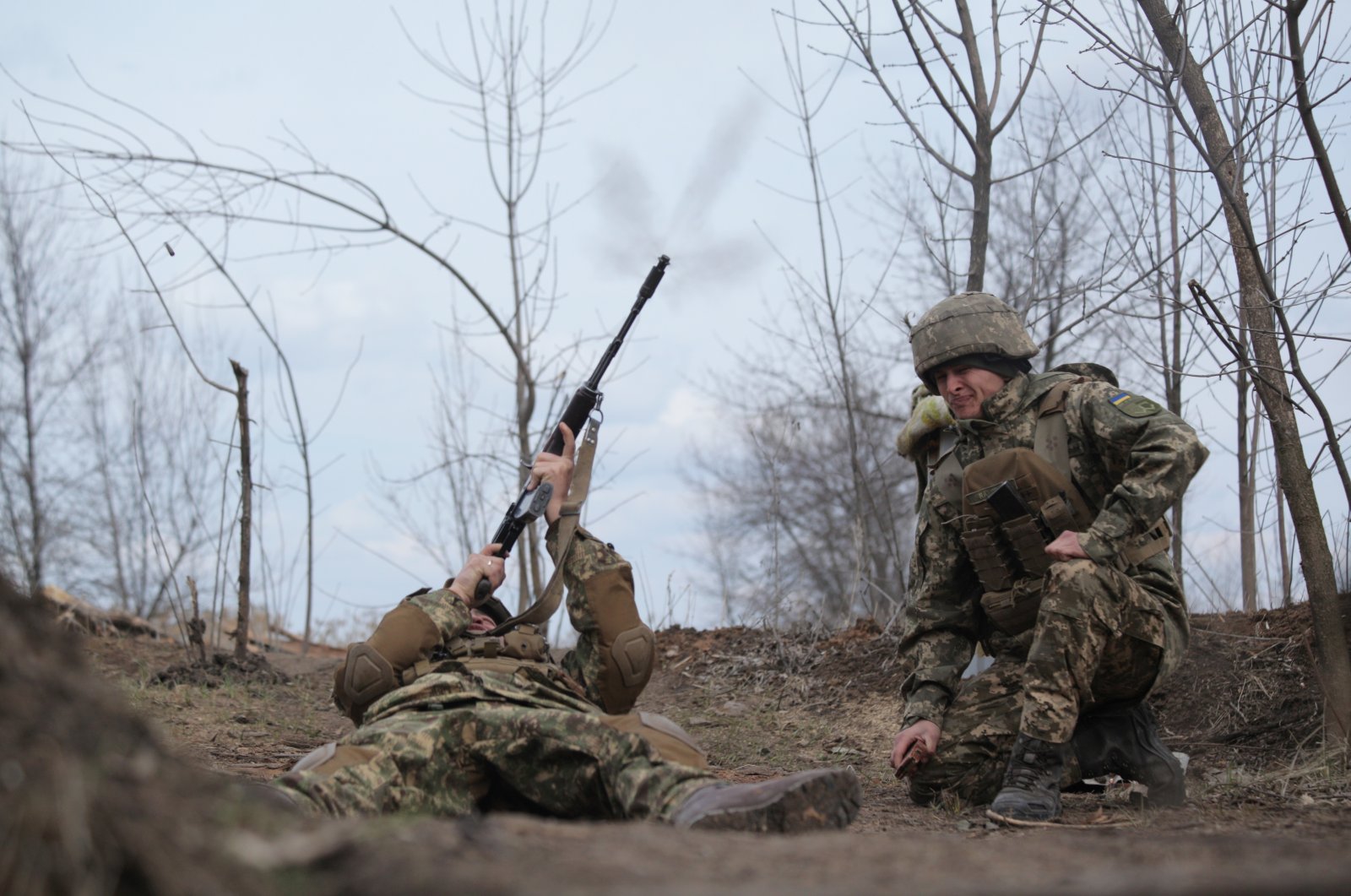 Service members of the Ukrainian armed forces on the line of separation near the rebel-controlled city of Donetsk, Ukraine, April 9, 2021. (Reuters Photo)
by DAILY SABAH
Apr 09, 2021 2:02 pm

The United States notified Turkey two weeks ago that it planned to send two warships through the Turkish Straits toward the Black Sea in line with the Montreux Convention, Turkish diplomatic sources shared Friday, adding that the vessels will remain in the Black Sea until May 4.

The move comes at a time that Russia has bulked up its military presence on Ukraine's eastern border.

"A notice was sent to us 15 days ago via diplomatic channels that two U.S. warships would pass to the Black Sea in line with the Montreux Convention. The ships will remain in the Black Sea until May 4," Foreign Ministry sources said, adding that the ships are expected to arrive on April 14 and April 15, separately.

The announcement triggered an immediate reaction from Moscow, which expressed concern over the increased activity in the Black Sea, as IFAX reported Friday.

"Any such movements must be in line with the Montreux Convention," Russia expressed.

The 1936 Montreux accord gives Turkey control over the Bosporus and Dardanelles straits. It also limits access of naval warships and governs foreign cargo ships.

Following these statements, dozens of troop carriers and missile launchers positioned flatbed wagons lining up along tracks running through southern Russia in a region bordering Ukraine.

Tanks are parked in columns beside the railway, which runs parallel to the M4 highway. Military trucks rumble past, heading toward the southern city of Rostov-on-Don, close to the border.

The U.S. State Department said on April 5 that it has asked Moscow to explain "provocations" on the border with Ukraine amid the Russian military build-up.

State Department Spokesperson Ned Price told a news briefing that the United States would be concerned by any effort by Moscow to intimidate Ukraine whether it occurred within Russian territory or within Ukraine.

Earlier on the same day, Russia said it was in high-level contact with the United States about tensions over Ukraine and dismissed fears of Russian military buildup even as it vowed to respond to new Ukrainian sanctions.

Last week, the U.S. also warned Russia against "intimidating" Ukraine, with both Defense Secretary Lloyd Austin and Secretary of State Antony Blinken calling their Ukrainian counterparts to stress support. The Pentagon said this week U.S. forces in Europe had raised their alert status following the "recent escalations of Russian aggression in eastern Ukraine."

"We are in contact with the Americans, this is happening at a high level," Russia's Deputy Foreign Minister Sergei Ryabkov was previously quoted as saying by Interfax news agency.

He said Moscow had rejected as "unfounded" concerns raised by Washington over the situation. He accused Ukraine of failing to implement agreements over the region.

"If our American colleagues were concerned about this, it would really help stabilize the situation," he was quoted as saying.

Meanwhile, Friday's news also received a reaction from Ukraine as the country expressed Russia is trying to discredit Ukraine with a disinformation campaign and to sow panic in Donbass region.

Ruslan Khomchak, the head of Ukraine's Armed Forces, said Kyiv had intensified military dialogue with NATO and the country's military was taking part in training events, including NATO drills.

"Ukraine's Euro-Atlantic choice is the sovereign right of our state, which Russia has no right to influence," Khomchak said.

Ukraine, Western countries and NATO accuse Russia of sending troops and heavy weapons to prop up proxies in Donbass.

Russia has rejected the claims, arguing that it can deploy its troops wherever it deems necessary on its territory and emphasizing that they don't threaten anyone. It has accused Ukrainian authorities of trying to stoke up tensions in the east for domestic policy purposes.

In Thursday's call with German Chancellor Angela Merkel, Russian President Vladimir Putin "drew attention to the provocative actions of Kyiv, which has deliberately sought to exacerbate tensions along the line of control,” the Kremlin said in its readout of the call.

Merkel’s office said she discussed the increased Russian military presence in the area near eastern Ukraine with Putin, and "called for the removal of these troop reinforcements in order to achieve a de-escalation of the situation.”

Ukraine over the weekend targeted several Russian companies with sanctions as part of what it said was a clamp-down on smuggling.

On April 5, the Kremlin said Moscow would respond to those sanctions. It also said it was up to Moscow to move its military around in Russia as it saw fit and that those movements posed no threat to Kyiv.

"I want to be with our soldiers in the tough times in Donbas,” Ukraine's President Volodymyr Zelenskiy tweeted as he headed to the conflict area on April 8, Thursday.

Ukraine and many Western nations have accused Russia of sending troops and weapons to eastern Ukraine to support the rebels – accusations the Kremlin has denied.

Later in Friday, Blinken and his French and German counterparts reaffirmed in separate telephone calls support for Ukraine as it confronts the Russian military buildup and Russia-backed separatists, the U.S. State Department said.

Blinken and French Foreign Minister Jean-Yves Le Drian "discussed the need for Russia to end its dangerous and irresponsible rhetoric, its military buildup in occupied Crimea and along Ukraine’s borders, and unilateral Russian provocations along the Line of Contact in eastern Ukraine."

In a separate call, Blinken and German Foreign Minister Heiko Maas "emphasized the importance of supporting Ukraine against unilateral Russian provocations" along the contact line.

Maas, for his part, said after talks with Blinken that Western allies are closely watching developments on Russia's border with eastern Ukraine, where Moscow has been amassing troops,

"We are keeping a close eye on the situation with partners in NATO and the EU," Maas said on Twitter. "We agreed that Russia must de-escalate and restore military transparency."

Ukraine and France are both concerned about the build-up of Russian troops near the border of eastern Ukraine, Ukraine's Foreign Minister Dmytro Kuleba also said in another statement on Friday after speaking to his French counterpart Le Drian.

Both countries agree that four-way peace talks between Ukraine, Russia, Germany and France over the conflict in the Donbass region must remain active, Kuleba said.