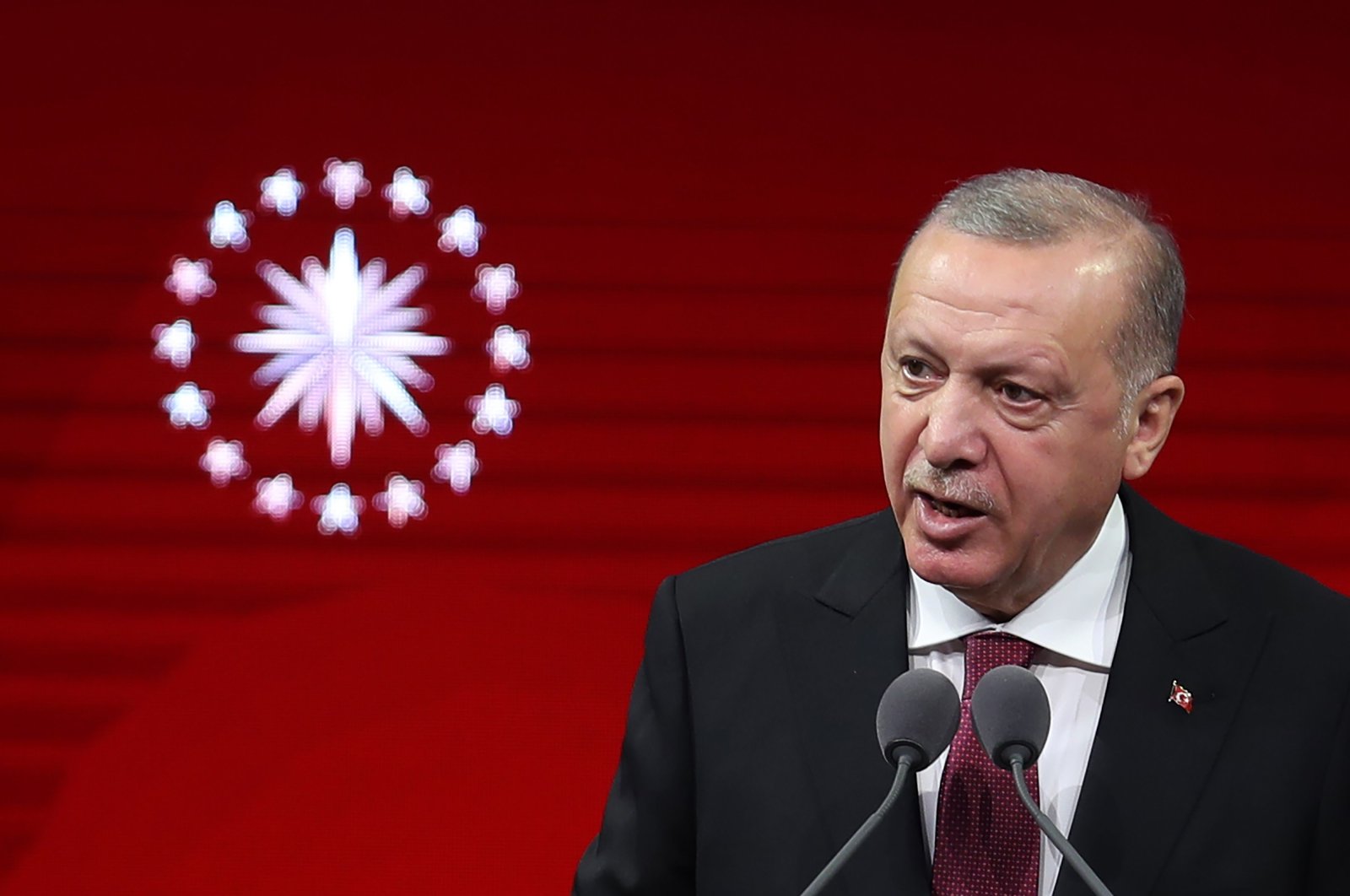 President Recep Tayyip Erdoğan’s lawyers filed a criminal complaint on Monday against those in charge of a Greek newspaper that ran a "wretched" headline about him.

"The terms that are used against the president in the Greek newspaper are one of the ugliest reflections of a dramatic moral collapse," said the petition used in filing the complaint against Dimokratia News.

It added that the Greek people's silence on the issue signals that this "moral collapse is not limited with the marginal groups."

On Friday, Dimokratia News' main story on Turkey-Greece tensions in the Eastern Mediterranean was published with the headline reading "F--- off, Mr. Erdoğan" in Turkish, which appears next to a photo of the president. The move received plenty of buzz on social media, especially among Turkish users.

On the other side, however, the only statement came from the Greek Foreign Ministry, which said, "The use of offensive language is contrary to our country's political culture and can only be condemned."

Yet, the ministry also said freedom of expression and of the press were fully protected in the European Union member country.

The newspaper also insisted on backing the headline rather than acknowledge any wrongdoing. Releasing yet another article on Saturday, with the title "The 'Democracy' hurt the Turks," the newspaper stated that the curse on its front page "finally, said everything that all the Greeks wanted to say in the last two months." The article also implied that the Greek Foreign Ministry backed the newspaper with its statement on the issue. Dimokratia News also reacted to counter voices against the front page from within Greece, referring to them as "Turkophiles."

"The swearword is the language of the ones who have nothing to say or the ones who are lacking the ability to express themselves in a proper way. The swearword is a shame and despicableness for the one who expresses it, not the one which it is being addressed to. The target of this action is not only our president but also our nation's high interests which are being defended by our president in the Eastern Mediterranean and the Aegean Sea," Erdoğan's petition against the newspaper continued.

The president's motion also referred to Article 10 of the European Convention on Human Rights (ECHR), which is used by the European Court of Human Rights when making decisions on similar subjects. It states that the freedom of expression does not provide an unlimited right of manifesting oneself but instead can be restricted with certain purposes that are also mentioned within the article itself.

The petition notes the following restrictions within Article 10: "The exercise of these freedoms, since it carries with it duties and responsibilities, may be subject to such formalities, conditions, restrictions or penalties as are prescribed by law and are necessary in a democratic society, in the interests of national security, territorial integrity or public safety, for the prevention of disorder or crime, for the protection of health or morals, for the protection of the reputation or rights of others, for preventing the disclosure of information received in confidence, or for maintaining the authority and impartiality of the judiciary."

Meanwhile, Ankara's Chief Public Prosecutor's Office launched an investigation into the newspaper on Monday regarding the defamation act.

In a letter to his Greek counterpart Konstantinos Tsiaras, Abdulhamit Gül stressed that he "strongly condemned" the unacceptable and despicable headline in the Greek daily Dimokratia News. He highlighted that although it was presented as being covered by freedom of the press, the headline had nothing to do with freedom or peaceful intentions.

Gül said he believes Greek authorities will approach the matter sensitively and immediately take necessary actions under the rule of law in response to the paper's unacceptable article.

He added that he hopes Turkish-Greek relations will keep improving without compromising the law against such vulgar language, which aims to sabotage bilateral ties.

Turkey had summoned the Greek envoy to register a protest against the news item. Turkish politicians also reacted to the disrespectful act, calling it "shameful."

"The shameful record will remain a black mark in Greek press history," Turkish Defense Minister Hulusi Akar was quoted as saying on Sunday in a statement by National Defense Ministry on Twitter.

He condemned the "extremely worthless statement," saying it was "not even related to journalism."

The minister said anyone with common sense, including the clear-headed Greek people, would reject it.

"We expect the necessary administrative and judicial actions to be taken immediately by Greek authorities against those who aim to sabotage bilateral relations and are already doomed in the public conscience," he added.

Turkey's Communications Director Fahrettin Altun has also condemned the newspaper. "We ask the Greek government to hold accountable those responsible for this shameless and wretched move," he tweeted.

Ömer Çelik, the spokesperson for the ruling Justice and Development Party (AK Party), also censured the "ugly and despicable" statement, saying that the "poisonous language" of some Greek politicians was behind the move.

The two NATO countries are already locked in a heated dispute over energy exploration in contested waters in the Eastern Mediterranean.

Turkey's deployment last month of a research vessel prompted the neighbors to stage rival air and naval drills in strategic waters between the island of Cyprus and the Greek island of Crete.

Last weekend, Ankara pulled the vessel back to the shore for maintenance and replenishment after its one-month mission. Erdoğan said on Friday that Turkey wanted to give diplomacy a chance and did not rule out a meeting with Greek Prime Minister Kyriakos Mitsotakis via videoconference or in a third country.