Erdoğan’s call to international community: A fairer world is possible 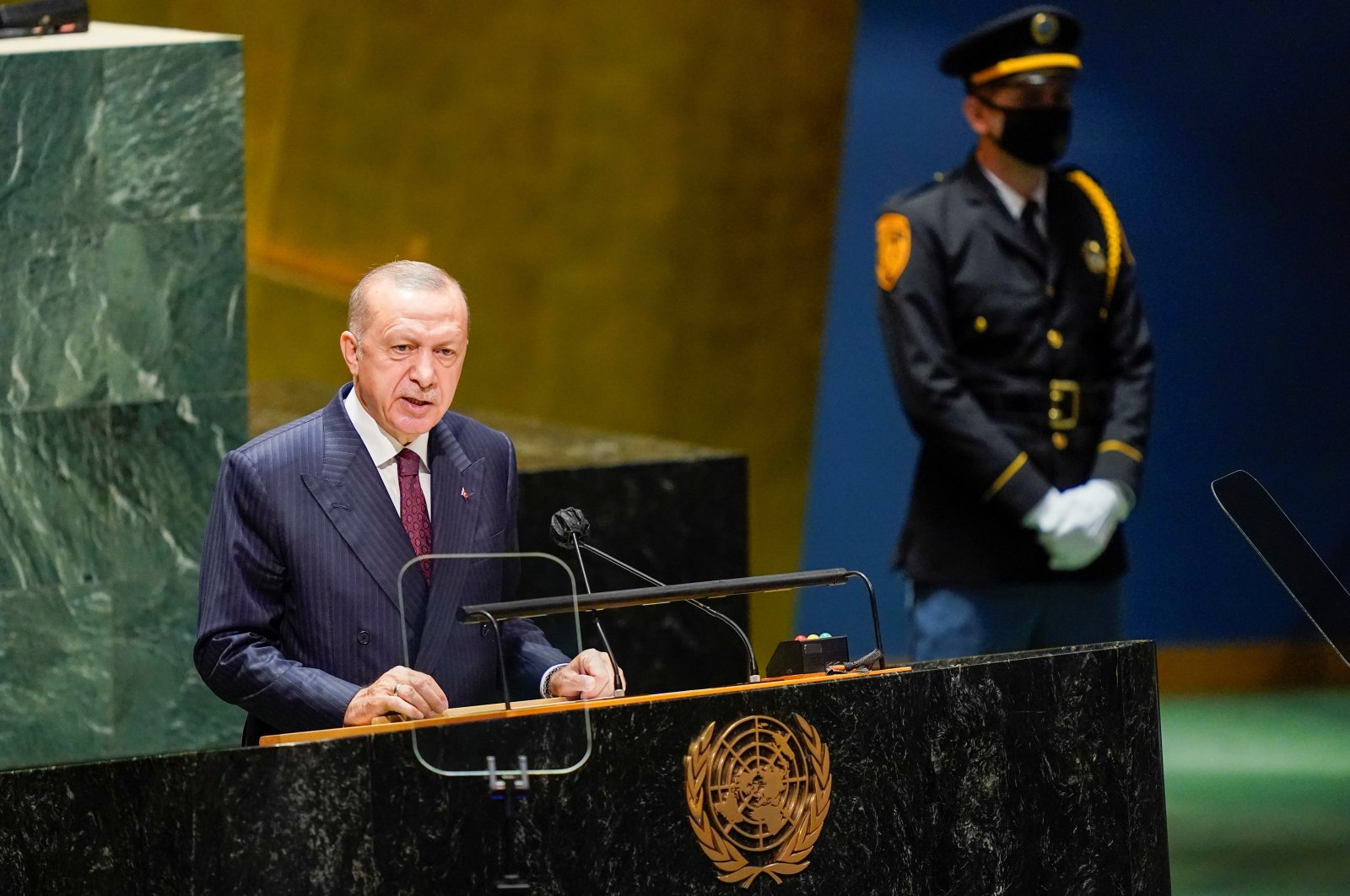 During his visit to New York to attend the United Nations General Assembly, Erdoğan once again urged a fairer global system

President Recep Tayyip Erdoğan reiterated Turkey's hope for a more just world for both Turks and Muslims living in the United States, during his visit to New York to attend the 76th session of the United Nations General Assembly.

On Sept. 19-22, Erdoğan was in New York to attend the 76th General Assembly meeting of the United Nations. On Sept. 20, he officially opened the new Turkish House, a 36-story building across the United Nations headquarters.

The U.N. General Assembly took place in a mixed format for the first time this year. Almost two-thirds of member states physically participated at the head of state, government or ministerial level. Unlike previous years, some of the events were held virtually. Erdoğan attended the U.N. Food Systems Summit and the U.N. High-Level Energy Dialogue Meeting by videoconference.

During his visit to New York, Erdoğan also met with representatives of the Turkish American and American Muslim communities on Sunday, Sept. 19.

At the opening of the Turkish House, Erdoğan was accompanied by the U.N. Secretary-General Antonio Guterres, with many heads of state and government, foreign ministers, high-level local and foreign guests. The 36-story Turkish House building graces the New York skyline as the diplomatic and cultural center that was built inspired by historic Turkish architecture. The U.S. launch of the book "A Fairer World is Possible" written by Erdoğan was also held in New York.

The book, in which Erdoğan describes in detail Turkey's pursuit of justice for all humanity and demand for a fairer world especially for the formation of the permanent members of the U.N. Council was published in English, Arabic, French and Turkish by Turkuvaz Kitap.

United Nations and a fairer world

In his speech at the opening session of the United Nations General Assembly, Erdoğan expressed his views on issues concerning international peace and security. He expressed from the rostrum of the General Assembly that a fairer world is possible and the responsibilities that fall on the international community to accomplish this goal. He reiterated the importance of cooperation and solidarity at a time when humanity is overwhelmed by the threat of epidemics and natural disasters and their severe consequences. He expressed Turkey's approach in a wide geography from Syria to Libya, from the issue of Jerusalem and Palestine to the Caucasus, from Turkistan to Cyprus, and especially the latest developments in Afghanistan.

Erdoğan also addressed Turkish reporters accompanying him during the visit. The interview took place at the newly opened Turkish House (Türkevi) in New York ahead of Erdoğan's return trip to Turkey. He said, "The world is no longer in World War I conditions nor in the conditions of World War II. So let's give a signal to humanity. If we can be in solidarity with all 194 countries, if we force these conditions together with all global media and NGOs, then these permanent members have to control themselves once again."

Erdoğan also called out to Africa: “Africa, will you always go on like this? What are you doing by being in the United Nations as a temporary member? Is there anything you can do? Can you change anything? No. So, in order to change this game, we say that you all have a chance to become permanent members. So every African country that they don't care about should have a chance to become a permanent member of the U.N. Security Council."

During his speech in the General Assembly, Erdoğan also announced that he would complete the ratification process of the Paris Climate Agreement. Erdoğan said, "Those who have the biggest responsibility in our world's turn into this (current climate crises) should also contribute the most to the solution of the problems caused by climate change." Adding that he is determined that Turkey will do its apart, as a country that increases its forest wealth and has very low carbon emissions thanks to its relatively modern technological infrastructure, Erdoğan announced that Turkey will take steps in line with the issues specified in the Paris Climate Agreement. Turkey's carbon-neutral target within the framework of the agreement is set as a target for 2053.

Furthermore, Erdoğan held meetings with representatives of many states, governments, international institutions and nongovernmental organizations in New York for the U.N. General Assembly at the Turkish House. In this context, meetings were held with the presidents of Croatia, Slovenia, Guinea Bissau, Poland, Ukraine, Finland, Burundi and Iraq, as well as the prime ministers of the United Kingdom, Georgia and Albania, and the chairperson of the Presidential Council of Libya, as well as the secretary-general of the United Nations.

Answering a question about Turkey’s stance on the latest developments in Afghanistan, Erdoğan pointed the United States’ failure and indifference to the situation. He underlined the way how the U.S. left out the country and who will be paying the price for their irresponsible behavior. Erdoğan said: "It is unthinkable for Turkey to open doors and accept them. Our country is not an open air corridor. It is not easy to accept such a thing. This action has a price and cost."

"The United States cannot say, Open the doors and let the Afghan people enter Turkey. It is the U.S. that has to pay the price here. The U.S. needs to take steps in this regard," he added.

President Erdoğan also signaled that Turkey would take further steps with Afghanistan if an inclusive administration is formed and if Turkey has healthy communication with this administration.

Turkey so far had made serious investments in Afghanistan in infrastructure and superstructure but looking for an embracing and encompassing administration to be formed in the country. Erdoğan stated that "unfortunately, only limited signals are coming from the current administration for the inclusive atmosphere’ however if they overcome these problems ‘Turkey can draw a road map, and take steps with Afghanistan."

"I cannot honestly say that there is a healthy process in Turkish-American relations," Erdoğan said in his interview with journalists. "We bought the F-35s, paid $1.40 million, and these F-35s were not delivered to us. They did not give us the F-35s by using the S-400 issue as an excuse," he said answering a question to assess the future of Turkish American relations.

"I worked well with George W. Bush, Barack Obama, Donald Trump but I cannot say we started well with Joe Biden," Erdoğan also said, expressing discontent with the incumbent U.S. President. "After 19 years in office, I can’t say that we have reached a good position with the U.S.," he added.

Turkey’s initial purchase of S-400s from Russia strained ties with the United States. The move prompted Washington to remove Turkey from the new generation F-35 Lightning II jet program. The U.S. had also threatened to impose new sanctions if Turkey buys more major arms systems from Moscow. The U.S. argued that the system could be used by Russia to covertly obtain classified details on the Lockheed Martin F-35 jets and is incompatible with NATO systems. Turkey, however, insists that the S-400 would not be integrated into NATO systems and would not pose a threat to the alliance.

"It is not possible for us to accept that they are constantly imposing the S-400 on us. For us, the S-400 dispute is over. We cannot take a step back from here. America needs to settle this issue properly with international diplomacy and relations. But so far they have not been able to settle this dispute. As Turkey, we act honestly, our stance is honest, but unfortunately, America acted dishonestly," Erdoğan told reports in New York. "We already have a trade volume of around $20 billion in our relations with America. We wish and would like to increase this trade volume. We are also taking steps towards the defense industry and will continue to do so. They should also know that the old Turkey does not exist anymore. This Turkey is another Turkey. In the defense industry, we are going further, and we will go further," he added.

Erdoğan announced that a bilateral meeting is planned with Russian President Vladimir Putin in Sochi on Sept. 29, in order to speak about issues on Russian-Turkish bilateral relations, Idlib and Syria. President Erdoğan underlined that the meeting will be between Putin and himself without a third party and that would be easier to discuss, talk and make important decisions on the abovementioned issues between the two countries.

Erdoğan also stressed the developing nature of the relations with Russia as the trade volume between the two countries is in a good position and always constantly improving. "However, we do have some difficult moments from time to time in our relations due to the developments in Syria in our efforts to make the situation better over there. But we can make up for this immediately with the steps we have taken, both personally, by the minister of defense, and by the minister of foreign affairs," he said.