US sanctions Turkey's Presidency of Defense Industries over S-400 purchase 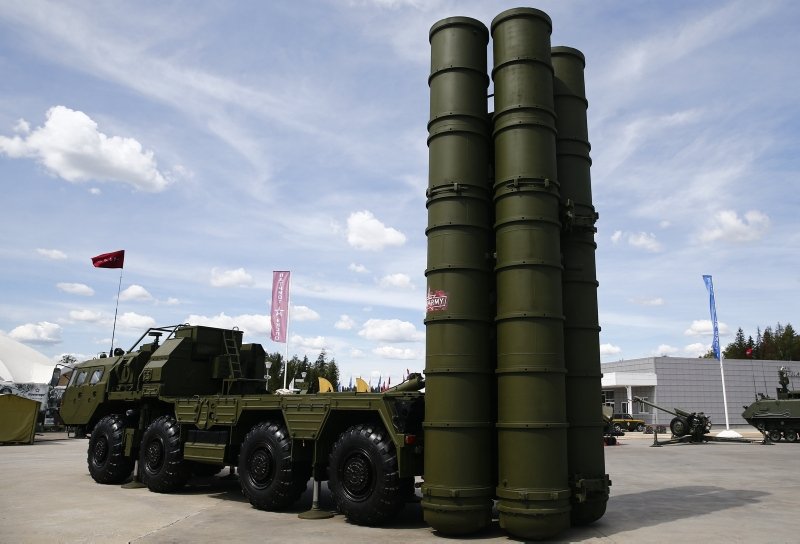 Sanctions were placed for the country's purchase of the Russian S-400 missile defense system.

The sanctions, announced at a delicate moment in the relations between the two NATO partners as President-elect Joe Biden prepares to take office, could affect contracts worth $1.5 billion to $2.3 billion, around 5% of U.S.-Turkish trade.

They do not cancel existing contracts or prevent either side from procuring vital defense needs, including parts for the U.S. F-35 stealth fighter still being produced in Turkey, or spare parts for Turkey's F-16 jets.

"The circumstances that led Turkey to purchase the S-400 missiles is known very well to everyone. In this respect, President Trump has also expressed Turkey's rightfulness multiple times," the foreign ministry statement said, rejecting the sanctions.

Underlining the baselessness of the U.S. claim that the S-400 missiles are not suitable with NATO systems, the statement added that Turkey has repeatedly offered to form a technical workgroup with NATO to handle the issue objectively and yet no steps have been taken on the matter.

"The U.S. preference of rejecting our offer to solve the issue through diplomacy and imposing one-sided sanctions instead is an inexplicable act," the statement added and highlighted: "Turkey will take necessary steps against this move that will clearly harm bilateral ties."

The statement also urged the U.S. to step back and reevaluate its decision within the spirit of alliance.

The sanctions – through the U.S. Countering America's Adversaries Through Sanctions Act (CAATSA) designed to deter any country from agreeing to military deals with Russia – also restrict U.S. loans and credits to the Presidency of Defense Industries, although that is not seen as having a significant impact.

The sanctions law, which U.S. President Donald Trump signed in 2017, mandates that the president choose five out of a choice of 12 sanctions, from banning visas and denying access to the U.S.-based Export-Import Bank to harsher options such as barring transactions with the U.S. financial system and denying export licenses.

"Under the leadership of President Recep Tayyip Erdoğan, we are determined in our aim toward a fully independent defense industry. Any decision that targets me and our institution abroad would not change my or my team's stance. It would not stop the Turkish Defense Ministry in any shape or form," Demir, the main victim of the sanctions, initially said on his official Twitter account Monday.

On Tuesday, Demir released another series of statements, expressing that in his opinion, Turkey-U.S. ties will survive this obstacle.

"We expect this will not influence our relations much," he said and continued: "We are NATO allies. As they themselves said, there is cooperation with Turkey in many areas. We and they expect this to continue."

"We will find remedies for this in our own circles. From our point of view, the issue of developing domestic industry will continue, maybe more quickly," Demir added.

Monday's move was the first time the United States deployed CAATSA legislation against a NATO partner and comes as Washington seeks to discourage other countries including its Middle East ally Egypt from buying Russian military equipment.

Russian media have reported that Cairo signed a $2 billion deal with Moscow to buy more than 20 Sukhoi SU-35 fighter jets.

Defense Minister Hulusi Akar also condemned the move on Tuesday, saying that the U.S. decision to sanction Turkey has shaken all values of an alliance between Washington and Ankara.

"As Turkey faces serious air, missile threats, it is taking all necessary measures to protect itself, its people," Akar said.

"The decision by the United States to sanction Turkey over its purchase of the S-400 air defense system is unreasonable, fruitless, and ultimately incompatible with the spirit of our partnership," Turkey's Communications Director Fahrettin Altun said from his Twitter account while Presidential Spokesperson Ibrahim Kalın expressed: "Sanctions against Turkey and the narrow agenda behind them are counterproductive and will have the reverse effect. They will not change Turkey’s resolve to develop its own defense industry capacities, diversify its sources, decrease dependency, and increase self-sufficiency."

Ankara has repeatedly stressed it was the U.S.' refusal to sell Patriots that led it to seek other sellers, adding that Russia had offered a better deal, including technology transfers. Turkey even proposed setting up a commission to clarify any technical issues. During a visit to Washington last November, President Recep Tayyip Erdoğan met his U.S. counterpart Donald Trump and agreed on setting up a working group.

Turkey has been a member of the NATO alliance for nearly 70 years.

The U.S. decision also drew criticism from Turkey’s opposition parties. Ünal Çeviköz, Istanbul deputy of the main opposition Republican People's Party (CHP) and speaker of Parliament’s Foreign Affairs Commission, stated on Tuesday that the CHP is deeply concerned about the sanctions decision and condemned it.

“The purchase of S-400s, which is the reason behind the relevant sanctions, is Turkey’s sovereign decision. Therefore, by no means do we accept the sanctions,” he stated on Twitter, urging dialogue with Washington.

Good Party (IP), on the other hand, labeled the move as "unacceptable" since it targets Turkey's sovereignty rights.

Ahmet Davutoğlu, a former prime minister and the current chairperson of the Future Party (GP), also condemned the decision, saying it will “harm Turkey-U.S. relations as well as the notion of an alliance.”

The sanctions caused reactions not only in Turkey but also abroad, as Turkey's other allies pointed at the unfairness of the U.S.' recent decision.

The initial foreign response came from Russia, as Russian Foreign Minister Sergey Lavrov said "the U.S. sanctions on Turkey is yet another reflection of the country's arrogant stance toward international law."

Such an approach does nothing for the credibility of the U.S. as a responsible participant in the international arena, including military-technical cooperation, Lavrov added at a news conference in Bosnia and Herzegovina's capital Sarajevo.

"U.S. addiction to sanctions and contempt for international law at full display again. We strongly condemn recent U.S. sanctions against Turkey and stand with its people and government," Zarif said on Twitter on Tuesday. He shared the tweet with the hashtag #Neighborsfirst.

Azerbaijan also expressed its support to Turkey after the U.S.' announcement. "We condemn the U.S. decision on unilateral sanctions against Turkey, for acquisition of S-400 air defence systems," Azerbaijani Foreign Ministry's spokesperson Leyla Abdullayeva said in a statement on Twitter. "Azerbaijan stands next to Turkey, and has always supported the just position of Turkey, which is based on international law. Immediate steps to settle the issue via dialogue is needed," she added.