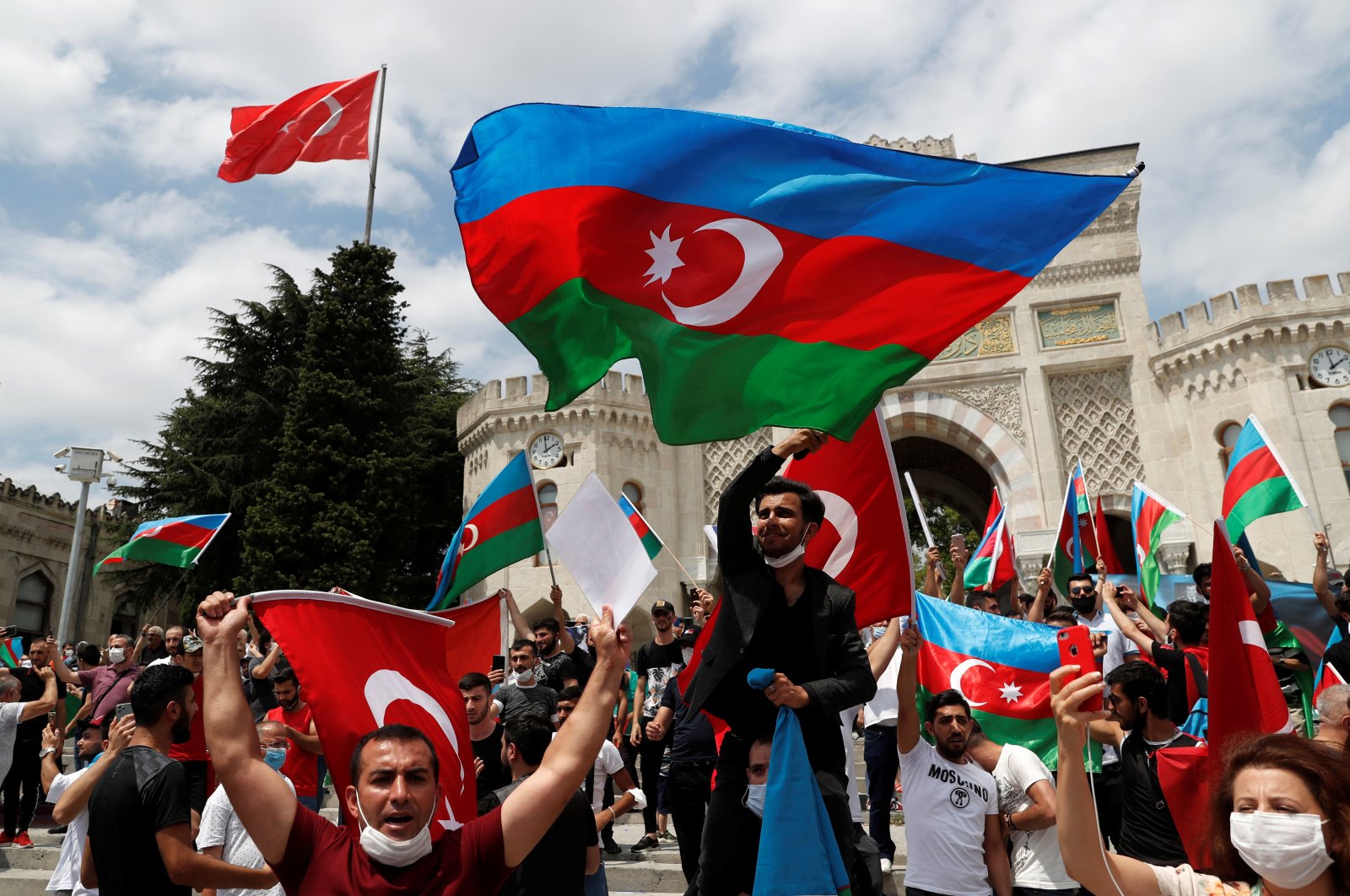 Azerbaijani men living in Turkey wave flags of Turkey and Azerbaijan during a protest following clashes between Azerbaijan and Armenia, in Istanbul, Turkey, July 19, 2020. (Reuters Photo)
by DAILY SABAH Jul 23, 2020 11:58 am
Edited By Sinan Öztürk
RECOMMENDED

The European Union’s foreign policy chief Josep Borrell on Wednesday held a three-way phone call with his Azerbaijani and Armenian counterparts to discuss the latest armed confrontations in the border zone between the two former Soviet countries, while United Nations Secretary-General Antonio Guterres on the same day called for "immediate and full de-escalation" and "a return to negotiations.”

It was the first time that Borrell talked simultaneously with the newly appointed Azerbaijani Foreign Minister Jeyhun Bayramov and Zohrab Mnatsakanyan, the chief of Armenian diplomacy. The top EU diplomat urged both sides to stop the armed confrontation and to reaffirm their commitment to a cease-fire.

According to the EU foreign policy chief, Azerbaijan and Armenia should take advantage of the dispute settlement mechanism of the Organization for Security and Co-operation in Europe (OSCE).

At the same time, Borrell showed commitment to continue talks with the two parties and tasked the EU's Special Representative for the South Caucasus to support the process.

However, Baku frequently expressed its pessimism regarding negotiations on conflict resolution. It called on the international community to demand that Armenia stop these kinds of unprovoked attacks “against the sovereign borders of another country” and respect the will of the people of Azerbaijan.

Skirmishes on the front line between the two South Caucasus nations began on July 12. Azerbaijan said it had lost 11 servicemen and one civilian in three days of fighting. Tovuz, a strategic region in terms of energy, has become a new flashpoint in the Azerbaijan-Armenia conflict that has been ongoing over the Nagorno-Karabakh region.

Four U.N. Security Council and two U.N. General Assembly resolutions, as well as decisions by many international organizations, demand the withdrawal of the occupational Armenian forces from Nagorno-Karabakh and seven other occupied regions of Azerbaijan.

The current skirmishes appear to be the most serious spike in hostilities since 2016 when scores were killed in four days of fighting.

In the face of the recent developments and heightening tension, Guterres spoke by telephone separately with Azerbaijan President Ilham Aliyev and Armenian Prime Minister Nikol Pashinian. He expressed his concern to them after the recent fighting, and asked them to refrain "from provocative rhetoric," a U.N. spokesman said.

Guterres also expressed his "full support" for the efforts of the OSCE to ease tensions between the two countries.

However, the organization’s Minsk Group, with the U.S., France and Russia as its co-chairs, have not been able to solve the conflict for almost 30 years. The Minsk Group was created in 1992 to encourage a peaceful, negotiated resolution to the conflict between Azerbaijan and Armenia over Nagorno-Karabakh.