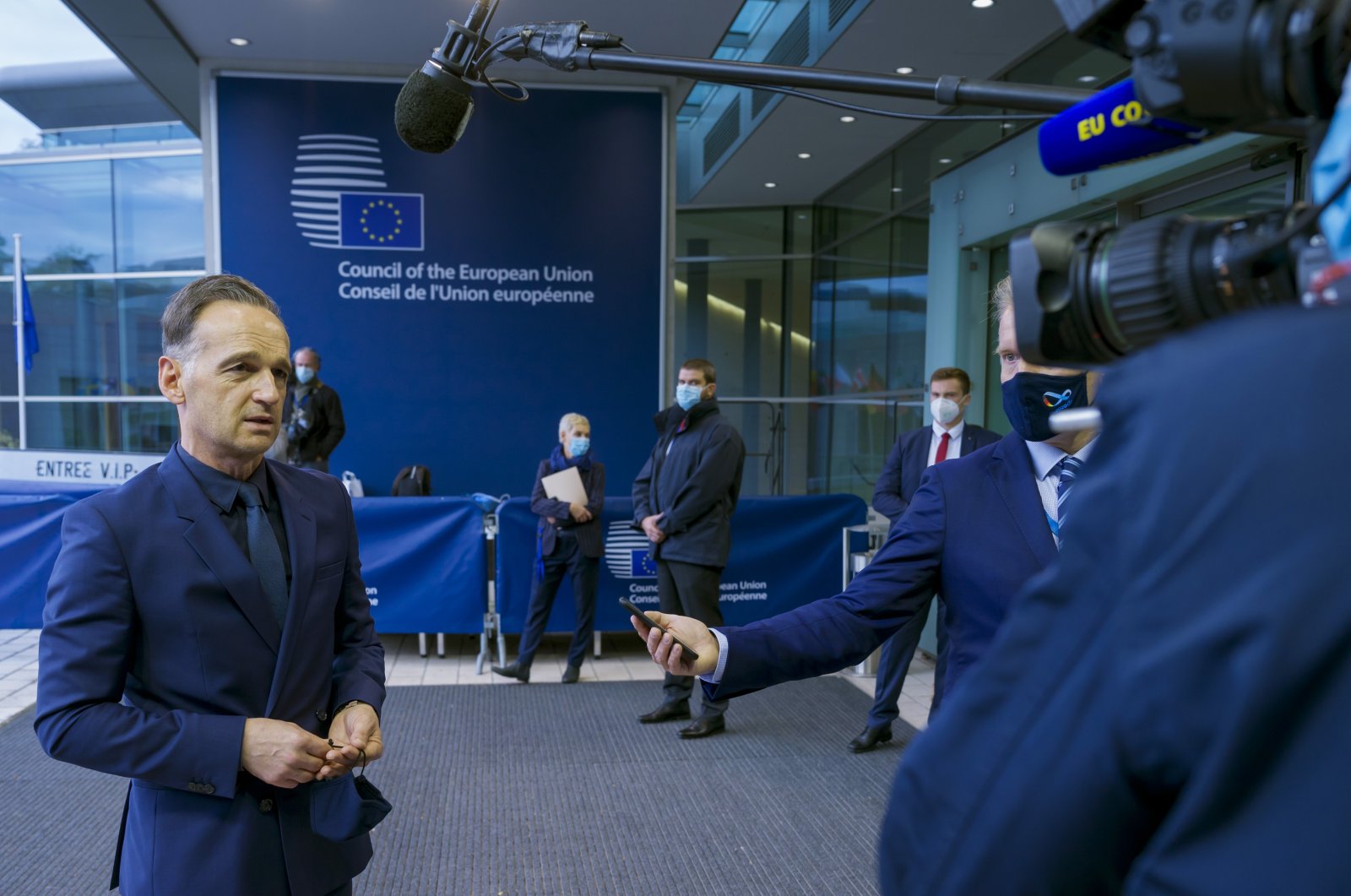 Germany's Foreign Minister Heiko Maas speaks with the media as he arrives for a meeting of European Union foreign ministers at the European Council building in Luxembourg, Oct. 12, 2020. (AP Photo)
by Daily Sabah with Agencies Oct 15, 2020 11:01 am

The European Union is unlikely to launch sanctions against Turkey at its summit starting Thursday amid a dispute in the Eastern Mediterranean over drilling activities and maritime zones with Greece, a German government source said.

Greece had requested to raise the issue at the two-day meeting of EU leaders in Brussels, the person told Reuters news agency in Berlin on Wednesday.

Germany does not expect the EU to change its stance on sanctions against Turkey a mere two weeks after the last summit's decision not to impose punitive measures until further notice.

Asked about the possibility of bringing forward EU sanctions, German Foreign Minister Heiko Maas said Thursday the bloc would wait a week to decide how to react.

"It's been twice that expected discussions have not taken place, and we don't know when they will happen," he said. "We must wait to see if there is progress in a week and then we'll see what attitude needs to be adopted by the EU."

"It's clear to us that Turkey is permanently carrying out provocative acts which are unacceptable," France's Foreign Minister Jean-Yves Le Drian told a news conference alongside his German and Polish counterparts.

He said the ball was in Ankara's court, but that the EU was ready to change the balance of power if Turkey didn't return to dialogue.

Earlier this week, Greek Prime Minister Kyriakos Mitsotakis said he would bring the Eastern Mediterranean crisis with Turkey on the agenda of the EU Council meeting scheduled for Oct. 15-16, as he said Ankara would have to face consequences if it does not stop “provocations.”

Mitsotakis was referring to a new navigational telex (Navtex) issued by Turkey, which said Turkish seismic exploration vessel Oruç Reis would carry out activities in the Eastern Mediterranean south of the island of Kastellorizo (Megisti-Meis) until Oct. 22.

He discussed the development on the phone with European Council President Charles Michel, saying he would bring it up at the next council meeting on Oct. 15-16.

“This new unilateral act is a severe escalation on Turkey’s part,” a government statement quoted Mitsotakis as saying.

Turkey said Greek objections were “unacceptable,” insisting that the research vessel was operating within Turkey's continental shelf – in an area just 15 kilometers (nearly 10 miles) from the Turkish coast and 425 kilometers (about 265 miles) from mainland Greece.

Turkey had announced last month that it was pulling the Oruç Reis to shore for maintenance and resupply, saying the move would give “diplomacy a chance.”

“Our expectation from Greece is for it to withdraw its maximalist claims that are contrary to international law ... put an end to its exercises and military activities that increase tensions in the Aegean and the Mediterranean and to enter into a sincere dialogue with us,” the Turkish Foreign Ministry said.

Turkish Presidential Communications Director Fahrettin Altun tweeted that while Ankara favored dialogue, "there can be no negotiations if you say 'what’s mine is mine and what’s yours is negotiable.'"

Ankara and Athens had agreed earlier this month, under NATO auspices, to set up a system to avoid potential military conflicts and accidents, including a hotline. The two countries had also agreed to resume so-called exploratory talks aimed at building confidence and resolving disputes, last held in 2016.

Turkey’s Foreign Ministry accused Greece of “insincerity” for what it said were Athens’ continued actions to raise tension while declaring itself to be ready for a dialogue. A ministry statement accused Greece of declaring military exercises in the Aegean Sea to coincide with Turkey’s Oct. 29 national day celebrations. Turkey retaliated by declaring exercises on Oct. 28 – a Greek national holiday.

The 27 EU leaders met Thursday in Brussels to discuss particular issues like the COVID-19 pandemic and EU-Britain relations in the post-Brexit era. The first part of the day is expected to focus on Brexit while environmental and climate issues will be discussed later in the day. On the second day, the leaders will discuss foreign affairs, including issues like the Eastern Mediterranean, Nagorno-Karabakh and Russia.

Ahead of the meeting, the European Commission president left the EU leaders' summit after one of her team members tested positive for the coronavirus.

"I have just been informed that a member of my front office has tested positive to COVID-19 this morning. I myself have tested negative," Ursula von der Leyen said on Twitter.

"However as a precaution, I am immediately leaving the European Council to go into self-isolation," she added.

The leaders had met earlier this month to find ways of de-escalating tensions between Turkey and bloc members Greece and the Greek Cypriot administration.

German Chancellor Angela Merkel had reiterated her insistence on a diplomatic solution to the Eastern Mediterranean conflict during the last EU summit while Berlin’s government spokesperson last week stated that Merkel is working to improve relations between the EU and Turkey following a videoconference with President Recep Tayyip Erdoğan on Oct. 6.