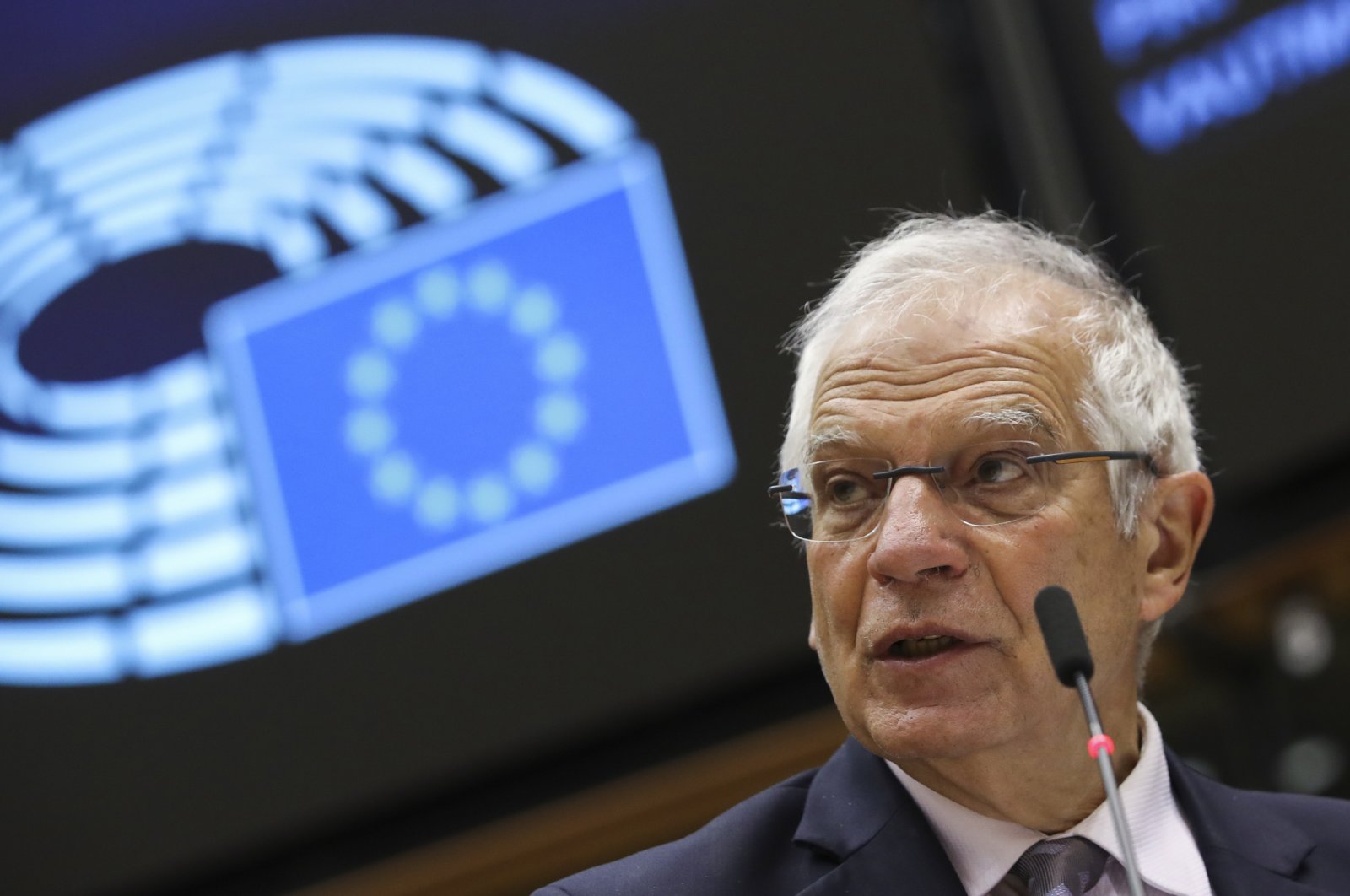 European Union foreign policy chief Josep Borrell addresses the European Parliament on relations with the U.S. during a plenary session, in Brussels, Nov. 11, 2020. (AP)
by DAILY SABAH WITH AGENCIES Nov 13, 2020 11:03 am
RECOMMENDED

The European Union on Thursday called on Azerbaijan and Armenia to implement the cease-fire agreement which is intended to settle the Nagorno-Karabakh conflict.

The EU High Representative for Foreign Affairs and Security Policy, Josep Borrell, spoke separately by phone with the foreign ministers of the two countries, according to a statement by his office.

Borrell, who is also the vice president of the European Commission, "expressed the hope that the cessation of hostilities will enable efforts toward a lasting peaceful resolution of the conflict and will prevent further human suffering" in both calls, it said.

"He highlighted that the EU stands ready to provide further humanitarian assistance to address the needs of the civilian populations affected by the conflict," the statement said.

"First and foremost, the cease-fire must be fully respected and implemented by both sides," Borrell said, adding the deal "can constitute a first step toward a negotiated, comprehensive and sustainable settlement of the conflict."

He also stressed the EU's commitment to continue to support the Minsk Group co-chairs-led format and noted that the bloc is ready to contribute to the group's efforts to establish lasting peace. The Minsk Group was set up by the Organization for Security and Co-operation in Europe (OSCE).

"The High Representative/Vice-President looked forward to remaining in contact with both ministers in the coming weeks, ahead of the upcoming EU-Armenia Partnership Council and EU-Azerbaijan Cooperation Council," the statement said.

Relations between Armenia and Azerbaijan have been tense since 1991 when the Armenian military occupied Nagorno-Karabakh, a territory recognized internationally as part of Azerbaijan.

Baku liberated several cities and nearly 300 of its settlements and villages from Armenian occupation during that time. On Nov. 10, the two countries signed a Russia-brokered agreement to end fighting and work toward a comprehensive solution to the conflict.

Meanwhile, France on Thursday said it was ready to help build a lasting and balanced solution for all sides in the Nagorno-Karabakh conflict, after finally acknowledging that the side it supports, Armenia, has failed.

The arrival of the peacekeepers on Tuesday to oversee the cease-fire between Azerbaijani troops and Armenian forces in the enclave extends Russia’s military footprint among the former Soviet republics it views as its strategic backyard.

Although Washington and Paris are co-chairing at the Minsk Group with Moscow, they were not involved in the deal signed by Russia, Armenia and Azerbaijan to end six weeks of fighting over the enclave.

France’s population includes between 400,000 to 600,000 people of Armenian origin, and President Emmanuel Macron has been openly backing Armenia since the very beginning of the conflict. However, still, he has increasingly come under fire from opponents at home, who argue that he did not do enough to help Yerevan.

Following the agreement, the French media said the Nagorno-Karabakh issue constituted yet another failure for pro-Armenian, anti-Turkish France following failures in Syria and Libya.

The French daily L’Opinion said Tuesday that the cease-fire agreement and joint declaration manifested a heavy defeat for Armenia.

Underlining Turkish support to Azerbaijan and constant communication between President Recep Tayyip Erdoğan and Russian President Vladimir Putin, the daily claimed the West, including France and the U.S., was excluded from the “diplomatic game.”

In a statement on Thursday, Macron’s office said he had sought to reassure Armenian Prime Minister Nikol Pashinian.

Macron had also convened a meeting of aid agencies and key members of the diaspora to assess Armenia’s humanitarian needs.

However, the statement appeared to stop short of comments earlier this week in which the president had been cautious about the Russian-brokered deal and said any lasting agreement needed to take into consideration the interests of Armenia.

France and the United States are expected to send diplomats to Moscow soon to discuss the conflict.

Previously, Britain also welcomed the “agreement by Azerbaijan & Armenia to end the #NagornoKarabakh conflict,” Foreign Secretary Dominic Raab wrote on Twitter Tuesday. The U.N. chief Antonio Guterres’ spokesperson Stephane Dujarric had said on Tuesday “the secretary-general is relieved that the deal has been agreed to a cessation of hostilities. The sense of relief is really about the hope that this will end the suffering of civilians.”

The U.S. State Department also said Washington was “happy to see an end to the violence” but “will be interested in learning more about the details and plans for implementation of this new arrangement.”