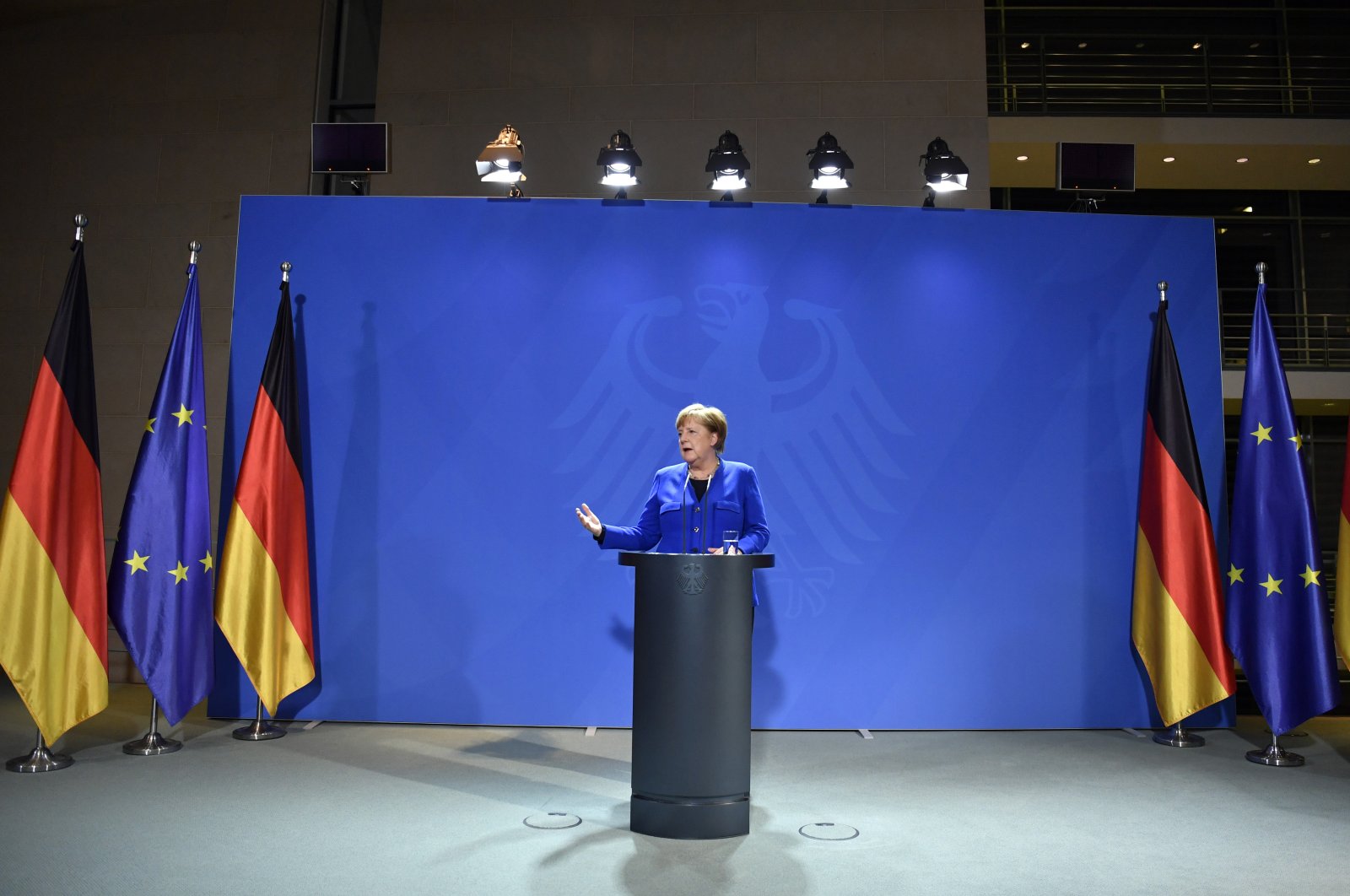 German Chancellor Angela Merkel makes a press statement on the spread of the new coronavirus at the Chancellery, in Berlin, Tuesday, March 17, 2020. (AP Photo)
by Anadolu Agency Mar 18, 2020 8:57 am
Edited By Eralp Yarar
RECOMMENDED

German Chancellor Angela Merkel on Tuesday pledged support for refugees in Idlib and underlined the need for a sustainable cease-fire and a political solution to the conflict in Syria.

"Germany has earmarked 25 million euros ($27,498) plus 100 million euros ($109,994) for humanitarian assistance, and this must now quickly reach the people," she said, referring to millions of displaced Syrians who moved near the Turkish border due to intense attacks by the Bashar Assad regime in recent months.

The German chancellor praised the March 5 agreement between Turkey and Russia to restore a fragile cease-fire in Idlib, after weekslong clashes between the conflict parties.

"We very much welcome a temporary cease-fire," Merkel said, but she also underlined the need for a sustainable cease-fire and steps to revive the talks for a political solution to the conflict.

Merkel said the leaders also discussed the migration issues and the 2016 EU-Turkey migrant agreement during the video conference call.

"We have expressed our willingness to offer more financial support if necessary," she said, adding that they were also aware of Ankara's expectations for upgrading the EU-Turkey Customs Union.

The EU-Turkey agreement has been successful in stemming refugee flows in recent years, but the EU's reluctance to take in refugees from Turkey and bureaucratic hurdles in transferring promised funds for refugees have led to sharp criticism from Turkish politicians.

Ankara also criticized its European partners for not fully implementing the 2016 agreement and backing away from their political commitments, including negotiations on upgrading the Customs Union.

Macron's office said there was a convergence of views on the situation in Idlib and the need to step up humanitarian aid to civilians during the conference that lasted about an hour.

But on the migrant issue, NATO and EU relations, "a number of clarifications have been requested by Europeans from Erdoğan in order to achieve clearer and peaceful relations," the Elysee Palace said.

The four leaders discussed the refugee crisis and the situation in Syria's opposition enclave of Idlib during a four-way video conference, following Ankara's decision last month to open its border to refugees and migrants trying to reach Europe.

The move sparked tensions with Brussels and with neighboring Greece when thousands of asylum-seekers, refugees and migrants amassed on the Turkish-Greek border.

"Humanitarian assistance for Idlib, and the refugee issue" were on the agenda, according to the Turkish presidency, along with other issues such as fighting in Libya.

Turkey's decision to open the gates for refugees heading to Europe came after more than 50 Turkish troops were killed by Syrian regime fire in the northwestern province of Idlib in February.

Turkey is home to nearly 3.7 million Syrian refugees and is demanding more assistance from the European Union amid fears of another influx from Idlib, where the Syrian regime has launched an offensive backed by Russian airpower. Ankara says it cannot absorb another refugee wave.

Ankara hopes for progress on a new migrant deal with Brussels by the next scheduled EU summit on March 26.

Because of the growing spread of COVID-19, the meeting was held via video conference rather than in person in Istanbul.