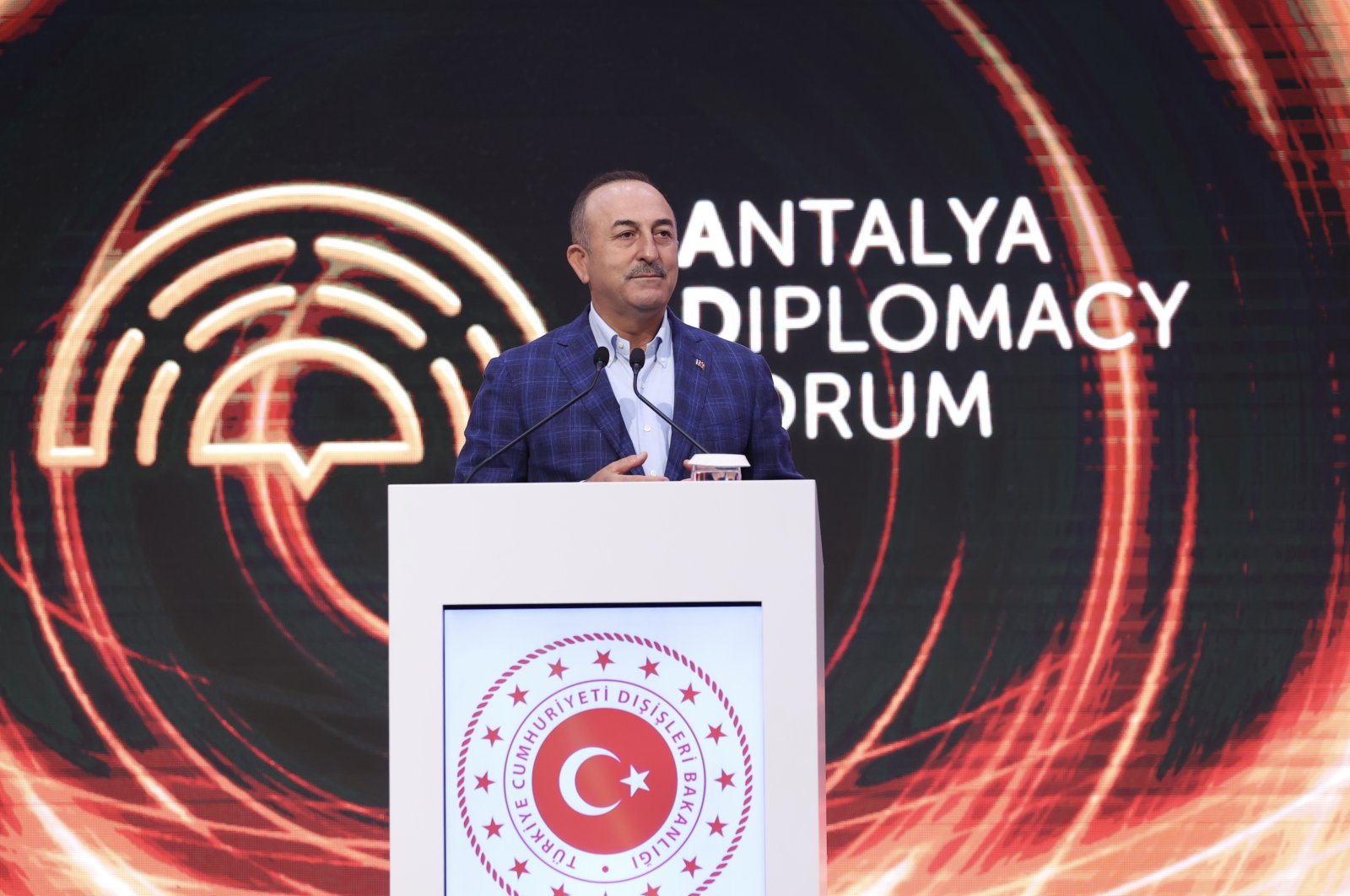 Greece must halt its provocations for relations to grow and to avoid further escalation, Foreign Minister Mevlüt Çavuşoğlu stated on Sunday, speaking on the bilateral ties between the two neighbors that have become tense due to conflicts concerning drilling rights and maritime borders in the Eastern Mediterranean.

Addressing reporters during the last day of the Antalya Diplomacy Forum, Çavuşoğlu stated that there was a gentleman's agreement not to hold any exercises in the Aegean during the tourism season in the summer. He said: "Greece is now declaring NAVTEX. We had an agreement not to hold NAVTEX and exercises on national days as well. Greece broke this as well. They should give up these provocations."

When asked about the state of relations between Turkey and Greece, Çavuşoğlu said that a dialogue between the two countries was opened after tensions rose in the Aegean and Eastern Mediterranean. Explaining that the consultations between the countries have resumed and that confidence-building talks are being held, Çavuşoğlu continued: "Greek Foreign Minister Nikos Dendias came. I went there. President Recep Tayyip Erdoğan and Greek Prime Minister Kiriakos Mitsotakis met in Brussels. The meeting went well. Have all the problems been resolved? No."

"These talks show our determination to solve our problems through dialogue. This determination and sincerity will continue. Greece needs to give up provocations. We go to the press conferences and everything is fine, but then my friend Dendias says many things behind our back. There is no need for this. We ignore it," he added.

Calling on Greece to stick to international agreements, Çavuşoğlu said: "We need to give up provocative steps and provocation. I know that they are trying to satisfy their own people because there is a lot of pressure on them. We want to turn the dialogue we started into concrete steps. We are sincere and determined."

Greece did not join the forum because of the participation of the Turkish Republic of Northern Cyprus (TRNC), Çavuşoğlu noted. Former European commissioner Dimitris Avramopoulos and Theodora Bakoyannis – both former Greek foreign ministers – were originally scheduled to attend but neither participated in the forum.

Çavuşoğlu also said that ahead of the forum, the Greek Cypriot administration called countries, telling them not to participate.

Cooperation among countries in the Eastern Mediterranean cannot be achieved without the participation of Turkey and the TRNC, the Turkish Foreign Ministry also said Tuesday in response to a recent Mediterranean conference held in Athens.

Speaking at his closing speech of the three-day high-level event, he said it became one of the first and biggest international events during the pandemic and it was held under compliance with all health measures.

"I think it will be a model for events of this scale in the future," Çavuşoğlu added.

Thanking all participants "who enriched this forum with different perspectives," he said: "Our goal during the forum was not to repeat the spoken words, not to repeat what is known. We wanted to go beyond our 'speech notes' in terms of diplomacy."

Antalya Diplomacy Forum has seen a high turnout from the leaders and foreign ministers of different countries, with Çavuşoğlu holding more than 50 bilateral meetings. A total of 11 heads of state and government, 45 foreign ministers, and attendance at ministerial level were part of the forum, according to the minister.

"This means that one out of every five foreign ministers in the world was here," he said.

Additionally, the event was attended by about 60 representatives of international organizations and high-level personalities, many Turkish and foreign guests from the business and academic world, and 256 young people in total, including undergraduate, graduate, and doctoral students from more than 50 universities.

Noting that today "most of the problems that occupy the global agenda are experienced in the Mediterranean Basin," where the forum took place, Çavuşoğlu said there is room for all voices and all ideas in the region.

"Today it is in our hands to turn the Mediterranean into a sea of ​​friendship," he said. "For this, we need innovative diplomacy and new approaches."

Çavuşoğlu and President Recep Tayyip Erdoğan held more than 50 bilateral talks on the sidelines of the summit. Debates of global importance were analyzed in-depth during the forum, including the Balkans, the future of Europe, trans-Atlantic relations, refugees and migrants and the threat of terrorism. There was also a session on Turkey’s proposal for an Eastern Mediterranean conference.

The forum was held at a congress center constituting of 16,000 square meters and with all COVID-19 precautions. It is the first forum made internationally since the pandemic started. The forum was attended by more than 2,000 participants while around 8,000 COVID-19 tests were made daily. Within the scope of the forum, two dinners, a reception and three cultural events were organized.

The foreign ministry created a diplomacy tunnel at the congress center which displayed 85 issues including historical events and meetings in a six-minute loop. Participants of the forum voiced that they have been enjoying the forum and were pleased by the precautions taken. Ministers of various countries also used the forum to hold talks with their counterparts and engage in diplomacy on the sidelines.