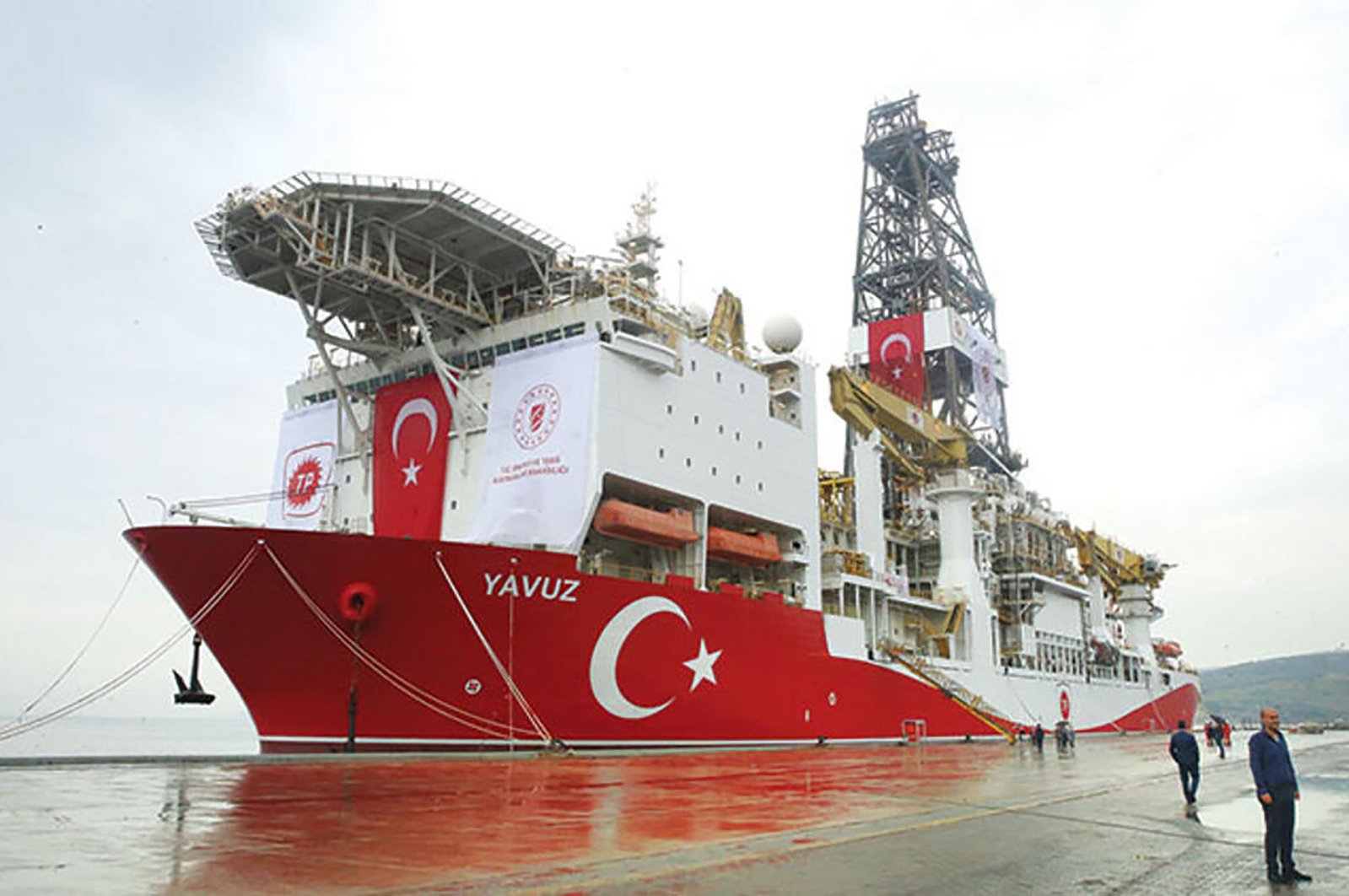 Yavuz drillship is one of the two drilling vessels of Turkey in the Eastern Mediterranean, asserting the rights of the country and the Northern Cyprus over the resources of the region. (SABAH)
by DAILY SABAH WITH AGENCIES Jun 12, 2020 12:46 pm

Despite employing reconciliatory rhetoric, Greece continues to confront Ankara on Turkey's most basic rights in the Eastern Mediterranean

Greece continues to fuel the tension with Turkey over the Eastern Mediterranean's natural gas resources by suggesting the two parties engage in '"dialogue" while still claiming Turkey's lawful acts in the region are "invalid."

Greek Prime Minister Kyriakos Mitsotakis claimed to be ready on Thursday to discuss the delimitation of maritime zones with Turkey.

"Greece is always open to a dialogue with Turkey to delimitate the maritime zones," Mitsotakis told an economic forum in the capital Athens.

"We can discuss (it) openly, and if we finally confirm that we cannot agree, there are always ways to refer the issue to the International Court (of Justice) in The Hague on how to solve the problem but always with absolute respect for international law," he said. Mitsotakis also claimed that it was not an era of "gunboat diplomacy" and such understandings belong to other centuries.

Noting that Ankara and Athens have "complex" relations, the prime minister, despite seeming to support reconciliatory rhetoric, still mentioned Turkey's maritime zone delimitation agreements with Libya, claiming they were "invalid."

Turkey and Libya signed two separate deals in November following a meeting between President Recep Tayyip Erdoğan and the head of the Presidential Council of Libya's U.N.-backed Government of National Accord (GNA), Fayez Sarraj, in Istanbul. One of the deals was critically important as it enabled Turkey to secure its rights in the Mediterranean while preventing any fait accompli by other regional states.

This deal brings a new perspective to Turkey's shoreline. With a three-dimensional viewpoint, it maximizes the country's maritime boundaries and shows that Turkey's border districts of Marmaris, Fethiye and Kaş are actually neighbors with Libya's Derna, Tobruk and Bardiya districts.

Mitsotakis also defended an accord his country signed recently with Italy on maritime boundaries to establish an exclusive economic zone (EEZ) between the two countries, stressing it was valid.

He said, "If Turkey attempts to violate our sovereign rights, it will see a response from not only Greece but also Europe."

He added that it was not the path he wished to follow, but "if such a thing happens, it will have serious consequences."

Greece on Tuesday signed a maritime border accord with Italy on the Ionian Sea.

"Today is a good day for Greece, Italy, Europe and the entire Mediterranean," Mitsotakis said in a statement following the deal.

"I hope that agreements of this kind can be concluded with other countries in the area," he added.

Although Turkey has merely pursued its international rights by making a deal with Libya, it has still received criticism, specifically from Greece and Greek Cypriots. Reacting to the deal, Greece claimed that the move was against international maritime law as well as the principles of good neighborly ties. The Greek Cypriot administration's foreign ministry also claimed that a memorandum of understanding signed between the two countries has no legal validity and can't undermine the rights of the island of Cyprus or other coastal states.

Yet, this criticism seems to only prevail when Turkey signs a maritime deal since Greece sees no problem in having similar deals with other regional actors.

For instance, Greek Foreign Minister Nikos Dendias said Tuesday: "Under international law, the delimitation of maritime zones is carried out through legal agreements, not baseless ones ... and certainly not through the one-sided submission of coordinates."

Earlier, Dendias claimed that the accord signed with Italian counterpart Luigi Di Maio confirms a 1977 continental shelf agreement with Rome "and the right of islands to have maritime zones."

Earlier this year Greece also signed an agreement with the Greek Cypriot administration and Israel on the Eastern Mediterranean for a huge pipeline project to ship gas to Europe.

According to the U.N. Convention on the Law of the Sea, while a country is able to stretch its territorial waters only 12 nautical miles out to sea, when it comes to the exclusive economic zone, where it has rights to fishing, mining and drilling, the area can extend for an additional 200 miles. However, if the maritime distance between the two countries is less than 424 miles, a bilateral deal is needed to determine a mutually agreed upon dividing line of their respective exclusive economic zones.
Greece, on the other hand, claims that the islands also have their own exclusive economic zones, and with this claim, it reduces Turkey's zone remarkably.

Last week, Turkey announced that it planned to start drilling for hydrocarbons in the Eastern Mediterranean in three or four months, a move Greece condemned as "illegal."

Since last spring, Ankara has sent two drilling vessels, Fatih and most recently Yavuz, to the Eastern Mediterranean, asserting the rights of Turkey and the Northern Cyprus over the resources of the region.

Athens and Greek Cypriots, once again, have opposed the move, threatening to arrest the ships' crews and enlisting EU leaders to join their criticism.

Although there are varying estimates, most figures suggest that the Eastern Mediterranean region has over 70 trillion cubic feet of natural gas, or approximately 1.5% of the overall natural gas reserves in the world. Most of this natural gas is found in the fields of the island of Cyprus' Glaucus, the Aphrodite and Calypso areas, Israel's Leviathan and Egypt's Zohr.

The reserves in the Eastern Mediterranean carry great importance, especially for Europe – the continent with the least natural gas reserves in the world – which is desperate to eliminate its dependence on Russia on the issue. So far, only 3.5 trillion cubic meters of natural gas reserves have been found in the Eastern Mediterranean and yet, this alone became enough for Europe to increase its hope, which led it to support the Greek Cypriot administration in its search.
However, Europe is not alone in its search for alternative natural gas resources as Turkey also has a major dependence on foreign states – particularly Russia, Iran and Azerbaijan – when it comes to energy and is seeking substitutes for its supply.
Yet, unlike Europe's ambitions, Turkey has the longest shoreline in the Eastern Mediterranean, making it a natural candidate for seeking reserves in the region in accordance with international law. The presence of the Turkish Cypriot government in Northern Cyprus also strengthens Turkey's hand as the country defends the rights of the Turkish Cypriots in the region and insists that their consent is needed for any type of drilling activities.

Turkey in favor of dialogue

Turkey's Foreign Ministry spokesman said Tuesday that the country is determined to "protect the rights of Turkey and Turkish Cypriots in the Eastern Mediterranean."

In a statement, Hami Aksoy said the Turkish Petroleum Corporation's recent application for a permit for additional oil exploration and drilling activities in the Eastern Mediterranean is within the boundaries of the U.N.'s continental shelf for Turkey.

Underlining that Turkey "will resolutely continue to exercise its sovereign rights in this area," Aksoy said the country's "seismic research and drilling activities are carried out according to the previously determined program."

Turkey has several times sought dialogue with Greece on these issues, but Athens has failed to respond, he added.

Despite the fact that Turkey has the longest shoreline in the region when it comes to the drilling activities, no country has felt the need to consult or engage in dialogue with Ankara on the issue. Still, until very recently, Ankara expressed willingness to establish communication channels with the various regional countries, and yet all its attempts fell flat with no response. Egypt even organized the Eastern Mediterranean Gas Forum last year, inviting all the regional countries – except for Turkey.

Before the coup took place in Egypt, Ankara and Cairo had planned to conduct joint naval maneuvers in the region. However, following the coup, as bilateral ties worsened, these plans were canceled when Egpyt replaced Turkey with Greece for joint activities.

As a matter of fact, the effects of poor bilateral ties have become a common pattern when it comes to Turkey's journey in the Eastern Mediterranean. For instance, since the beginning of the 2000s, regional countries began making deals with the Greek Cypriot administration, a country that Ankara does not recognize as a state, on the exclusive economic zones, which are all defined as unlawful by Turkey and were brought up to the U.N.

Still, Turkey has remained open to dialogue with Greece.

Turkey wants to solve all the problems in the Aegean Sea, the Eastern Mediterranean and Cyprus in accordance with international law, said the country's defense minister, Hulusi Akar.

Akar said: "Let's solve all the problems within the framework of good neighborly relations, based on mutual goodwill, respect, using peaceful means and without encroaching on anyone's rights."

He added: "In this context, a Turkish delegation went to Athens twice based on the agreement Turkey reached with Greece and a meeting was held there," referring to the previous dialogue attempts of Turkey, which have all failed due to Greece's uncooperative stance.