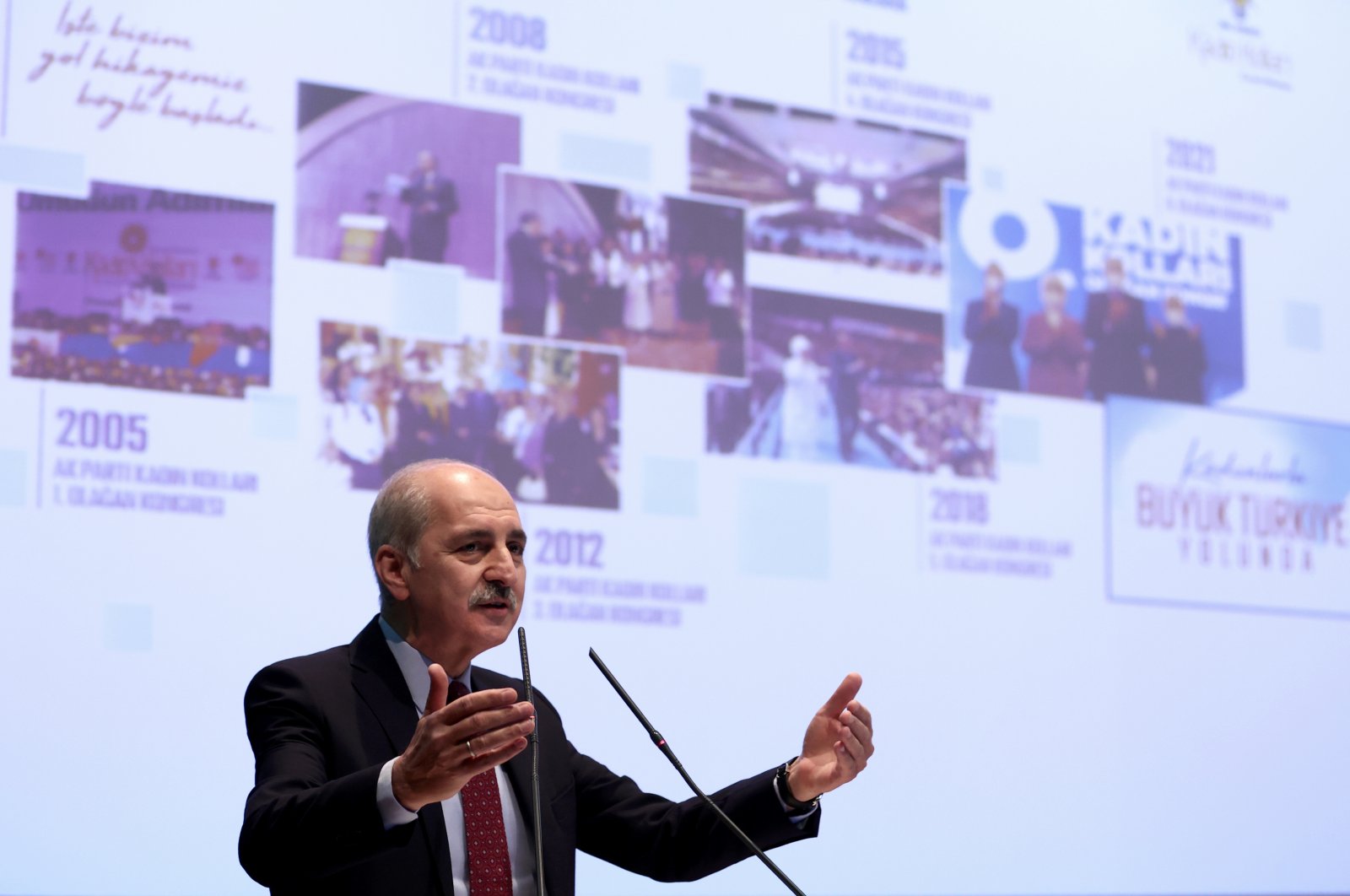 The ruling Justice and Development Party (AK Party) Deputy Chair Numan Kurtulmuş is seen during a speech at an event of his party's women branch in Ankara, Turkey, Nov. 22, 2021. (AA Photo)
by DAILY SABAH Nov 23, 2021 9:11 am
RECOMMENDED

Greece’s military drills as well as its provocative statements are not made solely on its own, but are spurred by some powers, the ruling Justice and Development Party (AK Party) Deputy Chair Numan Kurtulmuş said on Monday.

“The main issue here is the discomfort felt by Turkey’s strong presence in the Mediterranean,” Kurtulmuş said at a media workshop.

Most recently, Greece and the United States held a joint military drill in the Aegean amid rising tensions with Turkey.

The drill comes a week after President Recep Tayyip Erdoğan said that “Greece, as a whole, has turned into a U.S. military base.”

Underlining that Turkey will not give up upon its rights in the region and will continue its presence, Kurtulmuş said: "Since some people are uncomfortable with Turkey's existence they express their dissatisfaction with Turkey defending its sovereign rights in the Aegean and the Mediterranean, through the support they give to Greece, as they have done for Greece all along.”

Kurtulmuş said that Turkey’s agreement with Libya emphasized that Ankara will not give up its rights on the hydrocarbon resources in the Eastern Mediterranean.

The agreement also confirmed that Turkey and Libya are maritime neighbors. The delimitation starts from Turkey’s southwestern coast of Fethiye, Marmaris and Kaş, and extends to the Derna-Tobruk-Bardia coastline of Libya.

On the other side, another reason for tensions is the migration crisis in the region.

13 irregular migrants pushed back by Greece were rescued on Monday by the Turkish coast guard off western Izmir province’s Dikili and Aydın province’s Kuşadası districts.

The rescued migrants were taken to the provincial migration directorate.

Turkey's five Aegean provinces – Çanakkale, Balıkesir, Izmir, Muğla and Aydın – are prime spots for refugees leaving Turkey for the European Union, with the Greek islands lying within sight of the Turkish coast.

Turkey and Greece have been key transit points for migrants aiming to cross into Europe, fleeing war and persecution to start new lives. Turkey has accused Greece of large-scale pushbacks, summary deportations and denying migrants access to asylum procedures, in violation of international law. It also accuses the European Union of turning a blind eye to this blatant abuse of human rights.