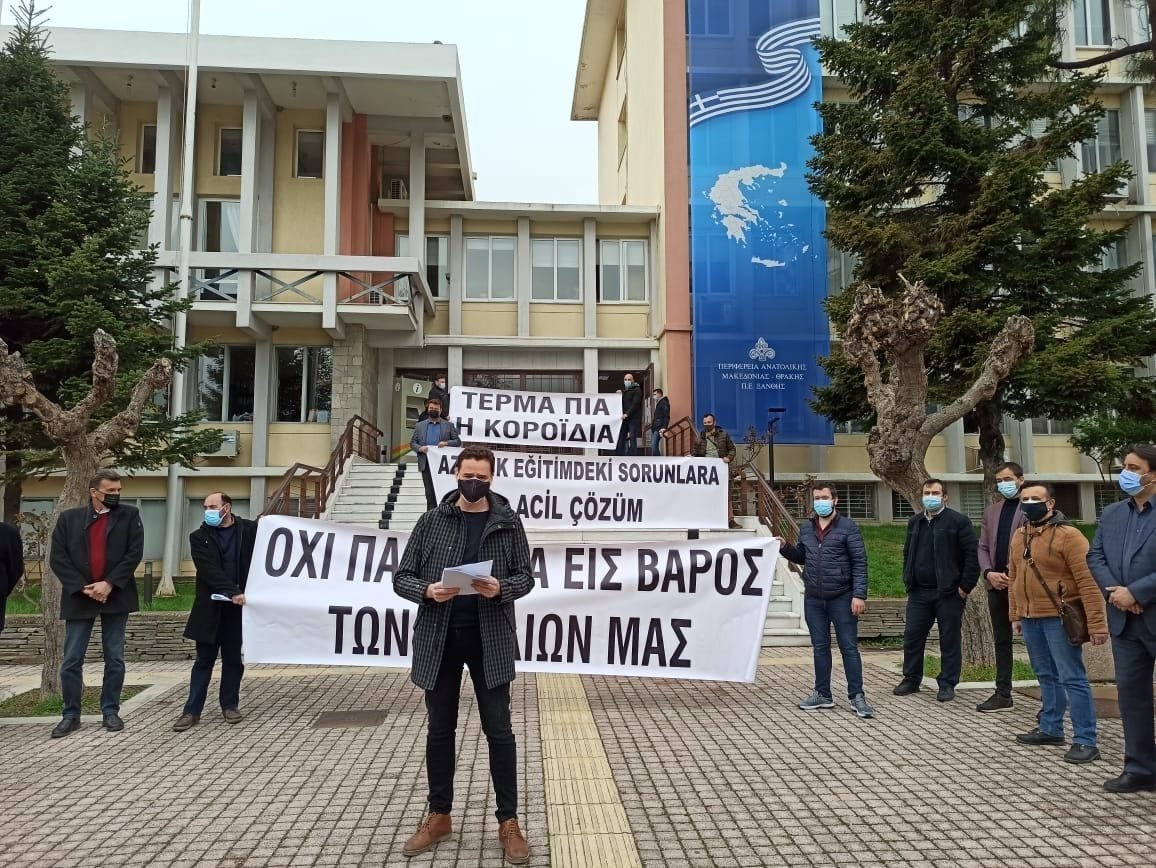 Parents and their supporters take part in a demonstration protesting the Greek government's postponement of community board member elections at minority schools in Komotini (Gümülcine), northern Greece, April 6, 2021. (AA Photo)
by DAILY SABAH WITH AA Dec 09, 2021 11:05 am
RECOMMENDED

A Greek court on Wednesday found an elected mufti of the country's 150,000-strong Muslim Turkish minority not guilty of overstepping his authority by carrying out his duties as a religious official.

Ibrahim Şerif, the elected mufti of Komotini (Gümülcine) in northeastern Greece, had been charged by Greek authorities in 2018 with usurping authority after attending a circumcision ceremony in 2016 and was to stand trial in the northern city of Thessaloniki on Thursday.

Speaking to Anadolu Agency (AA), Ercan Ahmet, Şerif’s lawyer, said that the prosecutor asked the court to acquit the mufti, saying there is insufficient evidence to convict.

Lawyers from the Istanbul, Turkey-based International Jurists Union and the second Istanbul Bar Association were also present in the court.

In a statement, they stressed that they are worried that the Turkish Muslim minority in Western Thrace are not able to exercise their rights under various bilateral and international treaties, including the 1923 Treaty of Lausanne.

"Furthermore, Greek doesn't respect decisions of the European Court of Human Rights (ECtHR) in favor of the Turkish Muslim minority," the statement said, adding that the European Parliament (EP) overlooks this illegal state of affairs.

Pointing to Turkey's constructive approach toward Greece, the statement called on Greek authorities to comply with the treaties and ECtHR rulings, and the EP to monitor minority-related developments in the country.

Turkey in June also condemned a recent Greek court decision to sentence the elected mufti of Iskeçe (Xanthi) in Greece’s Western Thrace to 15 months in prison, describing the decision as "another manifestation of the legal pressure and intimidation policies by Greece against the Western Thrace Turkish minority's elected muftis by their own will."

Turkey expressed hope for the "unfair decision" to be corrected in the later stages of the legal process.

"We invite Greece once again to put an end to its oppressive practices that violate the fundamental rights and freedoms of the Western Thrace Turkish Minority and its elected muftis," it added.

Dating back centuries, a population of 150,000 Muslim Turks lives mainly in the Komotini and Xanthi areas in Greece's Western Thrace region.

However, since 1991, the Greek state has refused to recognize the elected muftis, and authorities have even put clerics on trial for performing religious rites.

Turkey has long decried Greek violations of the rights of its Muslim and Turkish minority, from the closing down of mosques and letting historic mosques fall into disrepair, to refusing to allow local groups to use "Turkish" in their name.

These measures violate the 1923 Treaty of Lausanne, as well as ECtHR verdicts, making Greece a state that flouts the law, say Turkish officials.