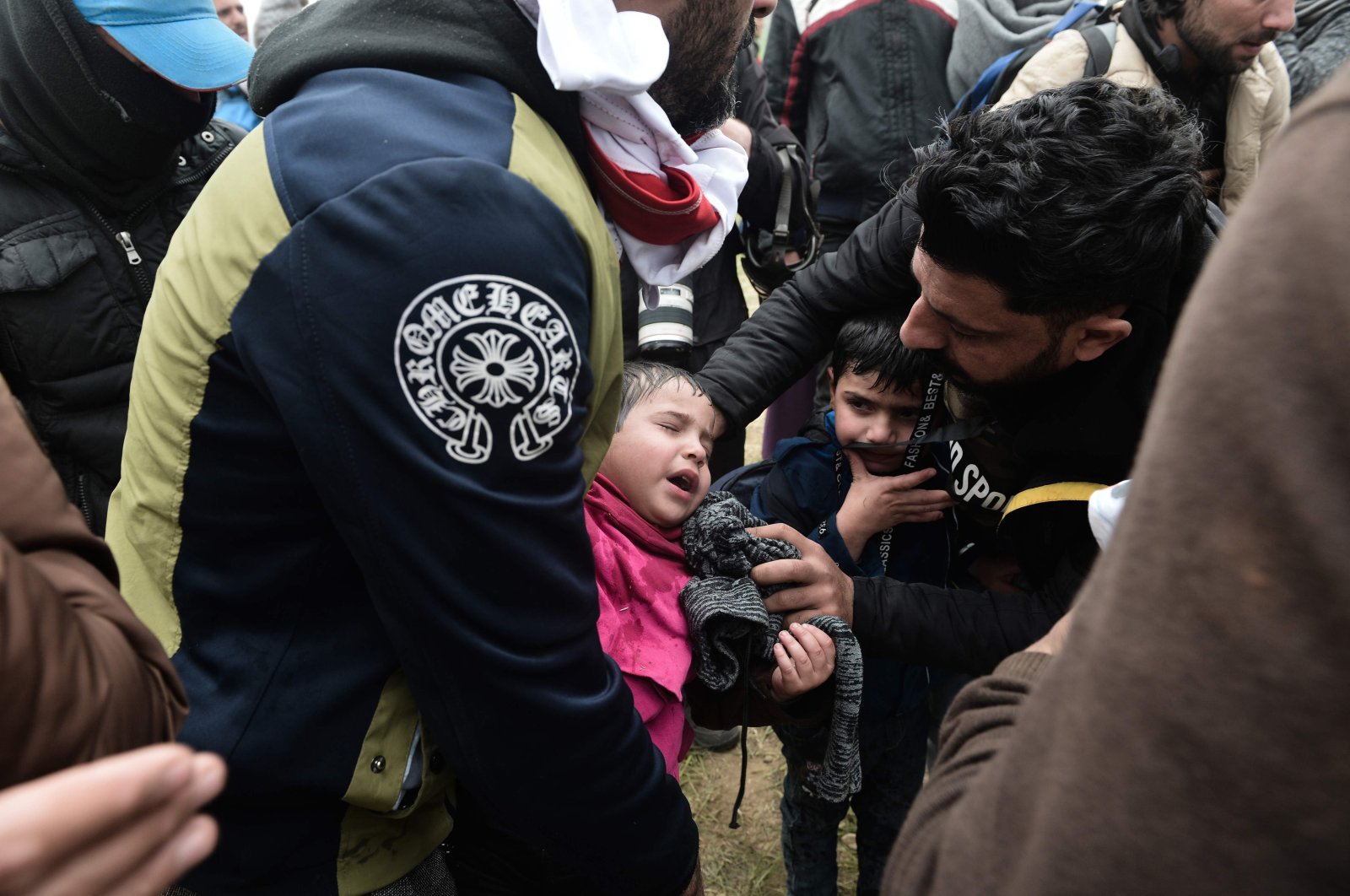 A child suffers from tear gas used by Greek riot police outside of a refugee camp in Diavata, a west suburb of Thessaloniki, where migrants gather on April 6, 2019. (AFP Photo)
by DAILY SABAH Apr 13, 2020 9:22 pm
RECOMMENDED

Turkish Foreign Ministry Spokesperson Hami Aksoy said in a statement released late Monday that Turkey was abiding by the March 18 refugee deal, in response to claims by Greece's immigration affairs minister accusing Turkey of using COVID-19 as an excuse to violate the agreement. Aksoy said those statements by the Greek minister were aimed at defecting from crimes committed by Greece against the migrants.

Notis Mitarakis, the Greek immigration affairs minister, claimed earlier in a report published by the Athens-based Ethos newspaper that Turkey was not abiding by the readmission agreement signed with the European Union and was not accepting refugees from Greece using the premise of the ongoing COVID-19 crisis.

"Turkey refuses to take back migrants, giving the coronavirus as an excuse," Mitarakis said.

Aksoy said in the statement that Turkey had fulfilled its obligations under the March 18 memorandum and thus the number of illegal crossings to Europe had decreased by 92%.

“It is the European Union that isn't fulfilling its obligations,” he added.

“Up to this date, 2,139 irregular migrants who have fallen in line with these conditions have been reaccepted from Greece,” he said.

Meanwhile, Aksoy said, measures had to be taken to protect public health and safety in light of the ongoing COVID-19 outbreak worldwide.

The EU has temporarily suspended its resettlement program, an important element of the March 18 agreement, in order to protect public health, he said, noting that Turkey had also temporarily suspended the readmission process for refugees on the same basis, having reported this to Greek authorities.

“Our suggestion to Greece is to take urgent measures in order to prevent a humanitarian disaster in the refugee camps due to the pandemic and to respect the right of refugees to live in good health,” Aksoy noted.

Authorities in Greece expressed concern Monday that migrants and refugees had been gathering on Turkey's coast with plans to cross the Aegean Sea to Greek islands despite movement restrictions in both countries to prevent the spread of the coronavirus.

Turkish authorities previously inhibited migration to Europe in return for Syrian refugee aid as part of a deal with the EU.

Thousands of migrants set up camp at Turkey's border with Greece after Ankara declared in late February that it would no longer stop them from going to Europe, accusing the EU of not upholding its part of a 2016 refugee deal.

Turkey's decision to open the border came after 34 Turkish soldiers were killed by forces of the Bashar Assad regime, in Idlib, northwestern Syria. Turkish soldiers had been stationed in the area to protect local civilians as part of a 2018 deal with Russia forbidding acts of aggression within a certain delineation.