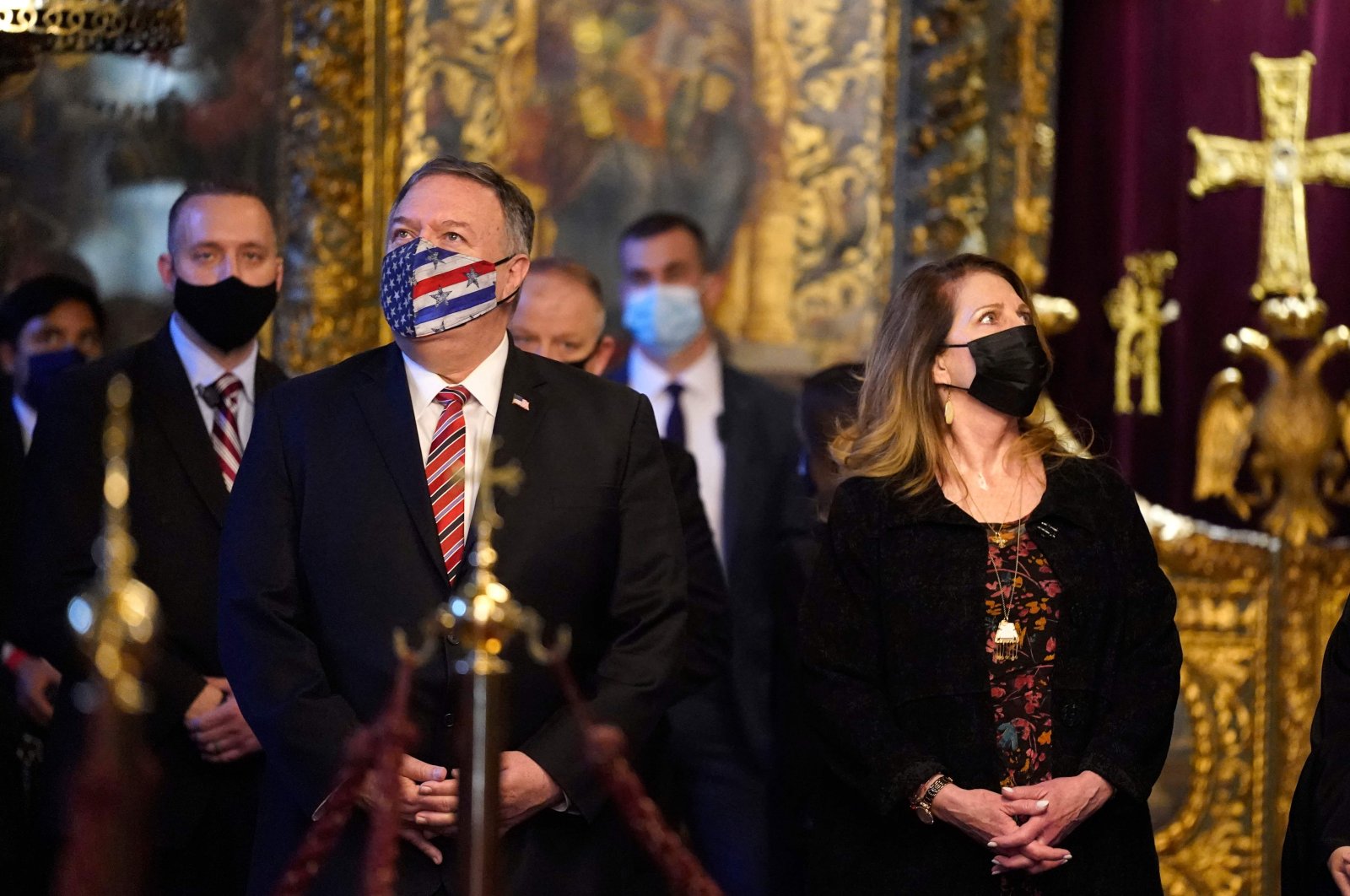 Visiting Istanbul with the sole purpose of meeting with the patriarch, Pompeo landed in Turkey’s commercial capital on Monday evening. The next morning, at about 10:40 a.m., he went directly to the patriarchate.

Having both private and delegation meetings with the patriarch, Pompeo spent about an hour and a half in the patriarchate.

Last week, Pompeo said during a briefing at the State Department that he would leave Friday for France and would then visit Turkey, Georgia, Israel, Qatar, the United Arab Emirates (UAE) and Saudi Arabia. “The conversations will differ obviously in each country, (with) many different things to cover, but I am sure many of them will focus on this administration’s historic efforts to forge peace and cooperation throughout the Middle East,” he said. Pompeo’s visit to Istanbul is his second stop after Paris.

Pompeo targeted Turkey in his visit to Paris Monday, calling on Europe to work jointly with the U.S. against Ankara’s actions in the Middle East over the past few months.

“France’s President Emmanuel Macron and I agree that Turkey’s recent actions have been very aggressive,” Pompeo was quoted as saying by French daily, Le Figaro, citing Turkey’s recent support to Azerbaijan in the Nagorno-Karabakh conflict with Armenia as well as military moves in Libya and the Eastern Mediterranean.

“Europe and the U.S. must work together to convince (Recep Tayyip) Erdoğan such actions are not in the interest of his people,” Pompeo said.

Pompeo also said increased use of Turkey’s military capability was a concern, but he did not say whether the country, which hosts U.S. military forces at its İncirlik Air Base, should stay in or quit the NATO.

NATO, founded in 1949 to contain a military threat from the Soviet Union, relies on U.S. military superiority to combat a host of threats on Europe’s borders, including a resurgent, nuclear-armed Russia and militant attacks. NATO also aims to guarantee the freedom and security of its members through political and military means.Turkey, which joined the military alliance among 29 North American and European countries in 1952, saw NATO membership as something that would make a positive contribution to the country’s economic, military and political development. Since then, Turkey has been a vital ally, providing NATO a connection to the East. Turkey attaches utmost importance to NATO’s role in maintaining security and stability in the Euro-Atlantic area.

In September, Pompeo came under fire by Turkey for visiting the Greek Cypriot administration on the heels of lifting the U.S. arms embargo on the administration. Turkey decried both moves, saying that Pompeo should also have visited the Turkish Republic of Northern Cyprus (TRNC) and that lifting the arms embargo only raised tensions in the region.

The visits come more than a week after the U.S. presidential election saw Democrat Joe Biden defeat President Donald Trump in the race for the White House.