Int’l community must demand Armenia back down in Karabakh: Azerbaijani envoy 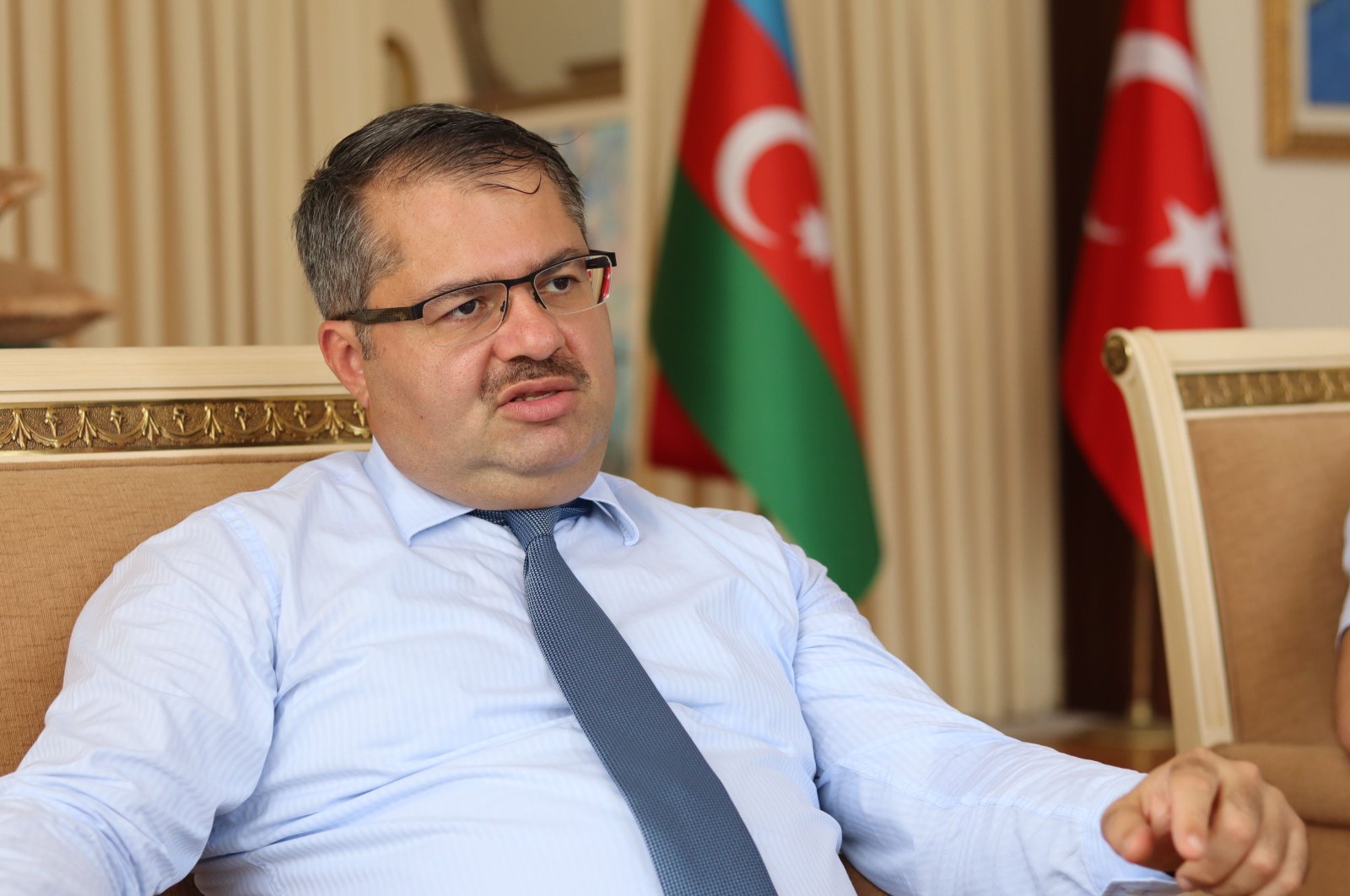 As fighting reignited on the frontline between Baku and Yerevan, thousands of people poured into the streets of Azerbaijan demanding the restoration of their country's territorial integrity. Baku's envoy to Turkey Khazar Ibrahim underlined that the people's demand will be heard

Fighting between Azerbaijani and Armenian forces flared up again recently constituting the worst outbreak of hostilities between the two countries in years. Azerbaijan's Ambassador to Turkey Khazar Ibrahim called on the international community to enforce and demand that Armenia stop these kinds of unprovoked attacks “against the sovereign borders of another country” and respect the will of the people of Azerbaijan.

Skirmishes on the frontline between the two South Caucasus nations began Sunday. Azerbaijan said it has lost 11 servicemen and one civilian in three days of fighting. Even though a relative calm could be observed since then, the envoy in an exclusive interview to Daily Sabah expressed that he is not convinced the calm will prevail since the previous attacks were “absolutely unprovoked.”

“It was unnecessary not only for the regional stability but also for Armenia’s own interest. They knew that we never leave any attacks unanswered, and they ignored not only the lives of our civilians and servicemen, they also ignored the lives of their own people,” Ibrahim elaborated, saying that the Armenian side had more than 100 casualties.

The envoy stated that in the last few days no large-scale provocations were observed, “yet provocations did not only happen in the Tovuz region, now they have also started shooting civilian, not military installations.”

Tovuz has been the new hot spot in the Azerbaijan-Armenia conflict that has been ongoing over the Nagorno-Karabakh region.

Four U.N. Security Council and two U.N. General Assembly resolutions, as well as decisions by many international organizations, demand the withdrawal of the occupational Armenian forces from Nagorno-Karabakh and seven other occupied regions of Azerbaijan.

The current skirmishes appear to be the most serious spike in hostilities since 2016 when scores were killed in four days of fighting.

“The Tovuz region is quite strategic, most of our pipelines go through that region. Also, previously we heard a lot of threats from Armenian security and military leadership – threatening to attack critical infrastructure of Azerbaijan. That should be considered when asking the question ‘Why here?’” Ibrahim said.

International concern has been heightened due to the threat to stability in a region serving as a corridor for pipelines taking oil and gas from the Caspian Sea to global markets.

Saying that Azerbaijan will never tolerate such provocations, the envoy said that Baku’s response to continued attacks would be manifold.

“Armenia is getting more reinforcements. What their goals are, is hard to say,” Ibrahim stressed, “Again, our message is clear. We have the right by the U.N. Charter for self-defense, and we will continue to exercise it.”

Azerbaijan, with more than 100,000 active military personnel, has a high defense budget thanks to its rising oil revenues and bigger population compared with Armenia; the latter is mainly outnumbered for a serious clash with Baku.

Between 2009 and 2018 Baku’s military spending totaled roughly $24 billion, according to data from the Stockholm International and Peace Research Institute while Yerevan spent slightly more than $4 billion in the same period.

Even more striking was that thousands poured into the streets in Azerbaijan, protesting the occupation of Nagorno-Karabakh and border clashes with Armenian troops. Gathered in front of the National Assembly building in the capital, the crowd demanded the government to declare a mobilization as they are ready to go to the frontlines and protect their motherland.

Day by day, the Azerbaijani army saw thousands of young volunteers applying for service, with the figure rising by almost 10,000 per day and the latest numbers being 46,000 as of Monday to voluntarily fight for the restoration of the territorial integrity of Azerbaijan. Saying the people’s reaction was highly significant, Ibrahim underlined that the government in its actions is reflecting the will of the people.

Turkey has also thrown its weight behind its close ally, condemning Armenia’s acts. Several high-level announcements and strong messages came from Turkey following the attack, as Ankara reiterated that it stands with Baku in these difficult times and warned Armenia to respect Azerbaijan's territorial integrity. Turkish Defense Minister Hulusi Akar on Thursday met his Azerbaijani counterpart Ramiz Tahirov, as Ankara voiced concern over the tension that has been ongoing since the invasion of Nagorno-Karabakh, which turned into a conflict with Armenia's "reckless and systematic attacks."

‘Armenia seeks to bring in Russia’

Another major player in the region is Russia, which has a military base in Armenia and is, together with the U.S. and France, co-chair of the Minsk group of the Organization for Security and Cooperation in Europe, that has tried to negotiate a settlement of the Nagorno-Karabakh conflict.

“What we see in this process is that Armenia wants Russia to be in this situation. Armenia definitely had double goals. The first was internal to deviate attention from domestic problems vis-a-vis the previous government, vis-a-vis COVID-19, which is not handled properly and the socioeconomic situation. The second purpose is definitely bringing in the Collective Security Treaty Organisation (CSTO) and Russia,” Ibrahim pointed out.

The envoy elaborated that Armenia intentionally did not start the skirmishes on the illegally military occupied regions of Azerbaijan but rather in Tovuz, right on the border between Azerbaijan and Armenia, which could lead to a response affecting the territory of Armenia. Therefore giving the Armenian government the possibility to pave the way to call their allies, appeal to the CSTO and Russia, its biggest member.

“Why they did it right on the border with Azerbaijan was definitely because they wanted to attract their allies into this conflict,” he underlined.

Internal problems give way to external ones

“Since (Armenia's Prime Minister Nikol) Pashinian came to power he faces probably the most difficult times. The socioeconomic situation is bad, a lot of demonstrations against the government’s handling of COVID-19 take place,” the Azerbaijani envoy stated, adding that Armenia has one of the worst situations globally in terms of the coronavirus outbreak. “They are one of the worst-hit and worst-managed countries,” he said.

With virus cases in Armenia having increased to 35,254, according to Health Ministry data, the measures undertaken to fight the COVID-19 pandemic do not seem to bring any tangible results, as the cases of infection grow every day while the state of emergency announced in March due to the pandemic was extended until Aug. 12.

Pashinian came to power in May 2018 after spearheading massive protests that forced his predecessor to step down. Former Armenian President Robert Kocharian has been jailed for a time that he contends was political revenge by the country’s current leadership. Kocharian is one of the prominent leaders of the “Karabakh clan”: a hero of the Nagorno-Karabakh War and the disputed territory’s former head.

“When something is happening internally, the Armenian government is trying to deviate attention from internal problems to external ones,” Ibrahim said.

Referring to the Minsk Group’s works, created in 1992 to encourage a peaceful, negotiated resolution to the conflict between the two neighboring countries, Baku’s envoy voiced pessimism.

“The Minsk Group has been entitled to solve this issue for almost 30 years,” he said, underlining that despite most countries and international organizations recognizing that it is Armenia that illegally and militarily occupies the territories of Azerbaijan, despite U.N. Security Council resolutions and many international institutions demonstrating that there was damage not only to the properties of Azerbaijan but also destruction of our cultural heritage and genocidal approaches, lootings of natural resources, Minsk group co-chair countries never announced a clear position.

“I do not want to say we expect, because it is too late to say that we expect something from the Minsk group co-chairs, I think the right word is we demand justice,” he added, “Less action by the co-chairs toward the occupied territories of Azerbaijan probably emboldened Armenia to engage in more attacks on other parts of Azerbaijan.”