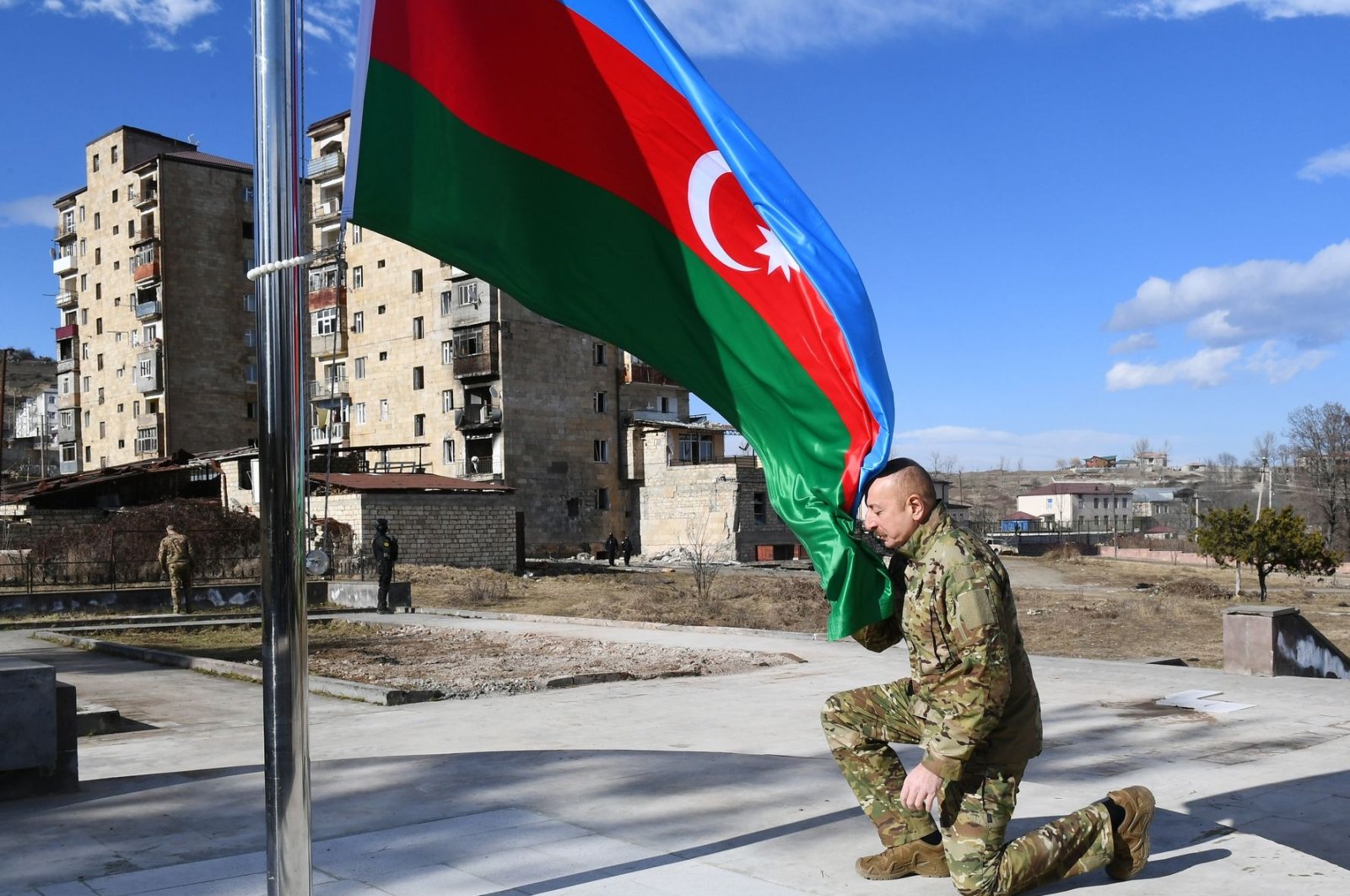 Azerbaijani President Ilham Aliyev kneels in front of the national flag during his visit to the historic town of Shusha in Nagorno-Karabakh, Azerbaijan, Jan. 15, 2021.
by Daily Sabah with AA Jan 20, 2021 9:27 am
RECOMMENDED

The tragedy of Jan. 20, 1990, also called Black January, was an "important turning point" for Azerbaijan which proved that the nation's struggle for liberty and independence was irreversible, Azerbaijan's envoy to Turkey said Wednesday.

"It led us to be more united and more determined to make our country the best and to get what we deserve – independence," Khazar Ibrahim told Anadolu Agency (AA), referring to the massacre of more than 130 people and wounding of hundreds of civilians by the Soviet army in the capital Baku and surrounding areas on the eve of the country's independence.

Marking the 31st anniversary of the tragedy and remembering the violence Azerbaijan witnessed prior to the breakup of the Soviet Union, Ibrahim said the events of Jan. 20 are regarded as the rebirth of the country, which in 1918 first gained independence that was later stamped out in 1920 when the country became part of the Soviet Union.

On the night of Jan. 19-20, under direct instructions from Soviet leader Mikhail Gorbachev, the State Security Committee and Ministry of Internal Affairs entered Baku and nearby regions, massacring the civilian population using heavy military equipment and other weaponry.

"It (the tragedy) has also changed us individually. Those people who went through those days have changed dramatically, including me personally," he recalled.

"Actually, it's not a secret anymore that the real rationale behind the Black January tragedy was the desire by the Soviet leadership to calm down, to suffocate the striving of the Azerbaijani people for liberties, rights and independence," he said, adding Gorbachev did not hide his "negative inclination" toward Azerbaijan.

"And the fact that there was an indiscriminate overwhelming reaction to people's rights, which was actually in the constitution of the Soviet Union, cannot be explained by anything else but by hatred, by the desire to keep the Soviet Union afloat," the envoy said.

He emphasized that the "hatred" was also influenced by the Armenian advisers who had lobbied Gorbachev for a long time, not only on the Jan. 20 issue but also on many other issues regarding Azerbaijan, in a negative way.

Azerbaijanis refer to Black January as a day of sorrow, but at the same time, as a day of pride, because the country's heroes who perished laid the groundwork for the state's independence.

Nagorno-Karabakh issue as grounds for Jan. 20

The Azerbaijani ambassador underlined that the Nagorno-Karabakh issue laid the groundwork for the Jan. 20 tragedy.

The events that led to the tragedy of Black January actually date to the end of the 1980s, when attempts to annex Nagorno-Karabakh to Armenia and another wave of the expulsion of native Azerbaijani people from their historical lands were gaining momentum.

He said that nearly three decades ago, the Azerbaijani territories had been militarily illegally occupied by Armenian forces through the "ethnic cleansing of Azerbaijanis" which led to hundreds of thousands of ethnic Azerbaijanis becoming both internally displaced persons as well as refugees because the cleansing also took place against Azerbaijanis living in Armenia.

During the nearly six-week-long conflict, Azerbaijan liberated its lands, while at least 2,855 of its soldiers were known at the time to be martyred. There are differing claims about the number of casualties on the Armenian side, which sources and officials say could be as high as 5,000.

The two countries signed a Russian-brokered agreement on Nov. 10 to end the fighting and work toward a comprehensive resolution. The cease-fire is seen as a victory for Azerbaijan and a defeat for Armenia, whose armed forces have withdrawn in line with the agreement.

The envoy stressed that the major factor behind the long-awaited victory was the determined leadership of Azerbaijan's president and commander-in-chief, Ilham Aliyev.

Referring to the 44-day Patriotic War, Ibrahim said, "The kids who fled the occupied territories of Azerbaijan in the hands of their mothers came back (to those territories) on top of the tanks."

He highlighted that those fleeing children emerged into a new generation after the territories were cleansed and destroyed, and today, they have become the soldiers of Azerbaijan, who couldn't have forgotten the "injustice" that took place in the past.

Ibrahim also hailed the solidarity of the Azerbaijani people, noting that "regardless of the place of living, regardless of ethnicity, religious affiliation, everybody was a swarm."

"Therefore, I see these three reasons as the major factors which allowed Azerbaijan in this short period of time to achieve what could have seemed for many as unimaginable a couple of years ago," he said, referring to the soldiers, the strong sense of solidarity and a determined president.

A lot has changed in Azerbaijan in the last 30 years, the ambassador said.

Despite the illegal military occupation of its territories, the people of Azerbaijan never lost their "sense of pride and unity" and became even stronger and more confident within these years, he added.

"The Azerbaijani side has never hidden that since we have the right and since we have the power, we are ready to liberate our territories. But I think it was a big mistake by the side of the Armenians not to listen not only to us but also to the international community," Ibrahim said.

Ibrahim urged the international community not to turn a blind eye to the tragedies of other countries, noting that "if these things happen, it would embolden other massacres."

"So ‘never again embolden the criminals' is the message which the world should hear and never forget," he said.

Meanwhile, several nongovernmental organizations released statements on the occasion of the 31st anniversary of the Jan. 20 massacre.

In his message, Asıf Kurban, the chairperson of the World Azerbaijanis Congress, noted that Azerbaijanis successfully opposed the Red Army, in a display of their own identity.

“What is strange is that Mikhail Gorbachev, who ordered the massacre, was handed the Nobel Peace Prize,” Kurban said, adding that he was given the prize partially facilitated by funds obtained from the oil in Azerbaijan.

He continued by saying that the incident will never be forgotten and that he remembers the martyrs with mercy and gratitude.

A commemoration ceremony was also held in the Turgutlu district.

On the occasion of 20 January 1990 Baku massacre, which is known as #BlackJanuary, the @TurkicCouncil respectfully commemorates all the heros of #Azerbaijan who sacrificed their lives for the sake of their homeland.

We bow respectfully in front of their cherished memories. pic.twitter.com/3ITVKHKV1G