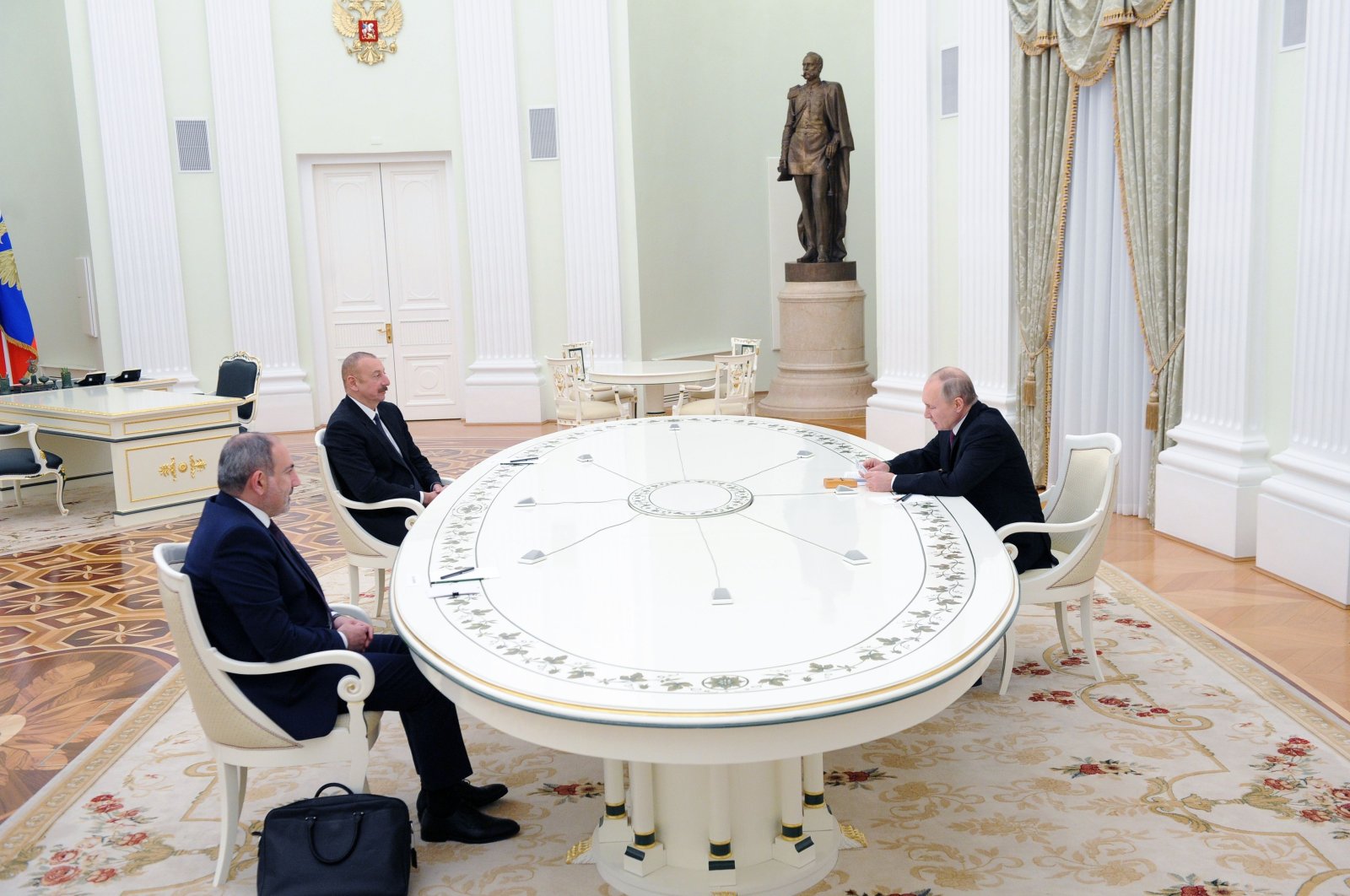 The leaders of Russia, Azerbaijan and Armenia met to hold a trilateral meeting in Moscow on Monday. Vladimir Putin, Ilham Aliyev and Nikol Pashinian gathered in the Russian capital to discuss the implementation of the agreement on Nagorno-Karabakh, which was signed on Nov. 9 and marked the end to 44 days of fighting between Baku and Yerevan.

Putin said the cease-fire deal, which stipulates Moscow deploy peacekeepers, is being implemented without serious incident and the talks had been useful.

"We were able to agree and sign a joint declaration on developing the region," he said. "I'm talking about concrete steps to build economic links and to develop (transport) infrastructure projects."

Pashinian, however, said it had not been possible to broker an exchange of the remaining prisoners but he and Aliyev both indicated progress in other areas, with each talking positively about economic and infrastructure prospects.

Aliyev said his country would have a rail link with Nakhchivan for the first time in over three decades, an Azerbaijani exclave that borders Turkey and Iran, and that landlocked Armenia, via Azerbaijani territory, would get rail links with Russia and Iran.

The atmosphere at the talks was frosty. Pashinian and Aliyev did not shake hands, only exchanging curt greetings when they sat down in the Kremlin opposite Putin.

When new clashes erupted on Sept. 27, 2020, the Armenian Army launched attacks on civilians and Azerbaijani forces and even violated humanitarian cease-fire agreements.

During the six-week conflict, Azerbaijan liberated several cities and nearly 300 settlements and villages. There are differing claims about the number of casualties on the Armenian side, which, sources and officials say, could be up to 5,000.

The two countries signed a Russian-brokered agreement to end fighting and work toward a comprehensive resolution.

Violations, however, have been reported in the past few weeks, with some Armenian soldiers said to have been hiding in the mountainous enclave.

The one-sided and partial attitude of Russian military elements deployed in the Karabakh region to monitor the cease-fire deal has raised eyebrows in Azerbaijan.

Deployed to the region as part of the cease-fire deal, Russian troops sometimes exhibit a pro-Armenia attitude instead of taking the required neutral stance for the implementation of the peace agreement, Azerbaijani officials said.

Most recently, Azerbaijan's Foreign Ministry said last week that the Armenian foreign minister's visit to the Nagorno-Karabakh region violated the conditions of November's trilateral agreement that put an end to the conflict between the two countries.

Aliyev also protested against the Armenian minister's visit and his meeting with Armenian separatist forces' senior figures, warning that Yerevan will regret it if it keeps taking such provocative steps.