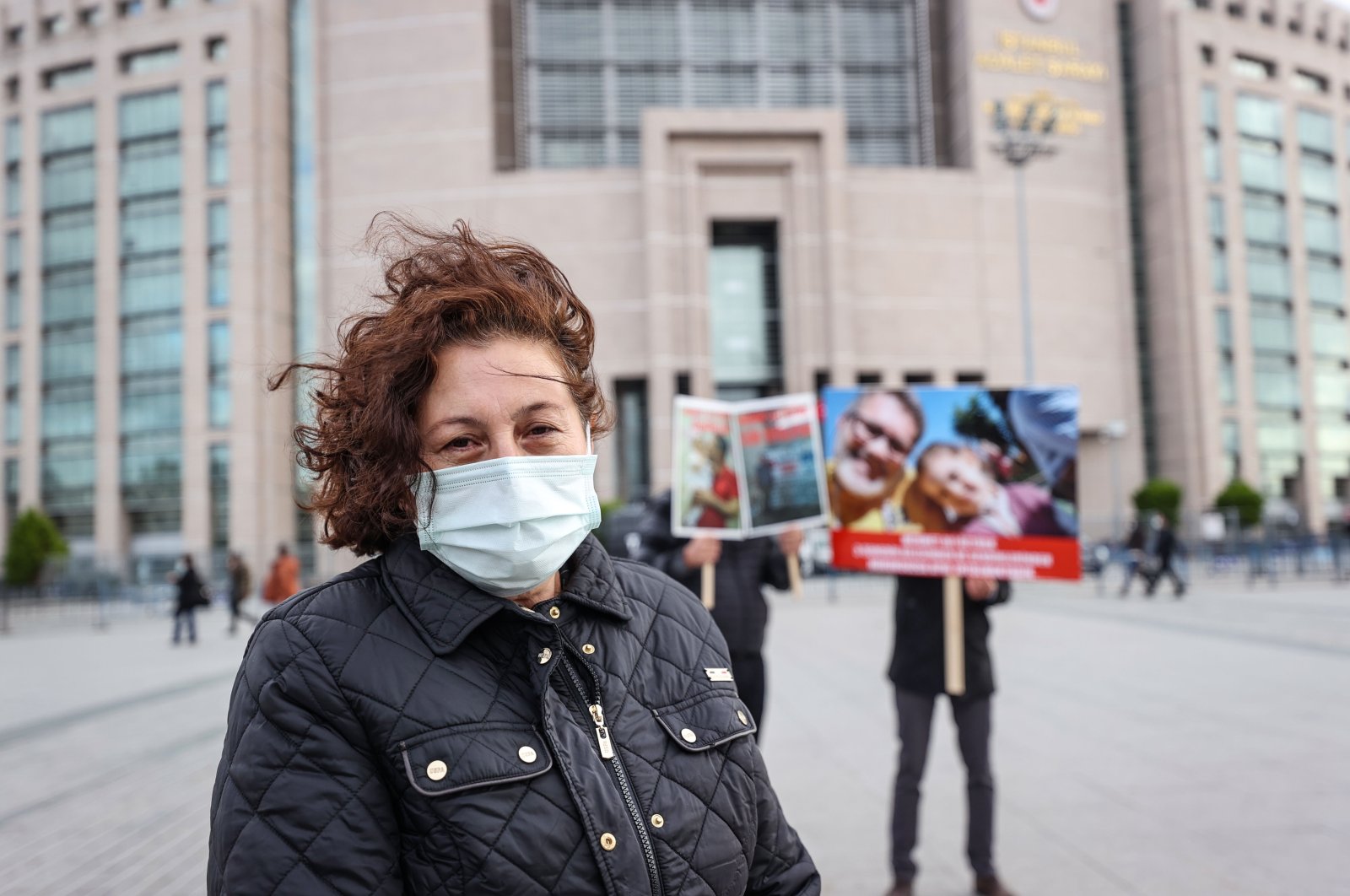 Emine Öztürk protests the imprisonment of his husband Mehmet Ali Öztürk in the UAE in front of a courthouse in Istanbul, Turkey, Dec. 11, 2020. (AA Photo)
by DAILY SABAH WITH AA Dec 16, 2020 5:15 pm
RECOMMENDED

Lawyers of a Turkish businessperson, who has been remanded in custody in the United Arab Emirates (UAE) on trumped-up charges for three years, have applied to a human rights institution in Turkey.

Mehmet Ali Öztürk's lawyers Mete Gencer and Gülden Sönmez said in a written statement that they have provided information for the Human Rights and Equality Institution of Turkey (TIHEK) about the detention of their client and his wife, Emine Öztürk, in Dubai, and the incidents they were subjected to.

In an earlier statement, Emine Öztürk, who owns a Turkish pulses company with her husband Mehmet Ali Öztürk, said they were detained at the Gulfood Fair in Dubai in February 2018. She said their heads were covered with cloth bags, they were handcuffed and were taken to an unknown location by people in plainclothes.

She was deported to Turkey, while her husband was sentenced to 25 years in prison.

The details of "torture and tyrannical acts" against the businessperson during and after his interrogation in the Emirati intelligence center were also mentioned in the application to the institution, the lawyers said.

They also noted that his son, Abdullah Öztürk, was held simultaneously and interrogated by the FBI in the U.S., and the statement for the Turkish rights institution included data on the U.S.' role and intelligence sharing in the businessperson's detention and interrogation.

"TIHEK's support is requested in the process of seeking justice for Mehmet Ali Öztürk and his family, who are chosen as victims by the UAE as part of its hostile policies against Turkey, due to their exposure to violations such as torture, bad and tyrannical treatment, the risk and threats of death during torture, arbitrary detention, enforced disappearance, restriction of liberty, violation of the right to a fair trial," said the statement.

They also requested TIHEK and its National Prevention Mechanism to work for Öztürk's release, as well as to form a delegation to visit him in Al Wathba Prison in Abu Dhabi.

On Dec. 11, the businessperson's lawyers filed a criminal complaint with Istanbul prosecutors against the UAE officials involved to be forwarded to the Justice Ministry.

Relations between Turkey and the UAE have hit an all-time low, as President Recep Tayyip Erdoğan announced in August that Ankara may suspend its diplomatic relations with the Abu Dhabi administration in response to the recent UAE-Israel normalization deal.

Turkish officials say the UAE supports terrorist organizations that target Turkey and has become a useful political and military tool for other countries.

In August, Turkey’s National Intelligence Organization (MIT) revealed that the UAE, in cooperation with Israel, was planning to try to destabilize Turkey, Iran and Qatar. The agency said that wanted UAE spy Mohammed Dahlan, who maintains contact with recently established outlets in Turkey, served this cause by channeling funds into certain anti-Turkey media organizations. Turkey also revealed last year that the Emirati spy network had been operating all over the country.

Dahlan owns media outlets in the UAE, Egypt and Jordan. Turkey added Dahlan to its most wanted terrorist list last year for his connections to the Gülenist Terror Group (FETÖ) and his role in the July 15, 2016, coup attempt, which led to the deaths of 251 people.