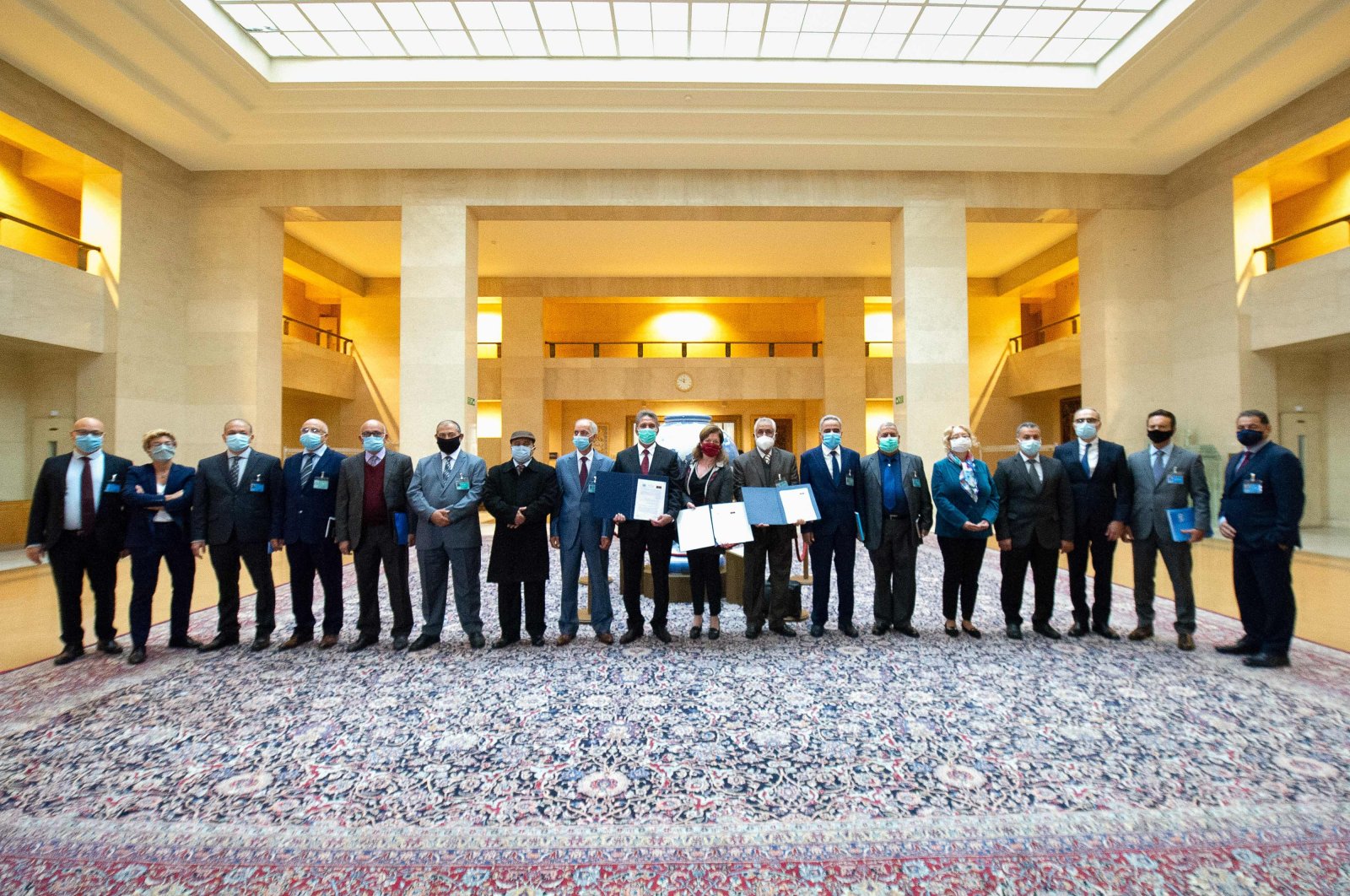 Representatives of Libya's two rival factions pose with the head deputy special representative of the U.N. Secretary-General for Political Affairs in Libya Stephanie Williams (9R) after a signing ceremony in Geneva, on Oct. 23, 2020. (AFP Photo)
by DAILY SABAH WITH AGENCIES
Oct 23, 2020 12:36 pm

Libya's two rival factions signed a "permanent" cease-fire agreement Friday after five days of talks at the United Nations headquarters in Geneva, which hailed the move as a moment that will go down in history.

"Today is a good day for the Libyan people," said Stephanie Williams, the U.N.'s envoy to the troubled North African country, where the U.N.-recognized Government of National Accord (GNA) in Tripoli has been battling a rival administration based in the east and dominated by putschist Gen. Khalifa Haftar.

"At 11:15 a.m. (9:15 a.m. GMT) this morning here at the U.N. headquarters in Geneva, the two Libyan delegations... signed a complete, countrywide and permanent cease-fire agreement with immediate effect," she said.

"The agreement was facilitated by the United Nations, and we signed it as witnesses," she told a news conference in the Swiss city.

The breakthrough was announced on Friday at a signing ceremony that was streamed live on the Facebook page of the U.N. Support Mission in Libya (UNSMIL).

"The 5+5 Joint Military Commission talks in Geneva today culminate in a historic achievement as Libyan teams reach a permanent cease-fire agreement across Libya," it said.

"This achievement is an important turning point toward peace and stability in Libya."

Libya for nearly a decade has been dominated by armed groups, riven by local conflicts and divided between the two bitterly opposed administrations. But hopes for a solution have risen after the two warring factions in August separately announced they would cease hostilities. However, both sides continue to accuse each other of supporting "terrorist" groups.

The U.N.-sponsored talks took place in the format of a 5+5 Joint Military Commission: five delegates from each side attend. Delegates, wearing masks, stood before signing the agreement documents at the U.N. Palais des Nations in Geneva.

Williams said it was "a moment that will go down in history."

"You have met for the sake of Libya, for your people in order to take concrete steps to put an end to their suffering," she said.

"Nobody can love Libya as much as you do," said Williams, who heads UNSMIL.

On Tuesday, the second day of the talks, Williams said that Libya's rival factions had agreed to maintain a lull in fighting and open internal land and air routes.

"What you have accomplished here is a crucial sign for Libya and the Libyan people," she said on Friday.

"I am hopeful that future generations of Libyans will consider today's agreement as a first, critical, courageous step to achieve a comprehensive settlement of the Libyan crisis, that has gone on for too long."

Williams said there was a lot of work ahead in the coming weeks in order to implement the commitments, but it was essential to do so as quickly as possible.

"The road was long and difficult at times. Your patriotism was your way forward, and you were able to reach a cease-fire agreement," she said.

"I hope that this agreement will help put an end to the suffering of the Libyan people, and we hope it will allow the displaced and refugees inside and outside the country to return to their homes and to live in peace and safety."

All mercenaries and foreign fighters are supposed to depart from Libya within three months, she added.

Ali Abushahma, the head of the delegation and a field commander for the U.N.-supported administration in Tripoli, said: "We have had enough suffering, enough bloodshed ... We hope we will change the suffering on all the territories of Libya, especially in the south."

“I appeal to all Libya: Be one hand,” he said, warning about polarization by factions.

Later in the day, the U.N. Secretary-General Antonio Guterres said the deal is a "fundamental step toward peace and stability" in the country and that there was much hard work ahead.

"I appeal to all stakeholders and regional actors to respect the provisions of the ceasefire agreement and ensure its implementation without delay," he told reporters as he also called for full implementation of a U.N. arms embargo on Libya.

Erdoğan said he hoped that the sides in the Libya conflict will abide by the cease-fire which they signed, but "its reliability does not seem too achievable to me."

"The truce deal in Libya is not one conducted on the highest level. Time will tell how lasting it will be as it was on a lower level," he said.

Haftar, mainly supported by Russia, the United Arab Emirates (UAE) and Egypt, launched an offensive on Tripoli in April 2019 but was pushed back early this year as pro-GNA forces received crucial support from Turkey.

On the other hand, the European Commission welcomed the declaration of the cease-fire in Libya on Friday and called for it to go into immediate effect and for peace talks to resume.

"The agreement of a permanent cease-fire is key for the resumption of a political dialogue," EU foreign policy spokesperson Peter Sano told reporters.

"It's very important, as well, to see this accord put into effect."

Germany also welcomed the ceasefire as a "ray of hope". "The ceasefire agreement finally promises a change of course from military to political logic," German Foreign Minister Heiko Maas said in a statement.

"This news is the first ray of hope for the people of Libya in a long time."

First Tripoli-Benghazi flight for a year

Meanwhile, a commercial passenger plane flew from the Libyan capital Tripoli across front lines to the eastern city of Benghazi for the first time in more than a year on Friday after talks between the country's warring parties in Geneva.

Flights between them had stopped in the summer of 2019 as shelling by Haftar's eastern-based illegitimate forces targeted Tripoli's Mitiga International Airport. Although the GNA drove the Haftar forces back from the capital in June, both Mitiga and Benghazi's Benina International Airport were by then mostly closed due to COVID-19 restrictions. The global pandemic has spread widely across Libya, with more than 50,000 confirmed cases and an official death toll of 768.

Since the GNA advance in June, frontlines have stabilized west of the central coastal city of Sirte and several diplomatic tracks, including the U.N.-brokered Geneva talks, have pushed for a lasting cease-fire.

Last month, the two sides reached preliminary agreements to exchange prisoners and open up air and land transit across the country’s divided territory. This breakthrough also accompanied the resumption of oil production after a monthslong blockade by powerful tribes allied with Haftar.