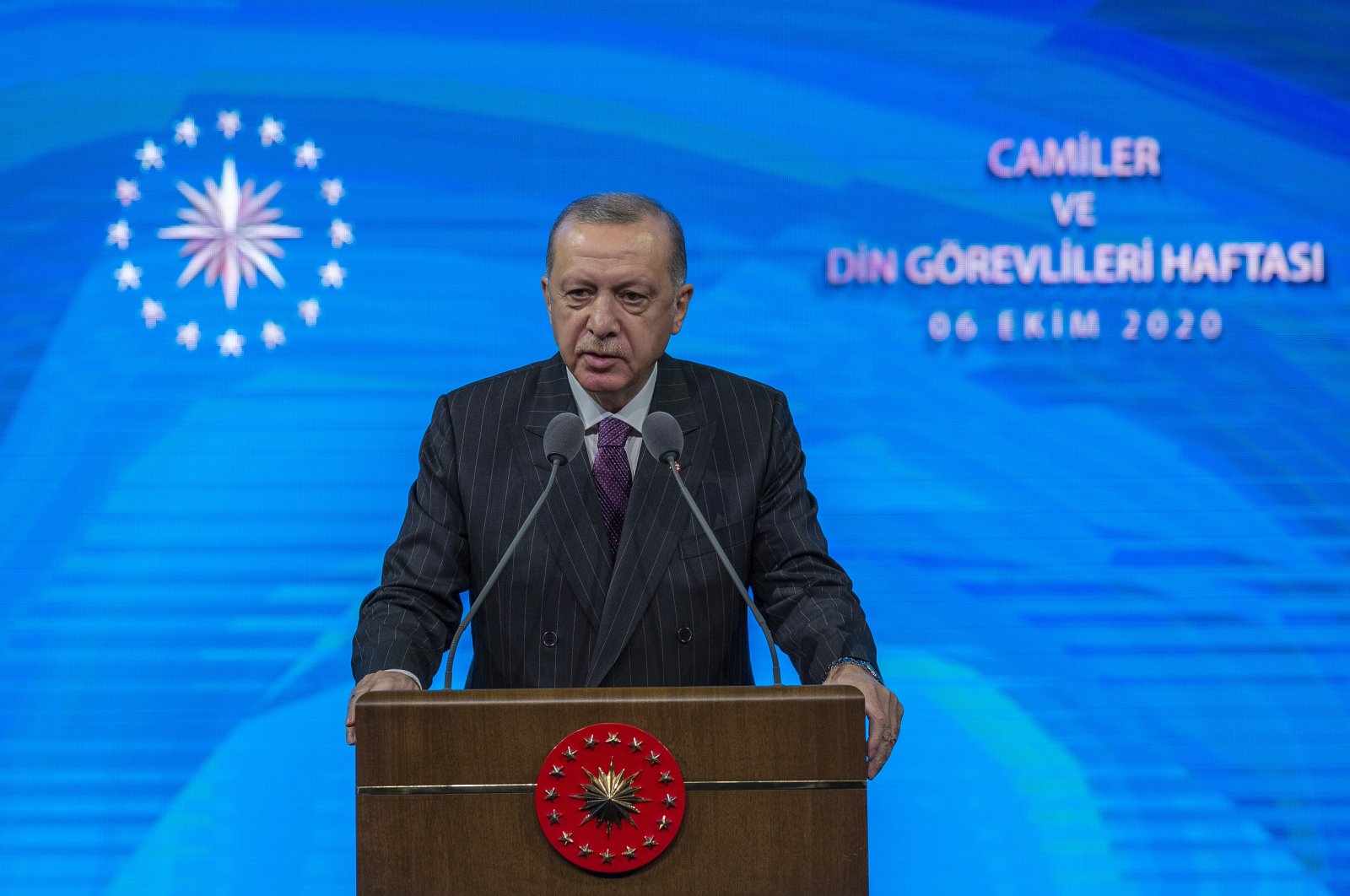 President Recep Tayyip Erdoğan criticized French President Emmanuel Macron for his “disrespectful” comments about Muslims, saying that he is not entitled to propose a restructuring of Islam. Erdoğan also slammed other European leaders for their attitude against Muslims, saying that targeting the Muslim community has become a "tool" for them.

“Macron's recent remarks claiming Islam is in crisis are not simply disrespectful, they are clear provocations. Have we ever said Christianity, Judaism should be restructured? Who are you to propose a restructuring of Islam?” Erdoğan told the audience of the Mosques and Religious Workers' Week program at Beştepe National Congress and Culture Center in Ankara.

“We expect him (Macron) to act like a responsible statesman rather than a colonialist governor,” Erdoğan said.

The president’s criticism was in response to the French president’s recent pledge to fight “Islamic separatism,” which he said was allegedly threatening to take control in some Muslim communities around France, by introducing a new bill.

“Targeting Muslims has become a tool for European politicians to conceal their own failures,” Erdoğan said.

Macron recently claimed that some Islamic religious practices are "separatist" because they threaten to secede from French institutions and rules.

The bill will be sent to parliament early next year, Macron said.

The draft law proposes to restrict homeschooling to avoid having children "indoctrinated" in unregistered schools that allegedly deviated from the national curriculum. Meanwhile, prefects will also be given the power to annul decisions by mayors to restrict school cafeterias or swimming pools to women or men only.

Erdoğan also criticized other European leaders for their hypocritical attitude against terrorists.

“European countries shape their attitude against terrorists according to the identity of the terrorists,” he said, noting that they only call them terrorists when they want to.

The Turkish president has frequently slammed European powers for refusing to call YPG/PKK terrorists as “terrorists.”

Support for the YPG in Syria from France, the United States and several other Western countries has become one of the stumbling blocks in bilateral ties between Turkey and its two NATO allies.

Back in April 2019, Macron hosted a delegation of the so-called SDF, which is dominated by the YPG terrorist group.

Macron assured the YPG representatives, who were not named, of the "active support of France in the fight against Daesh which continues to be a menace for collective security," the presidency said in a statement.

The move came following the U.S. decision to withdraw from Syria, creating fear among YPG terrorists that they would be left alone without support in the region.

The U.S. has primarily partnered with the YPG in northeastern Syria in the fight against the Daesh terrorist group.

Turkey strongly opposes the YPG's presence in northern Syria, which has been a major sticking point in strained Ankara-Washington relations.

The U.S. has provided military training and thousands of truckloads of weaponry to the YPG, despite its NATO ally's security concerns.

The PKK, which is listed as a terrorist group by Turkey, the United States and the European Union, has waged a terror campaign against Turkey for more than four decades and has been responsible for the deaths of nearly 40,000 people, including women and children.

Tensions between the two leaders flared over a number of disagreements, including the Eastern Mediterranean, the Libyan crisis and the Nagorno-Karabakh crisis.

France in late August had also deployed military jets to the Greek side of the island of Cyprus under the pretext of holding a drill with Greece and Italy, which was criticized by Turkey for violating the 1960 treaties on Cyprus.

In Libya, France supports the putschist Gen. Khalifa Khaftar against the U.N.-recognized Government of National Accord (GNA) backed by Turkey, while Paris supports Armenia, which has been occupying Azerbaijan’s Nagorno-Karabakh region for the past three decades.