Migrant mother abandons son's body at sea to survive, thanks Turkey for rescue 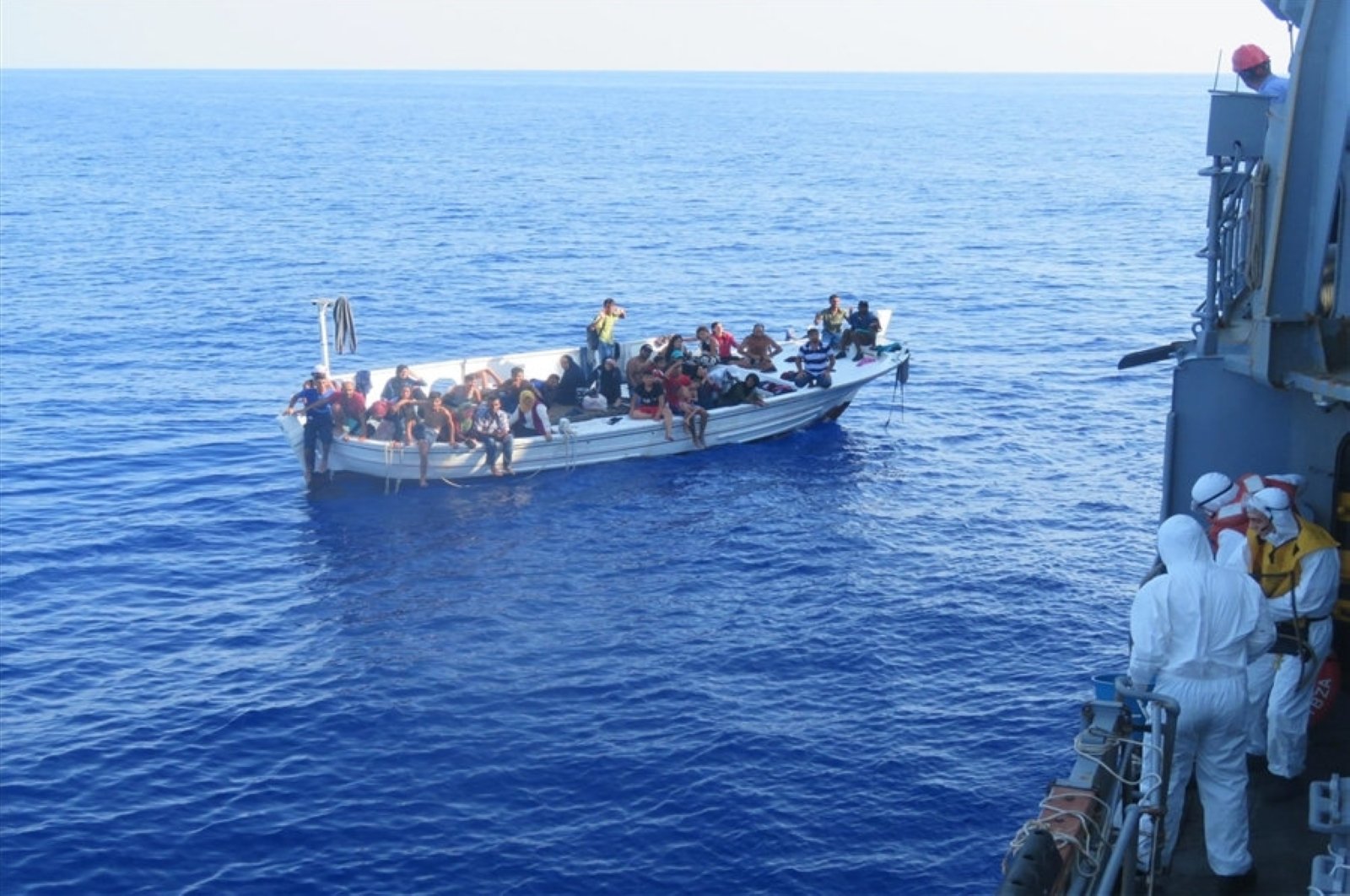 Thirty-six irregular migrants were rescued by the personnel of TCG Bozcaada corvette, which is on a mission as part of the United Nations Interim Force in Lebanon (UNIFIL), in the Mediterranean Sea, Sept. 15, 2020. (AA Photo)
by DAILY SABAH WITH AA Sep 18, 2020 12:48 pm
RECOMMENDED

A Lebanese mother, whose child lost his life during the journey, expressed her gratitude to Turkish security forces Friday for rescuing her, along with 36 others, who were on the verge of death during an eight-day wait for help in the Mediterranean Sea.

Zaynab al-Qaq faced the horror of losing her 2-year-old son as they languished without water in the middle of the sea.

Lebanon is facing one of the biggest economic crises in its history, causing many people to flee the country in the hope of reaching Europe via the Mediterranean through illegal means. However, these migration waves have frequently resulted in humanitarian tragedies.

A boat holding 50 migrants, leaving from the country’s northern city Tripoli, suffered the same fate. After the boat lost its route and ran out of gas, migrants were stranded at sea for eight days.

While four lost their lives and 10 tried to swim for land, the remaining 36 were rescued by personnel from the TCG Bozcaada corvette, which was on a mission as part of the United Nations Interim Force in Lebanon (UNIFIL).

Al-Qaq, one of the rescued migrants, said they had struggled even to find food for their baby in Lebanon and planned to go to the island of Cyprus in the hope of a better life.

“We sold our house and belongings in order to go to Cyprus. Then, we gave the money to people who could take us there,” she said, adding that the 50 on the boat included her husband and their four children.

Stating that they had lost their route and ran out of gas after leaving Tripoli, al-Qaq said her 2-year-old son had lost his life on the third day of their wait for help.

“We were thirsty. My son was screaming to have water. Other children were crying loud due to hunger and thirst. There was nothing to give them,” she said. Her son died soon after.

The mother added that when they saw a ship with a Turkish flag on the eighth day, they started to shout in order to be heard.

After the ship noticed the boat, Turkish soldiers came to rescue them, she added.

“The Turkish army rescued us. The Lebanese army left us alone for eight days. Where are the coast guard and people working at sea? People migrate in front of the eyes of the coast guard and travel for hours. There was no one until the Turkish soldiers came. What would we have done if they hadn't come?”

Another migrant, Adnan Bahri Ismael, whose grandchild was among those who lost their lives during the journey, also said that his son-in-law could not meet the needs of his family anymore and borrowed money to reach Europe.

After his daughter and her family started their journey, he said he did not hear from them for two days.

“First, we thought that they arrived on the island of Cyprus, but then we started to worry. We contacted people from Cyprus and we learned that they did not arrive.”

Ismael cited what his daughter told him and said: “After they departed on the night, their gas ran out and babies started to die. There was no water or milk ... A ship passing by saw them after days passed and it turns out that it was a Turkish ship.”

Stating that their family also has Turkish origins and his mother was a Turkish citizen, Ismael said: “We informed the Lebanese authorities about the boat but we could not receive any response. We are expecting help from Turkey.”

The incident grabbed the attention of social media users, too. The fate of the baby was likened to that of Alan Kurdi, a 3-year-old Syrian boy whose image made global headlines after he drowned on Sept. 2, 2015, in the Mediterranean Sea. Photographs of his body were taken by Turkish journalist Nilüfer Demir and quickly spread around the world, eliciting international responses. He and his family were Syrian migrants trying to reach Europe amid the European refugee crisis.

Lebanon's financial crunch has seen tens of thousands lose their jobs or part of their salaries, sparking sharp inflation and pushing poverty rates up to encompass more than half the population.

Tripoli was one of Lebanon's poorest cities even before the crisis, which has been compounded in recent months by the coronavirus pandemic and a catastrophic explosion at Beirut's port that killed 190 people.