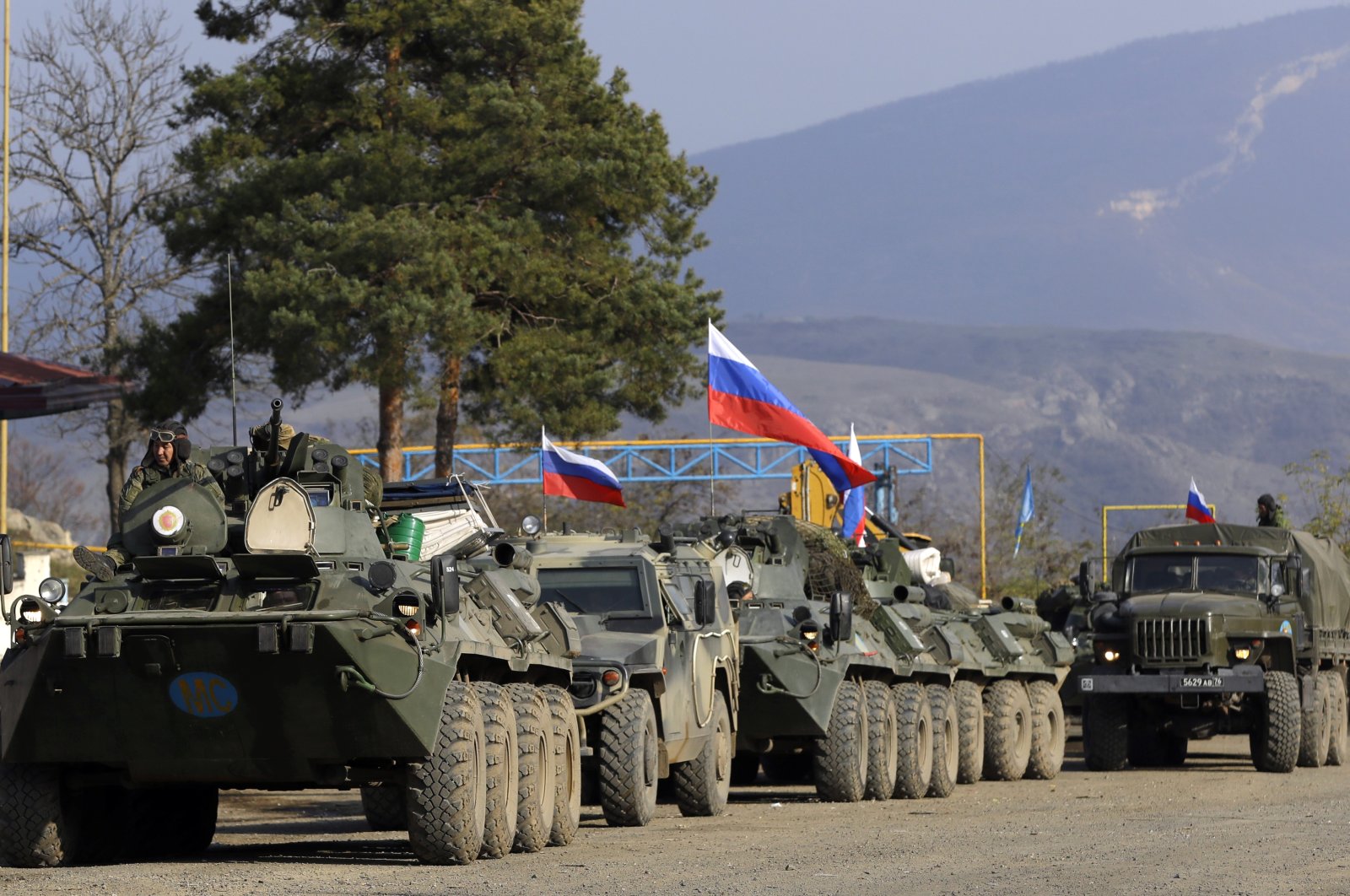 Russian peacekeepers' military vehicles with Russian national flags parked at a checkpoint on the road to Shusha in the region of Nagorno-Karabakh, Nov. 17, 2020. (AP Photo)
by Agencies Nov 18, 2020 11:34 am
RECOMMENDED

French and American diplomats are scheduled to hold talks with Russia on Wednesday in Moscow to discuss ambiguities in the Azerbaijan-Armenia cease-fire deal for the Nagorno-Karabakh region, France's foreign minister said Tuesday.

"Tomorrow, we will have a meeting in Moscow with the envoys related to the dossier to lift the ambiguities surrounding the cease-fire," Jean-Yves Le Drian told lawmakers in parliament.

"We must remove the ambiguities over refugees, the delimitation of the cease-fire, the presence of Turkey, the return of fighters and on the start of negotiations on the status of Nagorno-Karabakh," he said as reported by Agence France-Presse (AFP).

Russian President Vladimir Putin brokered the cease-fire between Azerbaijan and Armenia, which allowed Azerbaijan to consolidate gains in the territory after several weeks of fighting. But the talks did not involve France or any other Western country.

Le Drian said the issues would be discussed by a meeting in Moscow of diplomats from the so-called Minsk Group – which was set up by the Organization for Security and Co-operation in Europe (OSCE) – a talking shop that tries to find a solution to the conflict, co-chaired by France, Russia and the United States.

Le Drian also denied that France had been passive in the conflict by failing to support Armenia, saying "discussions have already begun" over the future status of Nagorno-Karabakh with Putin and the United States.

"The cease-fire was essential to save thousands of lives. But there are ambiguities," said Le Drian.

The U.S. State Department backed France's view, saying there were still questions that the Russians needed to clarify about the deal, "and that included the role of the Turks."

U.S. Secretary of State Mike Pompeo, on a visit to Georgia, which borders both parties to the conflict, said the cease-fire was just a first step toward creating a peaceful settlement.

He urged all sides to start talking under the Minsk Group's auspices.

The cease-fire signed by leaders of Armenia, Azerbaijan and Russia on Nov. 10 halted military action in and around Nagorno-Karabakh, an enclave internationally recognized as part of Azerbaijan but populated by ethnic Armenians. Some 2,000 Russian peacekeeping troops are being deployed to the region.