Nagorno-Karabakh reconstruction highlight of Azerbaijan in 2021 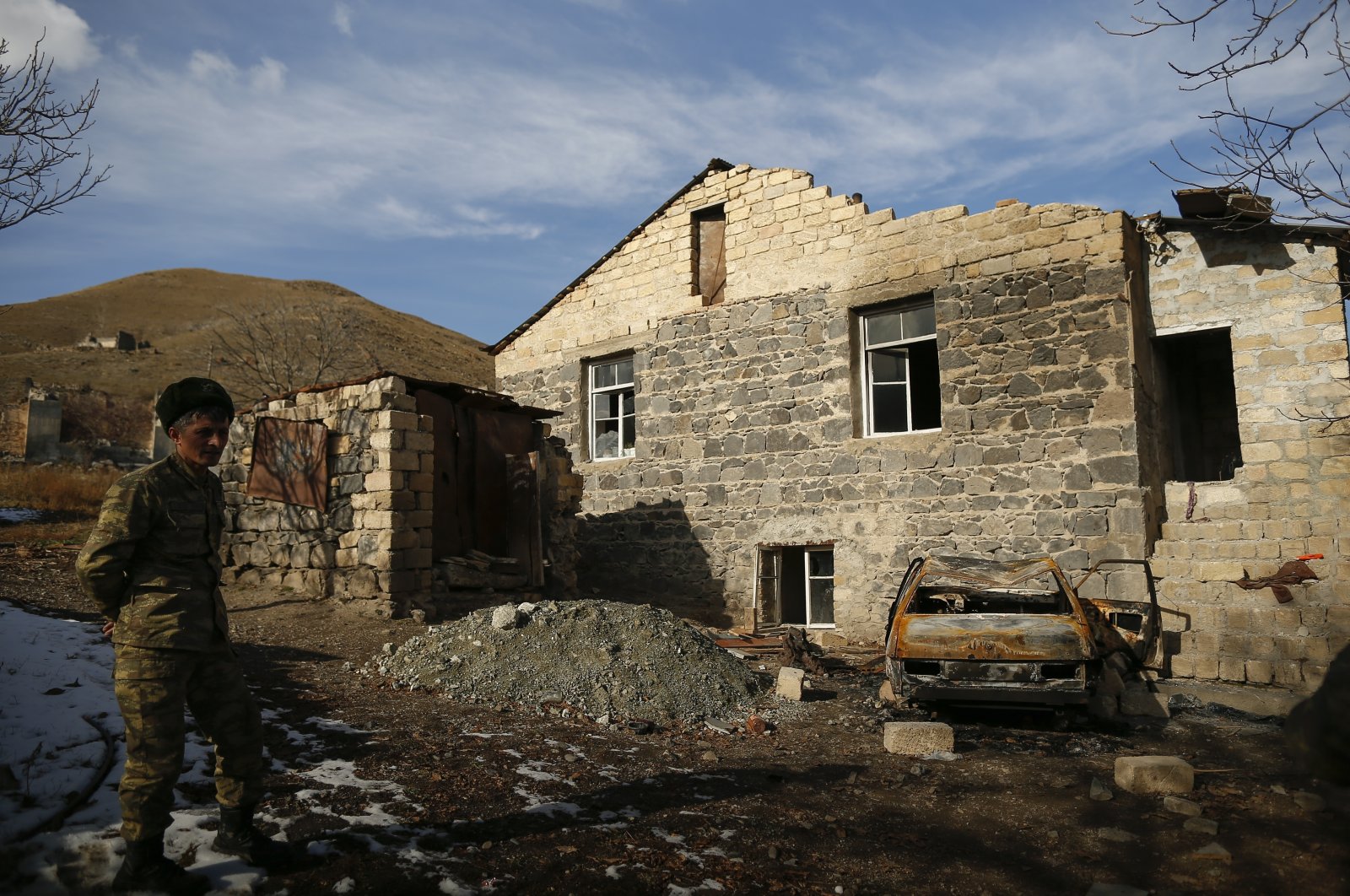 An Azerbaijani soldier stands near a destroyed house after the transfer of the Kalbajar region to Azerbaijani control, as part of a peace deal requiring Armenia to cede Azerbaijani territories they illegally occupied outside Nagorno-Karabakh, Kalbajar, Azerbaijan, Dec. 2, 2020. (AP File Photo)
by Anadolu Agency Dec 30, 2021 9:02 am
RECOMMENDED

In the past year, Azerbaijan mainly focused on the reconstruction of the Nagorno-Karabakh region, which was liberated after nearly 30 years of illegal Armenian occupation, as well as diplomatic efforts.

The early days of 2021 witnessed Azerbaijani officials stepping up the country's diplomacy to consolidate the country's position following its victory in the conflict with Armenian forces.

On Jan. 11, Russian President Vladimir Putin, Azerbaijani President Ilham Aliyev and Armenian Prime Minister Nikol Pashinian met in Moscow and signed a trilateral declaration to revitalize the Karabakh region's economy and transportation infrastructure, both of which had been severely harmed by the Armenian occupation.

A working group of the three countries' deputy prime ministers was formed to discuss the opening of the Zangezur land corridor connecting Azerbaijan with its autonomous exclave of Nakhchivan, as well as allowing Armenia railway access to Russia and Iran via Azerbaijan.

However, in the face of stiff opposition in Armenia, Pashinyan later backtracked and declared that the government would not allow Azerbaijan to build a transportation corridor through the country.

As a result of Azerbaijan's persistent diplomatic efforts, Putin, Aliyev and Pashinian met again on Nov. 26 and agreed to remove all obstacles before reopening the railway and land routes.

Another result of the trilateral declaration was the establishment of a joint monitoring center between Turkish and Russian forces that began operations on Jan. 30 in the province of Aghdam to observe compliance with the cease-fire.

Baku and Yerevan were embroiled in a 44-day conflict on Karabakh – a region that lies within Azerbaijan but was under the occupation of Armenia – last year, which ended with a Russia-brokered cease-fire on Nov. 10, 2020.

During the faceoff that started in September 2020, Azerbaijan liberated several cities and 300 settlements and villages that were occupied by Armenia for nearly three decades. The peace agreement is celebrated as a triumph in Azerbaijan.

After the conflict ended, Azerbaijan launched a massive reconstruction initiative in the liberated Nagorno-Karabakh region.

The Fuzuli International Airport, which started to be constructed on Jan. 14, 2021, was inaugurated on Oct. 26 with the participation of the presidents of Turkey and Azerbaijan.

Turkey-Azerbaijan relations were officially updated to the level of strategic partnership through the Shusha Declaration signed by President Recep Tayyip Erdoğan and his counterpart Ilham Aliyev on June 15.

Moreover, the two country's nationals were allowed to travel to each other's countries without passports, using only smart identification cards instead.

Unauthorized movements of Iranian trucks into Armenian-populated areas of Nagorno-Karabakh without official Azerbaijani permission strained Azerbaijan-Iran relations during the conflict.

When the Iranian side refused to back down in the face of growing protests from Baku, border guards and customs officers established checkpoints and imposed duties on incoming Iranian goods.

Tehran responded by claiming that Israel had sent intelligence and military officers to Azerbaijan to survey Iran and initiated military exercises along the border.

Tensions were later de-escalated as a result of Azerbaijan's successful diplomatic efforts.

Aliyev met with his Iranian counterpart Ebrahim Raisi on the sidelines of the Economic Cooperation Organization (ECO) summit in Turkmenistan and discussed outstanding issues.

On Nov. 6, Iranian Foreign Minister Hossein Amir-Abdollahian announced that Tehran and Baku had resolved their differences.