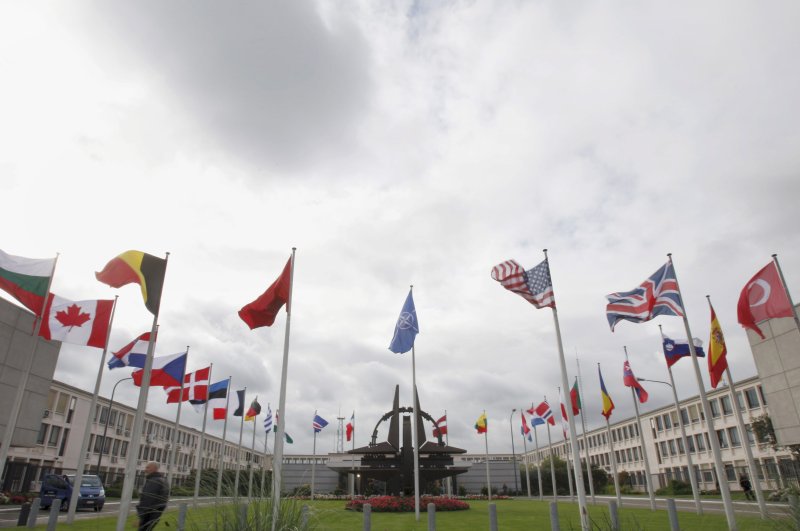 Flags of the NATO allies wave in the wind outside NATO headquarters in Brussels on Wednesday, Oct. 5, 2011. (AP Photo)
by Daily Sabah with Agencies Feb 28, 2020 9:42 am
RECOMMENDED

NATO met on Friday over developments in Syria upon a request by Turkey to hold consultations under Article 4 of the organization’s founding Washington Treaty.

Ambassadors from the NATO military alliance held emergency talks at the request of Turkey following the killing of 33 Turkish soldiers by the Assad regime in northwestern Syria.

NATO Secretary-General Jens Stoltenberg said in a statement that the talks Friday morning would be held under Article 4 of NATO’s founding treaty, which allows any ally to request consultations if it feels its territorial integrity, political independence or security is threatened.

Following the meeting, Stoltenberg said in a press conference that NATO allies condemn the indiscriminate bombing in Idlib and call on Russia and the Syrian regime to stop their offensive and respect international law.

"This dangerous situation must be de-escalated to avoid further worsening of the horrendous humanitarian situation in the region and to allow urgent humanitarian access for those trapped in Idlib. We urge an immediate return to the 2018 cease-fire," he said.

Allies stand in solidarity with Turkey, the secretary-general said, offering condolences to the Turkish nation and the families of fallen soldiers.

Stoltenberg added that the member countries are looking into providing further support for Turkey.

"Today’s meeting is a sign of solidarity with Turkey," he underlined, adding that Turkey is the NATO ally most affected by the "terrible" conflict in Syria, "which has suffered the most terrorist attacks and which hosts millions of refugees."

The deaths were a serious escalation in the direct conflict between Turkish and Russian-backed Assad regime forces that has been waged since early February. At least 54 have now been killed in Idlib since the start of February.