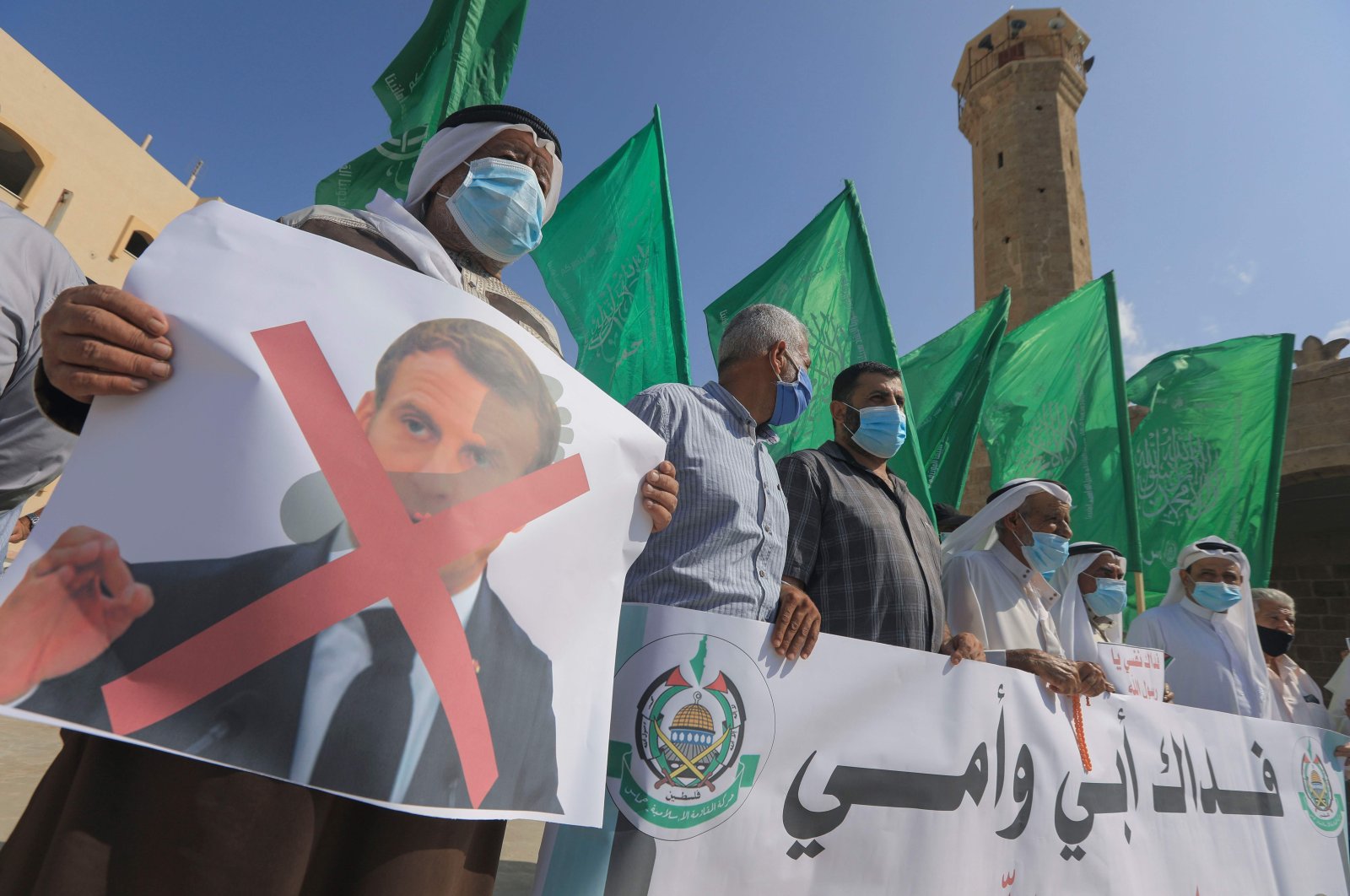 The reaction in the Muslim world continues to escalate against French President Emmanuel Macron’s anti-Muslim remarks as thousands condemning his hateful language, calling on a boycott on French products. President Recep Tayyip Erdoğan said on Sunday that Macron had “lost his way,” in his second sharp criticism of the French leader in two days over the treatment of Muslims.

“The person in charge of France has lost his way. He goes on about Erdoğan all day. Look at yourself first and where you are going. I said in Kayseri yesterday, he is a case and he really must be checked up,” Erdoğan said in a televised speech in the eastern province of Malatya.

Erdoğan said Saturday that Macron needs “mental treatment” because of his hostility toward Islam. “What is Macron’s problem with Islam and Muslims? He needs mental health treatment,” Erdoğan said at the ruling Justice and Development Party (AK Party) congress.

“What can be said to a head of state that treats millions of members of a religious minority in his country this way? First of all, (he needs) a mental check,” Erdoğan added.

France on Saturday recalled its ambassador in Turkey for consultations, as an Elysee Palace statement referred to Erdoğan’s comments about his French counterpart while explaining the recall of the envoy, claiming that they were deemed “unacceptable.” Herve Magro was recalled for consultations, it added.

In a statement, the foreign ministry said France’s recall of its ambassador in Ankara and the issues mentioned in Jean-Yves Le Drian’s remarks shows that Paris has been maintaining its self-centered approach to bilateral relations.

“The French President and French media outlets have not been reacting against our President and country being shown as targets,” the ministry said, adding that the display of derogatory anti-Muslim cartoons on government buildings have also not received any criticism.

However, the ministry noted that the country disregards freedom of expression when Turkey voices facts, especially about the YPG/PKK terrorists.

The two NATO allies are at loggerheads over a range of issues including maritime rights in the Eastern Mediterranean, Libya, Syria and the escalating conflict between Armenia and Azerbaijan over occupied Nagorno-Karabakh.

Macron on Wednesday said he won’t prevent the publishing of insulting cartoons of Prophet Muhammad under the pretext of freedom of expression, a statement that sparked outrage in the Arab and Muslim world. France recently launched an extensive witch hunt against the Muslim community following Macron calling Islam a problematic religion that needs to be contained. Many nongovernmental organizations (NGOs) and mosques have been shut down in the last two weeks, while assaults against Muslims have peaked.

Macron this month described Islam as a religion “in crisis” worldwide and said the government would present a bill in December to strengthen a 1905 law that officially separated church and state in France. He announced stricter oversight on schooling and better control over foreign funding of mosques. But the debate over the role of Islam in France has hit a new intensity after the beheading of teacher Samuel Paty which prosecutors say was carried out by an 18-year-old Chechen who had contact with a terrorist in Syria.

In Egypt, the grand imam of al-Azhar, Sheikh Ahmad el-Tayeb termed the anti-Islam remarks as a “systematic campaign to drag Islam into political battles.”

“We don’t accept to see our symbols and holy sites being a victim to cheap bargaining in electoral battles,” he said in a statement.

In Libya, Mohammad Zayed, a member of the Presidential Council, condemned Macron’s insults against Islam. “Prophet Muhammad’s status will not be affected by malicious statements or trivial drawings,” he said.

Yemeni Minister of Religious Affairs Ahmad Attiya retweeted calls for boycotting French products in response to the anti-Islam campaigns. In Jordan, the Muslim Brotherhood group described Macron’s statements as “an aggression on the (Islamic) nation and amounted to malice and hateful racism.”

Palestinians also gathered together in Gaza, protesting Macron for his hate speech.

In northern Syria, scores of civilians demonstrated in protest of Macron’s statements and the republications of the anti-prophet cartoons.

Protesters in the cities of Jarabulus and Tal Abyad burned photos of Macron and held banners defending the prophet.

“Islam is a religion of peace and has no place for terrorism; France is the source of terrorism,” said Wael Hamdu, head of the Tal Abyad local council during the protest. “We didn’t forget the killing of 1.5 million people in Algeria by France,” he added.

Similar protests also have taken place in Syria’s Deir el-Zour. However, these protests had to face the brutality of the YPG/PKK as the terrorist group opened fire on protesters, injuring two people.

Pakistani Prime Minister Imran Khan on Sunday also accused Macron of “attacking Islam.” In a series of tweets, Khan said the remark would sow division. “This is a time when Pres Macron could have put healing touch & denied space to extremists rather than creating further polarisation & marginalisation that inevitably leads to radicalisation,” Khan wrote. “It is unfortunate that he has chosen to encourage Islamophobia by attacking Islam rather than the terrorists who carry out violence, be it Muslims, White Supremacists or Nazi ideologists.”

However, despite his harsh words marginalizing Muslims, Macron continues to receive support from both his government and the European Union, both of which ignore the outrage among the Muslims.

French Foreign Minister Jean-Yves Le Drian on Sunday accused Turkey of “trying to whip up hatred” against France, continuing a war of words between the two NATO allies over Islam. Le Drian slammed the “insults” against Macron, describing them as “unacceptable conduct” from an ally.

Ankara’s “hateful, slanderous propaganda against France” revealed a desire to “whip up hate against us and in our midst,” he added.

The EU’s top diplomat, Josep Borrell, on Sunday also condemned Erdoğan for making what he described as “unacceptable.”

“The remarks by President Recep Tayyip Erdoğan regarding President Emmanuel Macron are unacceptable,” Borrell tweeted in French. “Call to Turkey to cease this dangerous spiral of confrontation.”

However, regarding Macron’s insults on Islam, Borrell kept his silence.