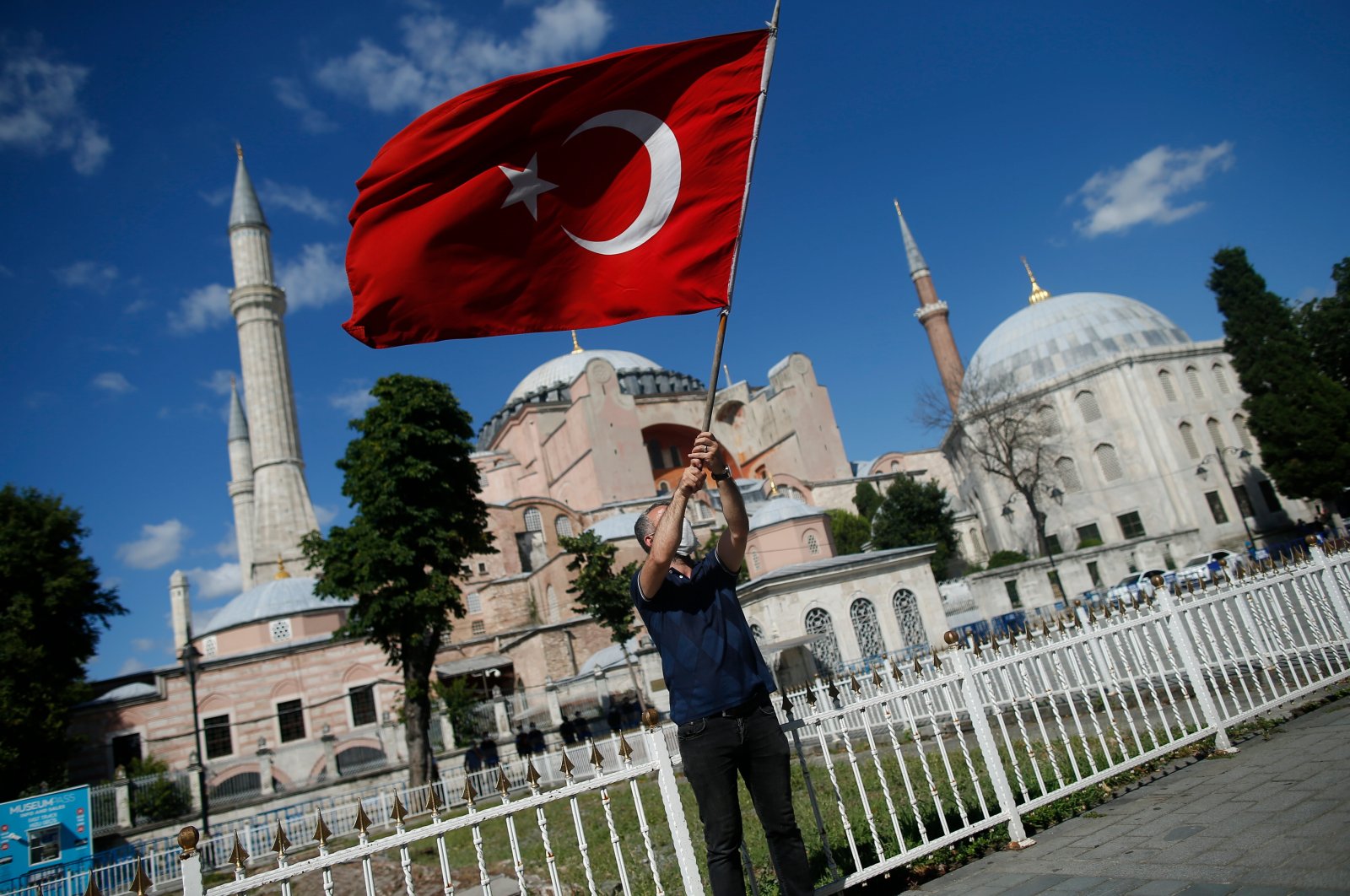 A man waves a Turkish flag outside the Byzantine-era Hagia Sophia, one of Istanbul's main tourist attractions in the historic Sultanahmet district of Istanbul, following Turkey's Council of State's decision, July 10, 2020. (AP)
by Anadolu Agency Jul 15, 2020 11:28 am
RECOMMENDED

Political parties and religious groups in two of the world's largest Muslim nations, Pakistan and Indonesia, expressed appreciation of Turkey's decision to turn Hagia Sophia back into a mosque.

In a letter addressed to President Recep Tayyip Erdoğan, the head of Pakistan's Jamaat-e-Islami party, Siraj ul Haq said the news of opening Hagia Sophia for Muslim prayers after 86 years "warmed hearts of Muslims all around the world and particularly in Pakistan."

"Accept our heartiest greetings over the major decision which has reversed the injustice committed decades back," Haq said in his letter to Erdoğan.

After centuries of service as a church under the Byzantine Empire, Hagia Sophia was converted into a mosque by Ottoman Sultan Mehmed II following his conquest of Istanbul in 1453.

In 1935, Hagia Sophia was converted into a museum.

"The Hagia Sophia is the amanat (deposition) of Fatih Sultan Mehmed and who better than President Erdoğan can take care of such a huge responsibility," Haq added.

Recalling the Indian top court's verdict last year on the historical Babri mosque, Haq said that at a time when Muslim-majority Turkey is taking the lead in preserving the heritage of Muslims and non-Muslims alike, in India, a neighbor of Pakistan, "the Hindu nationalist government has once again attacked centuries-old Babri Masjid and demolished it to construct a Hindu temple."

Babri Masjid was constructed by Zahir-Uddin Babur, an ethnic Turk, and his Mungal empire ruled over South Asia for nearly 300 years.

"Likewise, Hindu fascists are eyeing thousands of other mosques in India which are under threat. They have already begun a demographic change in Indian-occupied Kashmir, which is a Muslim-majority region," he added.

On Friday, a top Turkish court annulled a 1934 Cabinet decree, which had turned Istanbul's Hagia Sophia from a mosque into a museum.

This verdict by the country's Council of State paved the way for its use again as a mosque after 85 years.

It ruled that the architectural gem had been owned by a foundation established by Mehmed II and presented to the community as a mosque, a status that cannot be legally changed.

Responding to diverse reactions from the international community, Emhas said any decision of a judicial institution in any country would not satisfy all parties, but "this move must be respected."

Wahid Ridwan, the body's secretary for international relations and cooperation, said the reopening of Hagia Sophia as a mosque is the full right of the Turkish government and people.

"The change in status was carried out in a legal and bureaucratic process as a democratic country, so it does not need to be contested internationally since it had gone through a very accountable process," he told AA.

Ridwan said this step portrayed tolerance and development of world civilization in the harmony of religions.

"The pressure will not change the stance of government and people of Turkey. The West must understand that their view of Islam is very narrow," he said.

He added that criticism over the decision is unnecessary as Turkey will open the complex to visitors of all religions.

Meanwhile, Surahman Hidayat, a member of parliament from the Prosperous Justice Party, said the decision was Turkey's sovereign rights and needs to be respected.

"Everyone must respect the Turkish legal system and authority, its internal sovereignty and long history of the nation," he told AA.

He added that changing the status of Hagia Sophia to a mosque means it will be open every day for visitors and everyone can enter the complex.

Ahmad Baidowi, a deputy from the United Development Party, said the reversion of Hagia Sophia into a mosque is Turkey's sovereign right.

"Turkey has its own authority as a country," Baidowi told AA.

He said that Indonesia, as a country that adheres to free and active foreign policy, fully respects Turkey's decision.

"It was ruled by the court and it was changed from a museum, not from other religion's house of worship, so it is not a big problem," he added.

Erdoğan said the historical complex will be ready for worship for Friday prayers on July 24.