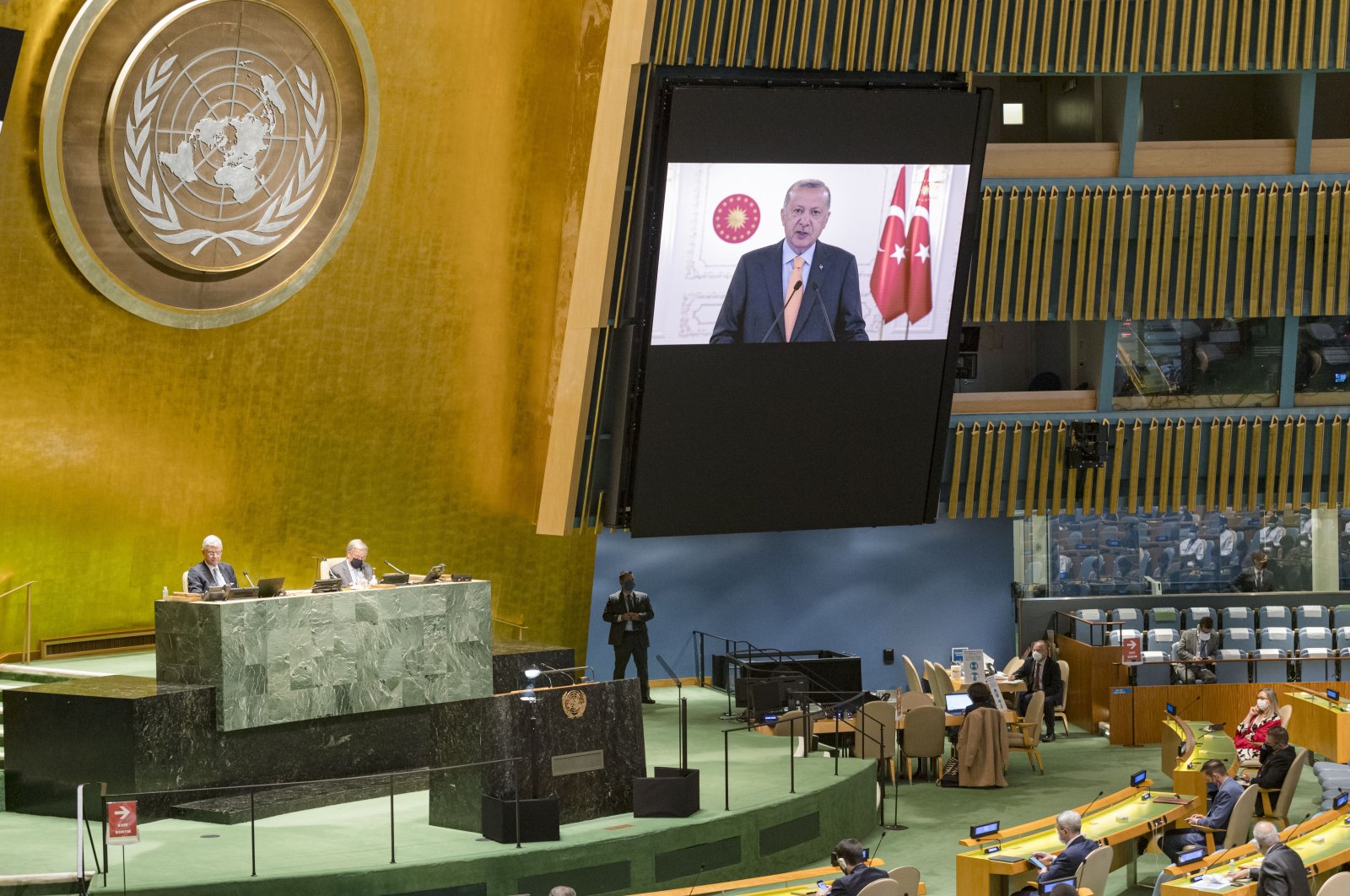 Both Palestine and Pakistan on Wednesday hailed President Recep Tayyip Erdoğan for his speech to the United Nations General Assembly (UNGA).

The Palestinian Foreign Ministry on Wednesday said in a statement, “We must thank the Turkish president for his insistence on reminding the world of the Palestinian people's suffering as well as their right to freedom and independence and his rejection of any initiative that the Palestinian rejects.”

In his speech, Erdoğan said, "Upon rejection of the document of surrender, which was attempted to be imposed on Palestine under the name of the 'Deal of the Century,' Israel this time accelerated its attempts to 'have the inside track' with the help of its collaborators."

"Turkey will not support any plan that the Palestinian people do not give consent to," the Turkish leader said.

"Countries that have declared their intention to open embassies in Jerusalem, in violation of the United Nations resolutions and international law, only serve to make the conflict more complicated with their actions," he added.

U.S. President Donald Trump announced earlier this year his proposal, dubbed the "Deal of the Century," to end the Israeli-Palestinian dispute, alongside Israeli Prime Minister Benjamin Netanyahu, with no Palestinian officials present at the White House event.

Israel occupied east Jerusalem during the 1967 Six-Day War. In 1980, in a move never recognized by the international community, Israel annexed the entire city, claiming it as the self-proclaimed Jewish state's "eternal and undivided" capital.

"Deeply appreciate President Erdoğan once again raising his voice in support of the rights of the Kashmiri people during his address to UNGA," Khan tweeted.

He added that Turkey's unwavering support remains a source of strength for the Kashmiris in their legitimate struggle for self-determination.

On Tuesday, addressing the General Assembly, Erdoğan said the Kashmir conflict is key to stability and peace in South Asia.

"Steps taken following the abolition of the special status of (Indian-administered) Jammu and Kashmir further complicated the problem," the president said, referring to a controversial step taken in August 2019.

"We are in favor of solving this issue through dialogue, within the framework of the United Nations resolutions and especially in line with the expectations of the people of Kashmir," he added.

Munir Akram, Pakistan's ambassador to the U.N., also said his country supports Erdoğan's bold statement on global issues at the General Assembly and his clear stance on Jammu and Kashmir.

In his speech, Erdoğan reiterated his call for the U.N. to declare March 15, the day in 2019 a terrorist killed 51 Muslims in New Zealand, an "International Solidarity Day Against Islamophobia."

The Organisation of Islamic Cooperation (OIC), the second-largest international organization after the U.N., has officially recognized this day, he added.

"On behalf of my party and from the voiceless and oppressed people of Indian-occupied Jammu and Kashmir, I express my deepest appreciation to Turkish President Recep Tayyip Erdoğan for his excellent and bold speech at the United Nations General Assembly session," Nabila Irshad, chairwoman of the Jammu and Kashmir Democratic Party, said in a statement

"President Erdoğan has once again shown that he stands in solidarity with the oppressed people across the world, be that from Kashmir, to Palestine, to Rohingya to Nagorno-Karabakh," she added.

Long-fraught relations between the two South Asian nuclear rivals, India and Pakistan, further flared up after India scrapped the special provisions of the state of Jammu and Kashmir in August last year. Kashmir, a Muslim-majority Himalayan region, is held by India and Pakistan in parts but claimed by both in full. A small sliver of the region is also controlled by China.

Since they were partitioned in 1947, New Delhi and Islamabad have fought three wars – in 1948, 1965 and 1971 – two of them over Kashmir. Some Kashmiri groups have been fighting against Indian rule for independence or for unification with Pakistan. According to several human rights organizations, thousands have been killed and tortured in the conflict that flared up in 1989.